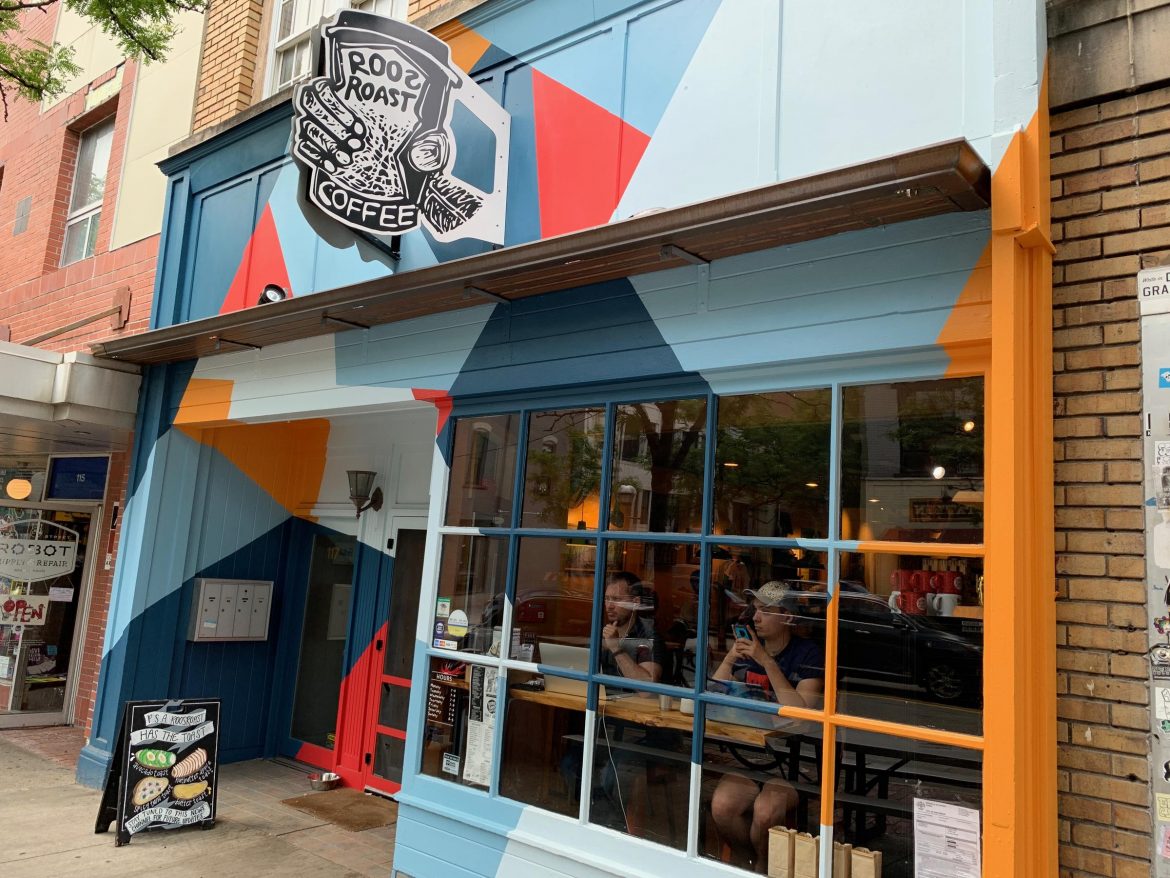 This story was reported by WKAR Radio in partnership with the Knight Center for Environmental Journalism.

John Roos, the owner of Ann Arbor, Michigan-based RoosRoast Coffee shop, thinks hard about what he can do to make his business stand out. Roos takes the quality of his coffee seriously. However, as an environmentally conscious person, he understands the impact coffee-making has on the planet and tries to find ways around that.

“One of the things we do right off the bat is we purchase a lot of products locally, which kind of lowers our carbon footprint,” Roos said.

Running a coffee shop uses a lot of milk. Roos prefers to buy it from Calder dairy, a small business in the area. Not only does it help the local economy, but the bottles are glass.

“We use a lot of milk,” he said. “So that means we have no plastic waste. The glass bottles get returned every week, washed and reused again. So that’s a huge impact right there.”

Like many coffee shops, RoosRoast prepares specialty beans on site and donates the leftover grounds to community gardens. It also offers customers a small discount if they bring in a cup rather than using a disposable one.

Many in Michigan’s coffee industry hope to brew a rich blend of environmental, community and sustainability.

In Ypsilanti, Cultivate Coffee & Taphouse uses part of its space to house a 12-bed garden and donates the produce to local food pantry. Cultivate operates as a nonprofit with proceeds going to more than 170 local programs and agencies.

However, staying environmentally conscious isn’t always as simple as buying local and contributing to the community. How beans are grown is a significant factor for people in the coffee industry.

Phillip Jewell is the chief operating officer of Blue Hat Coffee in Coldwater. One of the biggest things he looks at when buying beans is how and where they’re grown. One of its primary goals is to sell coffees grown without pesticides.

Jewell looks at high-quality flavors, which typically means shying away from beans grown in lower altitudes where pesticides often have to be used and where beans are harvested with machines.

According to David Ortega, an agricultural economics professor at Michigan State University, consumers are interested in knowing more about the origins of their food. In a recent study conducted through MSU, he found that when consumers are willing to pay more when they know more about how their coffee is grown.

“In terms of the coffee shop owners, I think really focusing on conveying the story behind the coffee and who produced the coffee and where it was produced, I think that’s that information consumers are really keen on and oftentimes can fetch a premium,” Ortega said.

While issues like banning plastic straws receive lots of attention from consumers, many in the industry are looking to innovate new ideas.

The owners of Ann Arbor-based Mockingbird Cafe are looking to the future. In the backroom of their shop, amid boxes and crates and dozens of burlap bags of beans, sits a large industrial-sized coffee roaster.

However, their goal is to stay carbon-neutral or carbon-negative, which means offsetting their carbon dioxide emissions, also known as CO2, or removing it altogether.

According to co-owner Peter Woolf, one of the major problems with coffee production is the amount of CO2 released into the atmosphere.

“In Michigan, in the middle of winter, when it’s minus 20 [degrees] outside, most coffee roasters here are roasting coffee,” Woolf said. “And then they have a smokestack that comes out, which is about 1,500 degrees Fahrenheit – it’s enough to melt aluminum.”

However, that heat can recaptured.

Rather than seeing the emissions as unusable waste of the coffee roasting business, Mockingbird has created a piping system to re-direct that heat. The owners can use it to heat their store and water, and are working on using it to heat the entire building, which houses about a half-dozen other businesses.

They also plan to use the open lots around their building for a garden and use the plants they grow in the beverages and food they sell. Another goal is to sell to other businesses, so they can further reduce the CO2 emissions used to import fruits and vegetables.

They want to share their ideas and push their work as a new standard within the coffee industry and other industries.