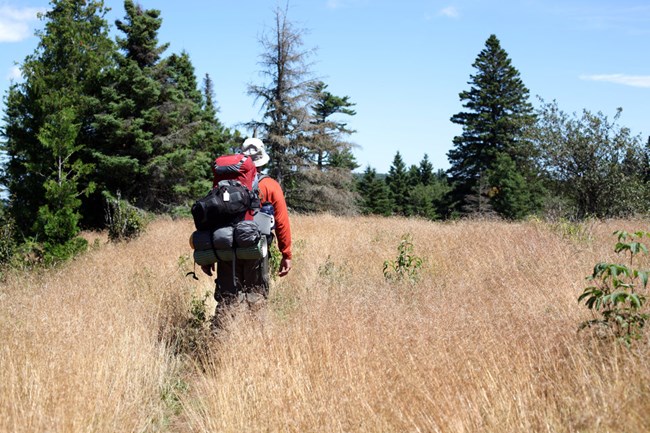 This article originally appeared on MichiganTrailMaps.com. Reprinted with permission.

My hiking partner then gently stripped off the wool sock and examined the souvenir he picked up that day while hiking the Minong Ridge Trail: a blister on the back of his heel.

“That’s a tough trail but it’s a scenic one,” said the backpacker from Virginia. “I’d say the views are worth enduring a blister or two.”

Few backpackers who have walked this 29-mile route will argue with Sheehan-Dean that Minong Ridge is one tough trek. It’s not only the most challenging stretch of the park’s 161-mile trail system, but it’s arguably the hardest hike in Michigan.

And that’s the way the National Park Service intends to keep it.

“We managed it to be a more challenging hike so people can expect fewer hikers and more solitude,” said retired park ranger Larry Kangas. “That’s the appeal of it for many backpackers – the trail’s rustic and rugged nature.”

The Park Service cut the Minong Ridge in the mid-1960s as a “fire manway,” a route firefighters could use to access the isolated northern half of the island.

Almost from the beginning, backpackers began following it and eventually the Park Service decided to maintain Minong Ridge as a primitive trail with as few markers, bridges and boardwalks as possible.

To that extent, the Minong Ridge hasn’t changed much over the years. It’s still an up-and-down hike along a trail that at times you have to search for.

Part of the challenge of Minong Ridge is the amount of time needed to hike it. The trail itself is a three-to-four-day walk from McCargoe Cove Campground to Windigo, the park’s ferry port at the west end of the island.

But most backpackers also need another two days to reach McCargoe Cove from Rock Harbor, the park’s port of entry at the east end that services the ferries from Michigan.

Carrying six days’ worth of food and fuel makes for a heavy backpack on a trail where you want to be as light as possible.

That’s the other challenging aspect of the Minong Ridge. Portions are a path in woods but much of it is a route along a rocky ridge where an occasional rock cairn is the only indication you’re headed in the right direction.

The two days of hiking from Rock Harbor to the start of the Minong Ridge proved to be ideal. We were able to earn our “walking legs” on easier paths while lightening our food bags.

When we departed McCargoe Cove, it didn’t take long to discover the true character of this trail. Almost immediately, we faced a steep climb through the woods. Within 2.5 miles, we were following the rocky crest of the ridge when we were rewarded with our first spectacular view.

Standing on the sharp edge of a bluff, we could see the north shore of Lake Superior on the horizon, Otter Lake straight below us and seemingly half the island, including Todd Harbor, our destination that afternoon.

The most intriguing part of the Minong Ridge was the third day when we walked from Little Todd Harbor to the North Lake Desor Campground.

It’s a trek of only 5.7 miles but you spend almost the entire day on the open ridges hiking from cairn to cairn. The few times we weren’t on the crest of the ridge, we were climbing to the next stretch of rock.

Such long spells on rough rock are jarring on the ankles and tough on the knees. Trekking poles were a huge help but the best thing we could do was just take our time and stop often.

And we wanted to. The day was almost a continuous panorama of the island, Lake Superior and Canada only 14 miles to the north.

Late that night we returned to the open ridge with our sleeping bags to wait for the Northern Lights while stargazing with clarity never possible in a city.

The longest day on the trek was the final one, a 13-mile hike from Lake Desor to Windigo. It begins on the ridge but descends often into the forest where we twice had to tiptoe across a beaver dam to continue the walk.

When we were 3 miles from our destination, we finally reached the last bit of rock of a long hike, a spot called Minong Ridge Overlook. We paused briefly to enjoy the view but then hurried to the well-deserved warm showers and the gooey junk food that awaited us in Windigo.

An easier way to reach the start of the Minong Ridge Trail is a water-taxi drop-off operated by Rock Harbor Lodge and Marina. To return to Rock Harbor from Windigo after hiking the Minong, book passage on the Voyageur II.