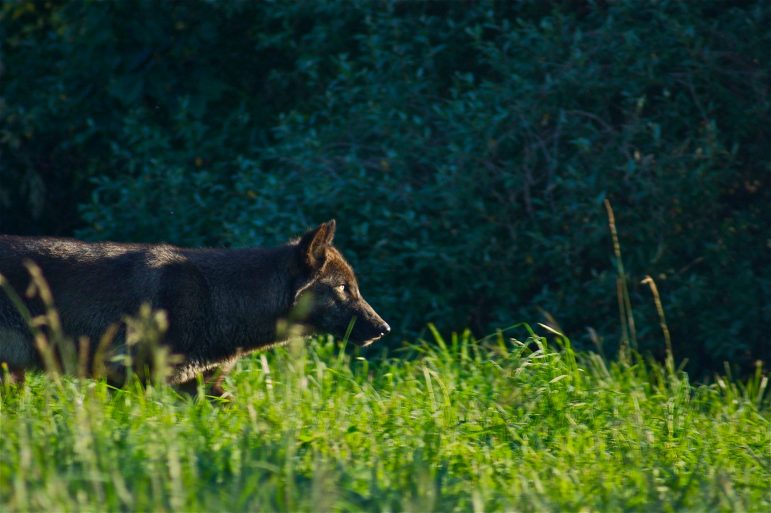 Should Upper Peninsula fish fear wolves? Or thank them?

A clue may be in Yellowstone National Park studies that show fish populations are rising there since the gray wolf population boomed. Meanwhile, other scientists are studying how wolves catch and eat fish in Minnesota.

In 1995, 31 gray wolves were relocated from Canada to Yellowstone National Park after they were absent for around seven decades, according to an Oregon State University study reported in the Forest Ecology and Management Journal.

The addition of gray wolves, that have successfully repopulated in Yellowstone, added another top predator for the ungulates to fear, causing their grazing habits to change, said Brendan Nee, a fisheries researcher for the United States Geological Survey. Instead of grazing in the open and eating the vegetation that gave them cover, the ungulates began to graze less of it.

As fewer trees and cover are grazed, they become more dense, according to the Oregon State University study. That provided more cover over the water which affects multiple factors for the fish. Extra cover causes streams to cool. It also provides more nutrients – creating a better habitat for fish to thrive in. The cover also protects the stream banks from erosion – allowing more space for more fish.

More cover also give fish a place to hide from predators, according to Canadian research in the Environmental Review Journal. More shade from cover causes water oxygen levels to increase and nitrogen levels and algae levels to decrease – resulting in a better habitat. 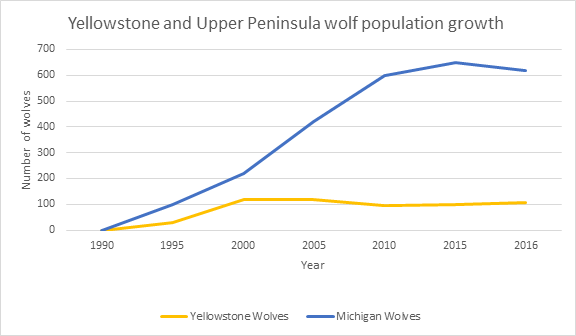 Now with a recovered population of wolves for the deer and elk to fear, that may allow vegetation to grow better and improve the habitat for fish, Nee said.

Apex predators like wolves could affect northern Michigan white-tailed deer and elk behavior and the entire ecosystem, said Dean Beyer, a wildlife research biologist at the Michigan Department of Natural Resources. Such impacts are called trophic cascades, a theory advanced by the famous naturalist Aldo Leopold, according to an article in the scientific journal, Bioscience. 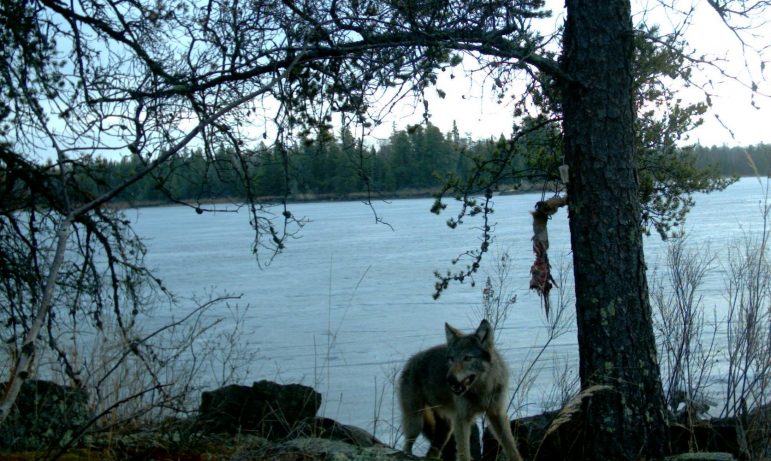 A wolf lured by bait is caught on a surveillance camera in Voyageurs National Park. Image: Voyageurs Wolf Project

In 1910, Michigan’s Upper Peninsula wolf population was eliminated. In the 1980s and 1990s it recovered. And nothing has really changed in fisheries yet, Beyer said.

“It’s possible, but I wouldn’t expect a giant change in fisheries, not as large as the impact in Yellowstone,” Beyer said. “Wolves were able to recover, and habitats recovered, but nothing that extreme should happen in northern Michigan.”

That’s because the northern Lower Peninsula has a lot of agriculture that needs to be protected, Beyer said. If needed, farmers would be given conflict management techniques to protect their farms and livestock from wolves. Such techniques could include educating farmers about threats, guard dogs, traps and even lethal force depending if wolves are on the federal list of protected species or not.

There is an ongoing debate about wolf impacts on ecosystems, said Thomas Gable, a doctoral student at the University of Minnesota, who studies wolf predator-prey dynamics.

“Even in Yellowstone, I don’t think everyone necessarily agrees that wolves have the profound impact that people have said they do,” said Gable, a Midland, Michigan, native.

“I do think it is unknown what role wolves are actually having there, and even [in] places like Minnesota and Michigan,” Gable said. “It is a really difficult question to get after – how a top predator is impacting their ecosystem.”

That doesn’t mean that wolves don’t affect fish. In Voyageurs National Park in Northern Minnesota, Gable’s research team found wolves that hunted and killed freshwater fish like northern pike and white suckers. It is not unusual for wolves to hunt salmon in coastal areas, as they are big, easy to catch and predictable, Gable said.

That said, Voyageurs National Park is one of only a few documented areas where wolves have been found hunting freshwater fish, Gable said.

“Wolves are highly adaptable animals, and they are really good at figuring out ways to take advantage of foods sources,” Gable said.

With a large population of wolves and abundance of freshwater, wolves might start hunting fish in the Upper Peninsula as well, Nee said.

Even if wolves fish, they may not have a huge direct impact on fisheries. Gable hopes to find out by continuing to study that behavior in northern Minnesota, and soon in Wisconsin and Michigan.

“We found that wolves are eating suckers here in northern Minnesota, but we don’t think that’s having any impact on the sucker population,” Gable said. “They are eating them for a short period of time, while the fish are spawning.”

One thought on “Are wolves fish friends or foes?”