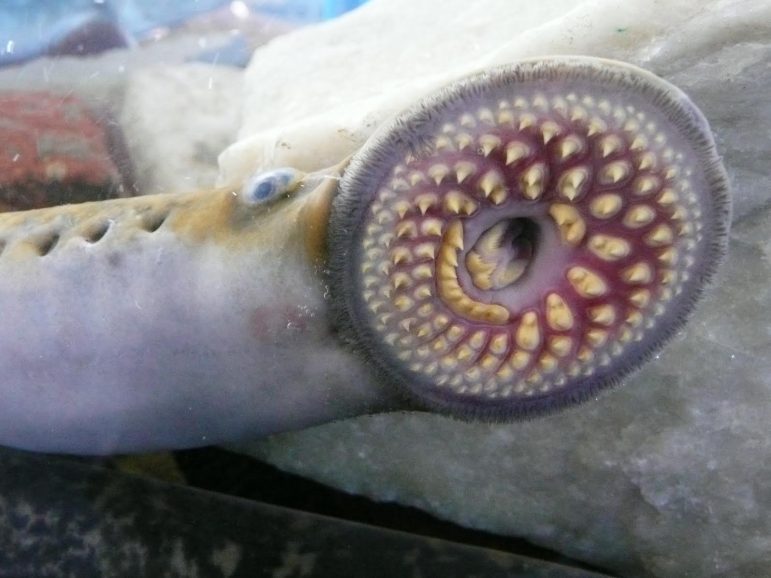 The sucker mouth of a sea lamprey, an invasive species that latches on to native fish and feeds on their blood. Research on new methods to control sea lamprey population is ongoing in the Great Lakes region. Image: T. Lawrence, Great Lakes Fishery Commission.

How a sea lamprey responds to the threat of predators could be another key to keeping their population under control, according to researchers.

Using a sharp-toothed, jawless sucker mouth, sea lampreys suck blood and bodily fluids from other fish. A single sea lamprey feeds on about forty pounds of fish in its lifespan, making it a damaging invasive species.

It’s sensible to research a variety of methods to keep their numbers in check, said Michael Wagner, an associate professor in Michigan State University’s Department of Fisheries and Wildlife. Ongoing research at Hammond Bay Biological Station off Lake Huron investigates using sea lamprey odors to do that.

Odors are essential to sea lamprey reproduction, like when male sea lampreys emit scents to attract mates. But another odor plays a role in allowing them to avoid predators. It is called an alarm cue, Wagner said.

“An alarm cue is a mixture of chemicals that’s aggregated in the skin,” Wagner said. “When animals attack, the skin is ruptured. They [chemicals] can be released into the water and drift downstream, and other lamprey can smell that and avoid it.”

Say an otter kills a sea lamprey. The odor released from the sea lamprey’s body travels downstream, creating the cue that tells other sea lampreys there’s danger nearby.

“An alarm cue is what’s called public information, something that’s just broadcast out to the environment that doesn’t affect the sender in any way,” Wagner said.

Deploying that alarm cue repellant alongside other odors, like pheromones, could be used to guide how lampreys decide where to travel.

“The combination of these odors and the ability to sort of repel them from one area and attract them to another – that provides a potential big benefit for the program,” Wagner said.

The goal is to steer sea lampreys away from native fish and to streams where they could be trapped, removed and killed, said Mikaela Hanson, an MSU fisheries and wildlife master’s student.

Other methods of reducing sea lampreys have been successfully in use for a long time, said Marc Gaden, communications director for the Great Lakes Fishery Commission which is supporting the research.

Lampricides – unique pesticides developed to destroy sea lampreys – have been deployed in the region for decades. They are deposited into streams where sea lampreys live as larvae, before they grow that lethal mouth.

“It’s applied in liquid form and it kills the lamprey larvae and doesn’t harm the fish in the concentration that it’s used,” Gaden said.

That project has been ongoing since 2016, Flinn said

Flinn wants to develop the contraption to separate the native trout and the salmon prized by anglers from the sea lampreys. 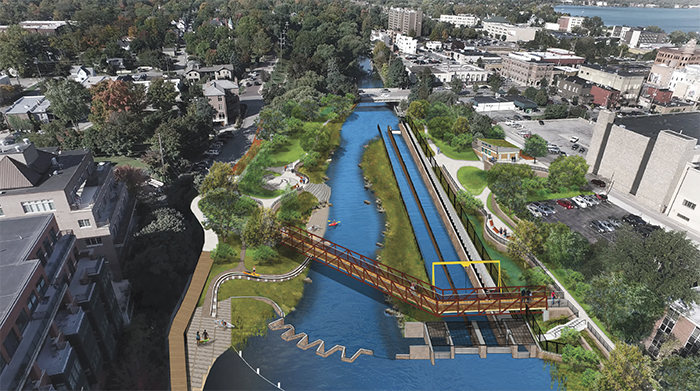 If the model for the contraption is approved, sea lampreys could be trapped and pulled from the waters by hand. Fish would be sorted into different channels using water velocity barriers, ladder traps and even light guidance.

It’s ideal to research multiple methods of sea lamprey population control, Gaden said. There’s no aquatic species large enough in numbers to keep them in check – they’re at the top of the food web.

“If they didn’t exist, we would have no chance at control,” Gaden said. “We would not have the $7 billion fishery we have.”

In the long run, such methods of sea lamprey control have been successful in the Great Lakes.

In areas where sea lampreys thrive, native fish populations, like trout and salmon, are reduced. That creates an imbalance in the Great Lakes ecosystem, Hanson said.

“They deflate the Great Lakes economy,” she said.

It’s economical to have multiple control methods, Gaden said. For instance, no studies have shown lampricides to have harmed water quality or the environment. But alarm cues, if successfully tested, could be used with or in place of lampricides or construction of dams. That would reduce costs.

“There’s no other invasive species, certainly aquatic invasive species program in the world that is as successful as we are, especially on a basin-wide level or on the scale that we do,” he said.