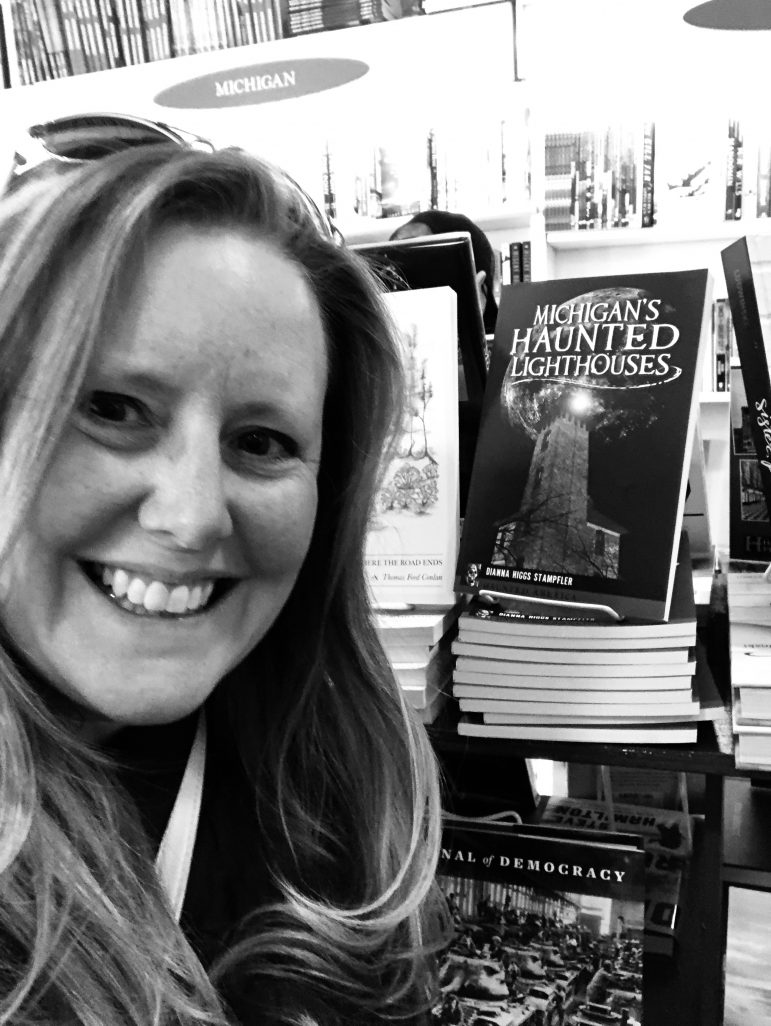 The White River Light Station in Whitehall might never have existed had it not been for the dedication of Capt. William “Bill” Robinson III.

Robinson moved to the the area in the 1860s with his wife, Sarah, and seven of their children. He petitioned the lighthouse service to have a beacon built, and until it was he hung a lantern on a pole at the mouth of White River to aid the passing ships.

The lighthouse was finally lit in 1876, and the Robinsons were the first keepers. Capt. Bill died while keeping the light lit at the White River Light Station.

Some say he’s still at it.

Karen McDonnell, who lived at the light from 1983 to 2012 as a modern-day keeper and museum curator, has had countless encounters with the ghosts of both Capt. Bill and Sarah.

She heard his footsteps on the staircase leading to the lantern room, she said.

“I like the comfort it gives me, “ McDonnell said. “It’s like a watchman, just making sure everything is okay before it’s too late at night.”

Her tale is among those told by Dianna Higgs Stampfler’s “Michigan’s Haunted Lighthouses,” published by The History Press. It includes information that Stampfler has been researching and writing about for nearly 20 years.

“Many of these haunted sites exist because spirits of former lighthouse keepers just did not want to leave,” Stampfler said.

Nearly one-fifth of all the lights in the state have a ghostly story to be told, she said.

Lighthouse keepers took their jobs seriously. Some held the position for more than 40 years. Sometimes lighthouse keeping was a family business. The tasks were split between husbands and wives, children and grandchildren. 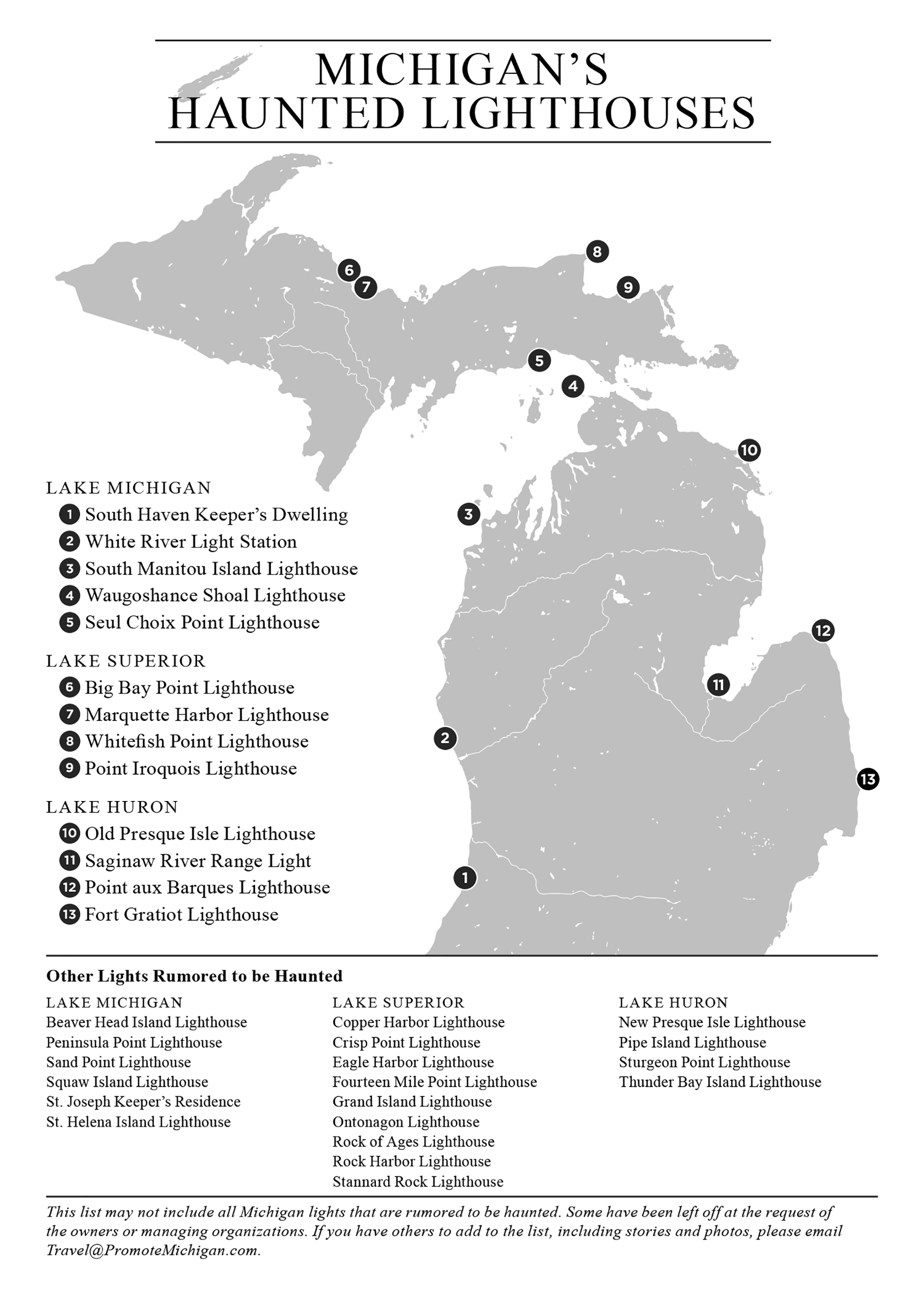 The Michigan lighthouse with the most ghostly activity is Waugoshance on the Straits of Mackinac off the northern Lower Peninsula, Stampfler said. It is said to have been haunted for more than 100 years.

Even the most haunted lighthouses fail to scare her.

“People expect it to be like, ‘oh this ghost scratched me!’”

None of these stories have been like that, Stampfler said. “They have mostly been sightings of people who died during shipwrecks. There has never been attacks on people or destruction of property.”

Stampfler has written professionally since she was in high school. She graduated from Western Michigan University with majors in English and broadcasting.

Along with writing, she handles public relations, marketing, social media and events for Promote Michigan, a public relations consulting company that is, “an outlet to promote all things about the Great Lakes State … its people, places and products from coast to coast,” according to her website.

Her background in journalism is helpful for tracking down haunted activities.

“You have people who are adamant that there are no ghosts,” she said. “I wanted to make sure I was sharing both sides of that. The bottom line is the family history, the keepers and the family histories themselves are true. The perception of the ghost is questionable to each individual person.”

Her stories come from lighthouse museums, friends and family. She enlisted her father, a genealogist, to help dig up family history of the lighthouse keepers. Google helped her find ghost stories and she even used reviews with haunted happenings from TripAdvisor and Yelp to find good leads.

Some skeptics question the truthfulness of these ghost stories.

“We definitely understand the fascination of haunts and ghosts—after all, as historians, perhaps we are more in tune with dead people,” said Emily Stap, who is the archives and office manager of Michigan Maritime Museum. “As a reputable museum, we strive to provide the public with facts and truths regarding the past.”

Since 1997, Stampler has been presenting programs about Michigan’s historic lighthouses, ghost towns and other unique places across the state. That’s how she landed the book deal in March of 2017.

The publisher had been googling the topic and found out about her presentations.

She picked what lighthouses to use from the 36 she knew were associated with ghost stories.

“I tried to pick ones with the best stories and photos,” she said. “I also tried to spread it out geographically so I was getting lights on as many of the Great Lakes as I could.”

Readers can visit many of the lighthouses featured in the book, and have the opportunity for ghostly experiences themselves. Those interested in a ghostly lighthouse encounter could volunteer as a keeper at South Manitou Island’s historic lighthouse—one of only a few locations in the state where such an offer is available, Stampfler said.

“The book is a chance for me to sell something that people take away after my presentations,” she said. “It enhanced something that I was already doing. This publisher doesn’t do sequels. But, we are talking about other topics I have equally historic knowledge of.”

In the meantime, stop by the White River Light Station and keep an eye out for Capt. Bill who continues his nightly rounds 150 years later—to the shock of the temporary staff. The captain’s wife, Sarah, is also helpful, McDonnell said. 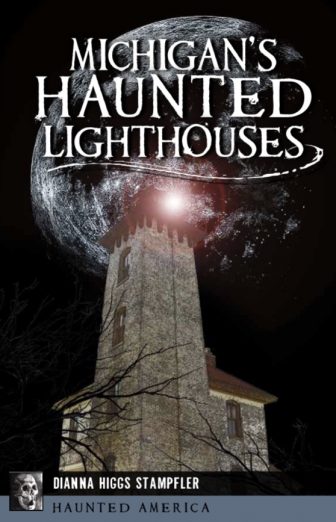 Once McDonnell left the upstairs bedroom to take a call. When she returned, she discovered someone had finished her dusting—even though she was alone.

The cleaning supplies were even moved from one side of the room to the other.

“Michigan’s Haunted Lighthouses” is $19.99 plus tax at https://promotemichigan.com/haunted-lighthouses-book. It can also be purchased at the Michigan Historical Museum store and more than 20 bookstores and gift shops statewide.

One thought on “Haunting tales of Michigan’s lighthouses”