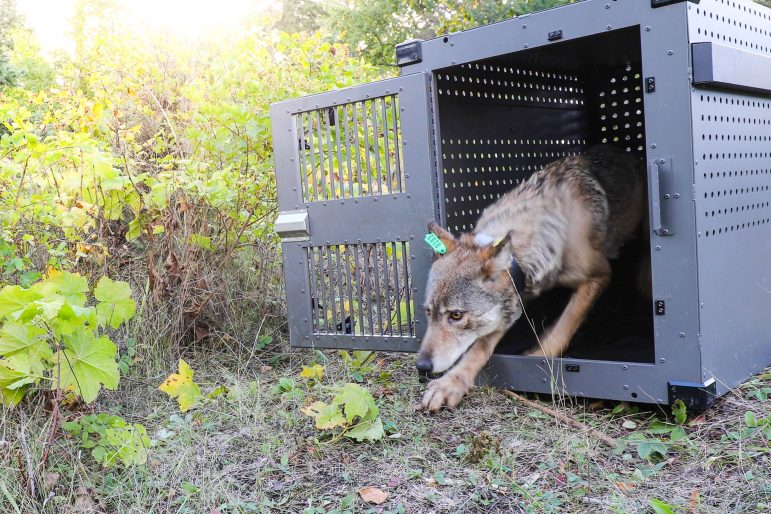 The recent transfer of six starving wolves to Isle Royale benefits not only them but the island’s entire forest ecosystem.

For the past three years only two wolves populated the 207 square mile island in the northwest of Lake Superior, according to the National Park Service. The male is the female’s father as well as half-brother, said Sarah Hoy, an assistant professor at Michigan Technological University who studies how the increasing moose population affects the island.

Though there were multiple attempts by the highly inbred pair to breed, Hoy says that none of the offspring survived past the year due to deformities.

Six wolves from the Canadian island of Michipicoten located in the northeastern portion of Lake Superior faced starvation. To save them and establish a viable breeding population they were brought to Isle Royale on March 25. That follows the introduction of four wolves from Minnesota and four from Canada earlier the same month.

Venues the park staff have for public feedback before the reintroduction effort expressed some concern for whether this was the right call. People questioned if this would be tampering with the ecosystem too much, diminishing the credibility of a longtime predator-prey study of the island. This feedback was heavily considered by the park but it was ultimately decided to follow through with the effort, according to Liz Valencia, chief of interpretation and cultural resources for Isle Royale National Park.

“You need to be able to control the moose population,” Hoy said. “The most natural way to do that is by releasing their natural predators on the island.”

Since the wolf population plummeted the moose population on Isle Royale has grown rapidly to 1,500 to 2,000 individuals, Hoy said.

Moose can eat almost 40 pounds of vegetation daily, Hoy said. With as many as 2,000 moose on the island that would mean that almost 40 tons of vegetation could be consumed by moose each day. This severely damages the forest, particularly species that moose favor as food, such as balsam fir which is their main winter food source.

“None of the trees are able to grow up to become mature trees,” Hoy said.

This impacts other species on Isle Royale that eat or nest in the vegetation that moose are consuming, Hoy said. Animals such as beavers inhabit the island and use trees for food and constructing their iconic dams.

Isle Royale provides an ideal study site for the wolf-moose project, established in 1958 and now the longest running continuous predator-prey study, according to the Wolves & Moose of Isle Royale website.

The island is isolated from the mainland, there is no hunting on it and wolves are the sole predators of moose in the ecosystem. It’s easier to manage an intact ecosystem, Hoy said, because each species acts as an instrumental part of a greater whole.

What does this conclusion mean for the systems where wolves and large predators have been removed?

Federal extermination programs and human conflict substantially reduced the gray wolf population in the United States until they were listed under the Endangered Species Act in the 1960s, according to the Center for Biological Diversity.

Since their listing, there has been improvement, but today 5,000 to 6,000 wolves occupy less than 10 percent of their historic range, according to the Center for Biological Diversity.

It’s difficult to study the overall impact of the loss of wolves on an ecosystem, but if the removal of wolves leads to a big increase in large herbivores, like moose and deer, then it is likely to cause a lot of damage to forests, Hoy said.

So far the newly introduced wolves seem to be settling into their new island home just fine, Valencia said. Some have even been traveling together based on the data from their tracking collars. Some may interpret this as pack formation, but Valencia isn’t so quick to draw conclusions.

How these wolves will interact and what pack dynamics may form is difficult to predict. Researchers have observed the formation and dissolution of many packs over the course of the study but have never been able to clearly predict these changes, Valencia said.

“Wolves will do what they do,” Valencia said. “There may be a number of smaller packs and they may fight.”

Warfare over territory between packs is a possibility. But the abundance of moose and other prey may mitigate this, Valencia said. How the wolves are interacting will become more clear once researchers and park staff can look at the tracking information for a few weeks.

The staff of Isle Royale National Park plans on doing more reintroductions some time at the end of this year or beginning of 2020, Valencia said.

“It’s really exciting to finally have more wolves on the island,” Hoy said.

2 thoughts on “Can hungry wolf immigrants save Isle Royale forests?”