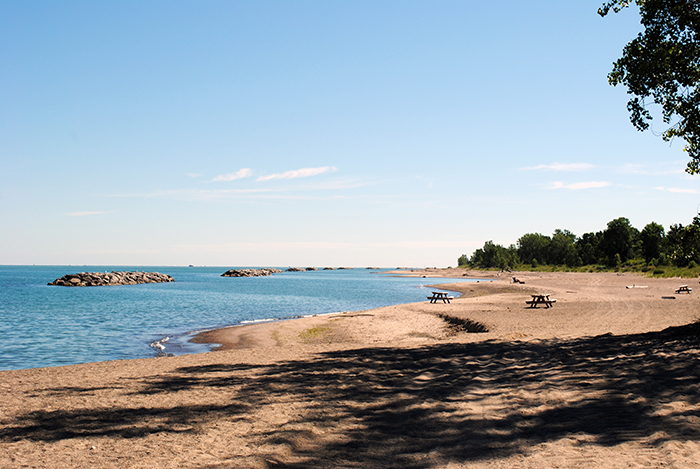 Warm weather during the winter can sound appealing, but it is not ideal for preventing erosion.

With recent temperatures reaching the upper 50s, the ice at Pennsylvania’s Presque Isle State Park is getting beat up to the point that it no longer protects its Lake Erie beaches, park officials say.

Severe erosion occurs when waves travel in deeper water, according to Pennsylvania’s department of conservation and natural resources. The waves are less likely to hit the bottom of Lake Erie – making them more powerfully flood the shore.

The beaches that face most erosion are in the middle of the park. They are geographically set up to receive a prevailing northwest wind that comes across Lake Erie and mainly hits the midsection of the park, said Mathew Greene, the park’s operations manager.

Ice dunes form on the shore and protect the beaches from erosion, but ice has been sporadic, he said. Erosion takes away sand when the beaches lose ice protection mid-season.

That does not mean ice stops erosion, but it slows it down.

Presque Isle has had higher than average lake levels since 2015, Greene said. The combination of high winds and waves, along with higher water levels have brought erosional forces much higher than normal lake level years.

With warmer weather preventing ice, Greene said waves have risen even further up the beach and exacerbate erosion in areas where water levels are usually lower.

Once heavy winds and waves start to drop, springtime brings relief. Around March, April and May, the beaches get a light, natural replenishment from sand that erodes again in the winter. Lower wave action in the summer allows sand to be pushed back up from underwater and onto the beaches.

But natural replenishment is not enough.

The park pays 50 percent of a coordination process to the U.S. Army Corps of Engineers to manage the yearly fund for replenishment and to hire contractors.

This year, $3 million will go toward purchasing sand and coordinating the replenishment in areas that have experienced the most erosion. Contractors will conduct a yearly beach walk to determine where to replenish.

“That walk is probably the most important walk we do,” Greene said. “It is going to inform where the contractor is going to be placing sand for this year.”

The park targets about 38,000 to 40,000 cubic yards of sand each year in areas where sand is not naturally received.

Until the beach walk, the weather is unpredictable for now.

“It (erosion) kind of goes in cycles,” Greene said. “We kind of roll with the punches on a regular basis here with what the weather gets us.”