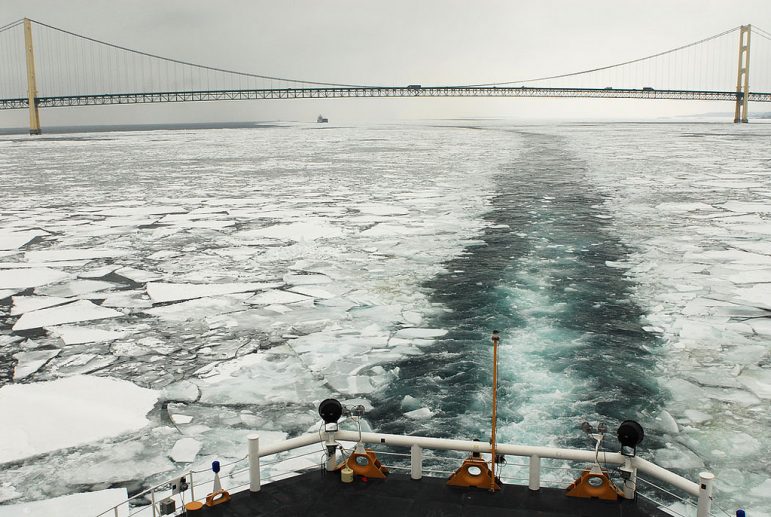 In 2015, the Arthur M. Anderson carrying iron ore across Lake Erie got stuck in ice for five days near Conneaut, Ohio.

Ice causes a lot of problems for Great Lakes ships, from delays at locks to damage to ships.

“Every once in a while they’ll get a hole in them,” said Rayburn, the Cleveland-based organization’s director of environmental and regulatory affairs.

But University of Michigan researchers are changing that. They have a $10,000 grant from the Graham Center for Sustainability to create an ice forecast that’s as usable as the weather forecasts on television.

Such a service is “absolutely important,” Rayburn said.

And the necessary data and ice forecasting models already exist.

“The technique is ready to go,” said Ayumi Fujisaki-Manome, who researches sea and lake ice at the university.

The problem is that the potential users may be challenged to decipher the information the technique produces, said Fujisaki-Manome, the principal investigator on a project working on a translation. Her team is creating a forecast for the Great Lakes Operational Forecast System to be published and maintained by the National Oceanic and Atmospheric Administration.

Similar challenges have already been overcome.

“A good example of this would be a weather forecast,” said Eric Anderson, a researcher at the Great Lakes Environmental Research Laboratory. A weather forecast is technical, scientific data presented in a way the average person can digest and use.

The team will use social science techniques like focus groups and surveys to tailor the forecast to the needs of the Coast Guard and shipping industry, the groups that will use it most.

“It’s a much more rigorous process of matching user needs and gathering feedback from users,” said Devin Gill, the stakeholder engagement specialist at the Cooperative Institute for Great Lakes Research at the University of Michigan.

One feature the shipping industry is interested in is specificity, Rayburn said. A forecast that’s too broad won’t be useful. One that is too specific could be overwhelming and unwieldy. Whether the data will be mapped, plotted or raw is up for discussion, Anderson said.

Using focus groups and surveys is different from what Gill calls the more typical loading dock approach. That’s when scientists ignore users until they deliver the finished product, she said. Instead, this team is answering important questions about the ice forecast before that point.

One facet of the forecast up for discussion is ice thickness, Anderson said. Researchers need to know how specific that forecast should be as ice breakers and commercial vessels manage ice at very different thicknesses.

The research needed for a translated forecast slows the process. An experimental version should be available by 2020 and a final product by 2021, Anderson said. The team thinks the careful approach is necessary.

Fujisaki-Manome estimates Lake Superior’s ice cover increased by 14 percent during the January polar vortex, which is about five times faster than normal.

This unpredictability means the Coast Guard can’t efficiently deploy its ice breakers, Rayburn said. He points to the need for a new ice breaker as evidence that wintertime shipping needs additional help dealing with ice. Congress authorized funds for a new ship, though he worries it won’t be built.

Whether it’s delays at locks or ships getting iced in, each setback causes problems elsewhere.

In 2015, steel mills were getting ready to idle because ships like the Arthur M. Anderson couldn’t deliver iron ore through the ice, Rayburn said.

Whatever form the forecast takes, it will be better because of including the users early in the translation process, Gill said.  And that early inclusion could spill over into the application of other research.

“We’re hoping to continue to improve and to expand this program and I’m really excited about that,” she said.

Editor’s note: This story was updated Feb. 27, 2019 to correct how much Lake Superior ice cover increased during the polar vortex.