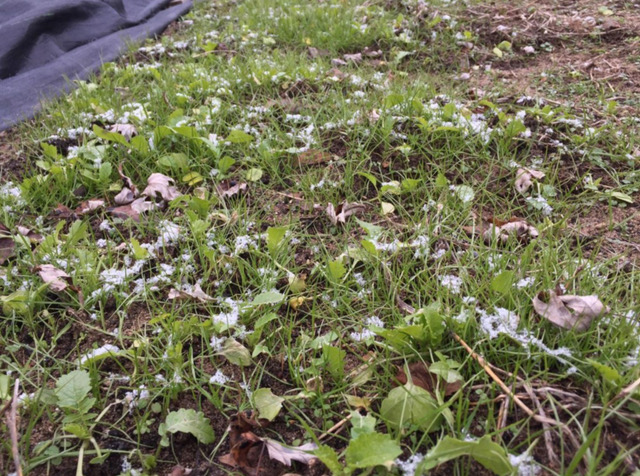 A cover crop mix including spelt and forage radish grows even with snow on the ground at Eighth Day Farm in Holland, Michigan. Image: John Puttrich.

Good Stead Farm in Hope, Michigan,  is trying to do something special year-round: bring fresh produce and meat to some of its neighbors.

Sarah Longstreth, Good Stead’s farmer, delivers to restaurants, farmer’s markets and her neighbors through community-supported agriculture shares. People purchase a share at the season’s start and receive veggies every week from the farm north of Midland.

Along the way they get to know their farmer, too.

Longstreth knows each bit of food she successfully raises starts with the soil.

“We’re very careful,” she says, to “feed the soil, not the plant.” This thinking, although it’s been around for years, is gaining steam with farmers around the country.

Each season she carefully tests her soil, comes up with a fertilizing plan together with her agronomist, and applies fertilizer directly at the roots of each transplanted seedling so none is wasted. She also adds organic matter — usually composted vegetation or manure. 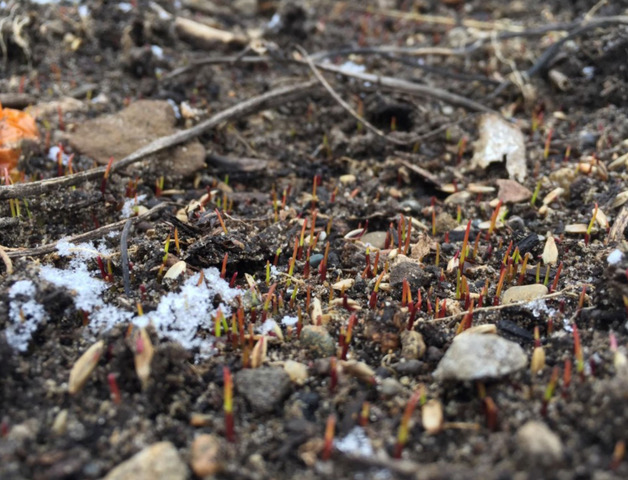 When her saleable crops aren’t growing, she plants cover crops.

Cover crops are plants — winter wheat, buckwheat and clover, for example — that don’t head to market but are turned into the soil or cut down to be used as mulch. When alive and growing, the roots hold soil and nutrients in the field. When tilled into the soil, they add organic material that improves a field’s absorbency.

Longstreth knows that while the ultra-fresh veggies are the stars of the show, the soil is critical to making her veggies’ stardom possible. That soil care not only pays off for her and her clients but the ability of cover crops to hold soil and nutrients in her fields also benefits her neighbors downstream.

Orlando Sarnelle, a professor in the Department of Fisheries and Wildlife at Michigan State University, says, “Nowadays, most of the phosphorus that comes into the western basin of Lake Erie is due to agriculture.”

If the Great Lakes are ever free of nuisance algal blooms, it will be because more farmers adopt soil-smart practices such as cover crops to curtail erosion, researchers say.

Think of a watershed as a huge, horizontal funnel that captures water from a large area and releases it at one narrow exit: a river’s mouth. The watersheds of the Great Lakes Basin capture water in small streams and drains and gather it into larger rivers that eventually drain into the lakes.

That means phosphorus-laden soil runs into small streams across the region and reaches a high concentration when rivers discharge into the lakes. The resulting runoff creates perfect conditions for algal blooms.

Because phosphorus loves to get stuck to soil particles, exposed soil—which is more likely to run off with the rain—is a big problem. Cover crops can keep phosphorus-bearing soil from eroding.

Farmers have used cover cropping for thousands of years. But, when synthetic fertilizer exploded onto the scene in the early 20th century, cover crops fell out of favor. In 2012, only 2 percent of row crop fields in America were planted with cover crops, according to Steve Groff, a cover crop expert in Pennsylvania who cites U.S. Department of Agriculture data. Because of this trend, farmers add more synthetic nutrients to fields more prone to erosion.

In the Great Lakes Basin, rain typically causes erosion. Cover crops stop a lot of erosion because they protect the soil from direct exposure to precipitation and their roots hold soil in the field.

Sieglinde Snapp, a soil researcher at Michigan State University who works with MSU Extension, said a cover crop is like a “living carpet.”

The roots not only stop water from running off the field but also suck water and store it in their leaves, increasing the field’s water-carrying capacity. A bare field can absorb only the water its soil can hold. That same field with a cover crop can hold water in its soil and living plants, she said.

Since future climate models predict the Midwest will receive less frequent but heavier bursts of rain, preventing erosion by capturing more precipitation from more intense rain storms will be extremely important, according to the by the U.S. Global Change Research Program’s 2014 National Climate Assessment.

Cover crops also help farmers unlock nutrients stuck in their soil, which can help keep phosphorus from leaching into the waterways through the soil.

Snapp said research shows that crops use only 40–60 percent of nutrients applied to a field in a season. That number is worse for phosphorus: 25 percent, while the majority remains untouched in the soil, in part, because of fertilizer overapplication. Nutrients unused by plants may enter waterways.

“Phosphorus is one of the most biologically, geochemically complex [nutrients farmers deal with] because it has a lot of different forms.” Snapp said. In short, “It’s super complicated.”

She listed a host of mitigating factors that affect how phosphorus acts in soil: all reasons that managing phosphorus can be onerous for farmers.

Soil type and pH, the type of fertilizer used, the soil’s mineral and biological components and any present organic acids all affect how much and what type of phosphorus is available to crops.

And some plants are better than others at grabbing nutrients from the soil. That’s why you get different vitamins and minerals from a bean than from a beet.

According to Snapp, certain cover crops—like legumes—efficiently grab phosphorus molecules from the soil and transform them into forms more accessible to other crops, although the process by which they do this is still a matter for research.

Because phosphorus gets into the waterways by runoff, it’s important to reduce excesses of phosphorus locked in the soil by making it available to plants.

Why doesn’t every farmer use cover crops?

Snapp said, “Farming is really challenging and could get more so.” She sees farmers as “cutting edge,” but said they need an “active and engaged civil society” supporting them so they can successfully feed the world and support the environment.

They can also be reluctant to try something new.

Colleen Forestieri works with farmers in her role with the Van Buren Conservation District in Michigan, educating them on best practices and helping farmers implement them. The district serves primarily Van Buren, Cass and Berrien counties.

Most farmers work hard to scrape out a living. “They’re burned out,” Forestieri said.

Economic benefits of cover crops can take years to materialize and short-term but less certain gains in production may not be enough to convince farmers to take on a new cost. Cover crops may cost from $30 to $100 an acre, and recouping that money back each year isn’t guaranteed

Besides the immediate and obvious water retention and nutritional improvements, other benefits of cover crops — organic matter content of soil — may take a decade to materialize, Snapp said. Distant and hard-to-see benefits, like preventing algal blooms, can be a hard sell in a world where grain prices fluctuate from year to year.

Forestieri said, “We need to subsidize not just grain but conservation programs.”

Snapp, too, said, “We know how to prevent erosion. We need to support farmers who want to do that so that they can afford cover crops.”

Even so, some farmers adopt these lake-saving techniques for economic or environmental reasons. The Van Buren Conservation District said its programs have stopped 32,000 “dump trucks of sediment” from reaching water bodies each year.”

Since that sediment often carries phosphorus with it, that’s a big step toward preventing algal blooms.

Back on Good Stead Farm, Sarah Longstreth said she feels satisfied with her chances of keeping nutrients from her farm out of the waterways.

After explaining her soil management strategy and robustly researched rotation of cover crops, she said, “I’m pretty happy with my plan.”