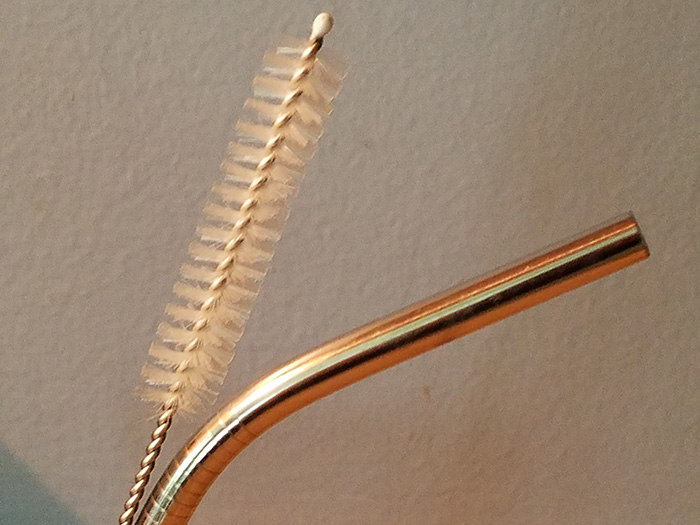 Some pollution critics suggest that permanent stainless steel straws replace disposable plastic ones. They come with a brush to keep the inside clean. Image: David Poulson

Starbucks recently eliminated plastic straws from their coffee shops, the latest attempt to limit their use.

The anti-straw movement is spreading in the Chicago-area and it’s becoming harder to find straws in restaurants around that city.

One-use before tossing a straw might not seem like it has a huge negative impact on the environment, but it adds up into a bigger problem within the world’s waterways. Roughly 22 million pounds of plastic enter the Great Lakes ecosystem each year, according to Chicago’s Shedd Aquarium.

The aquarium began its “Shedd the Straw” campaign on Earth Day in 2017. It convinced more than 125 Chicago-area restaurants and bars to serve straws only upon request, swapping out plastic straws for reusable or compostable alternatives and educating staff and customers on why they are making the change.

This program was intended to cast a light on the dangers plastic straws pose to water systems and the animals that live in them.

“One of our biggest threats to our rivers, lakes and oceans today is plastic pollution,” said Jaclyn Wegner, director of conservation partnerships and programs at Shedd Aquarium. “Animals are threatened by this by accidentally getting entangled in it, swallowing or eating it. When animals eat plastic, it causes them to feel full, stop eating and they may starve to death.”

Plastic does not biodegrade and is nearly impossible to recycle, making it likely that every straw ever used still exists on the planet. Shedd Aquarium researchers note that U.S. residents use nearly 500 million straws a day.

Shedd has partnered with about 20 aquariums across the country through the Aquarium Conservation Partnership to pledge to remove single-use straws from their daily operations. Many of those aquariums have their own straw campaigns, said Maddie Caldwell, coordinator of conservation action at Shedd Aquarium.

Shedd is the first to commit to the partnership in the Midwest area.

“This is a really encouraging example of how consumers can create change,” Caldwell said.

The no-straw movement has been spreading over the U.S., with large companies such as Starbucks joining in.

Emily Alexander, a Michigan State University graduate and a global research and development engineer at Starbucks, developed an answer to plastic straws at the coffee company. She created a strawless lid to rest atop cold drinks. Starbucks plans to eliminate plastic straws from 28,000 of its stores by 2020.

“It’s promising that consumers won’t stop at straws and we will continue to look at other alternatives to reduce plastic pollution,” Caldwell said.