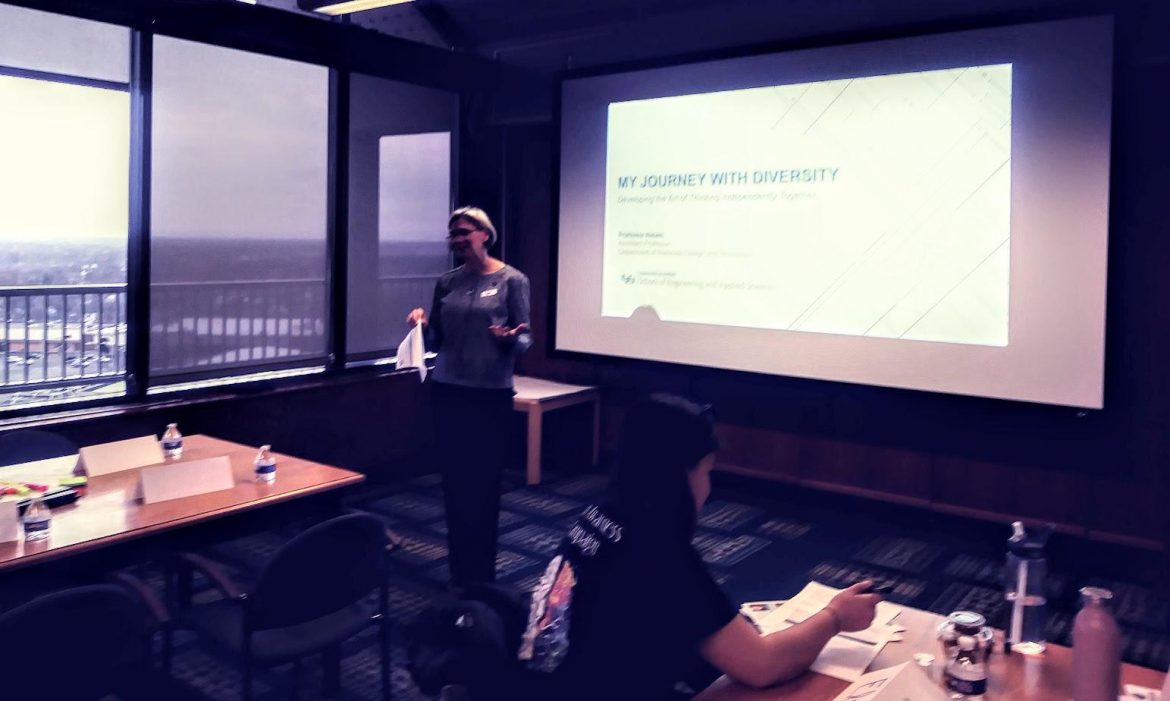 University at Buffalo dean of the School of Engineering and Applied Sciences Liesl Folks, leads the NAVIGATE Project at UB. Image: Angelica A. Morrison

The STEM fields – science, technology, engineering and math – have traditionally been dominated by men. And that can make it tough for women to break in – or gain respect. The Me Too movement is highlighting those issues. And some female professionals in the Great Lakes Region have their own stories about the culture of gender bias.

Inside the Great Lakes Center field station, which is just a few miles away from the Buffalo State campus, Alicia Perez Fuentetaja checks on a collection tiny pet fish.

The field station is where some of her research takes place. She’s an aquatic ecologist well-known for her work with emerald shiners and the detection of antidepressants in the brains of fish from the Niagara River.

She says, as a woman, building a career in the sciences isn’t easy.

“I remember when females in the field would get pregnant or get married the comments from the fellow males would be poof she’s out of the game now, she’s got kids we can’t count on her now,” she said. “Sort of like being a mother somehow affected you’re ability to do your work.”

“If you think someone does or says something inappropriate we tend not to say anything,” she said. “Another hurdle for women if you’re doing very well a man would go speak to the dean and ask for a raise a woman would not, if they ask for a raise, it’s for a little tiny raise not a big one, right.”

In that same PEW Research Group survey, close to 50 percent said they’ve experienced sexual harassment and their gender has made it hard for them to succeed in their field.

Monica Dus knows that feeling. She’s an assistant professor of molecular, cellular and developmental biology at the University of Michigan.

Back, in her undergraduate years, about a decade ago, she recalls a day when she was sent home because she was wearing pink boots.  It was during a science program, where she was showing high school students various experiments.

“It was 830 in the morning, and I was told I had to go change my pink shoes,” she said. “Because it was unprofessional for a scientist to wear pink.”

Unfortunately, the problems didn’t stop with the color of her shoes.

She’s uncomfortable repeating some of the things said to her over years. But, there’s one experience from her undergraduate years she did share.

“I was quite thin, and one of the male graduate students asked me if I got my period, because I was so thin and asked me all other kinds of really inappropriate questions,” she remembered.

University at Buffalo dean of the School of Engineering and Applied Sciences Liesl Folks works to combat those issues. She leads a project called NAVIGATE aimed at giving students the tools to fight against gender bias.

She says all too often women in STEM choose to abandon their careers, because of gender based conflicts at work.

“So, what we see, it’s very, very common for women when they hit these barriers is they take that first step,” she said.

She said the first step starts with telling management or human resources.

“If it turns out badly, and that first action doesn’t result in a positive change in their work environment, what they’ll do, is they’ll go back to their office, and say I’m going to avoid the situation,” she said.

Some of the skills she teaches in the program include forming alliances with coworker. This will help provide support if something should happen. Also, before jumping ship, female STEM professionals should clearly evaluate all of their options.

Additional information on the issue

“Scientist Share the Most Awful Sexist things they have experienced”

For the full thread listing of their experiences visit https://edgeforscholars.org/twitters-scientists-share-the-most-awful-sexist-things-they-have-experienced/