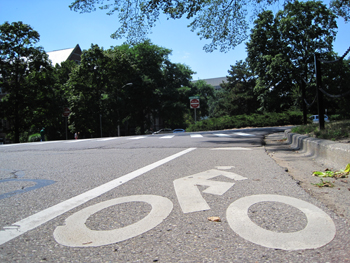 While bicycling soars in popularity, bicycle crashes are also increasing in Michigan.

Although bicycle crashes account for less than 1 percent of all traffic crashes, “bicyclists are more seriously injured in these crashes,” said Aneta Kiersnowski, the director of development and communications at the League of Michigan Bicyclists.

Many drivers are unaware that bicyclists — not only motorists — have the right to use the roads, said Kiersnowski.

“Often motorists will shout things like ‘get off the road’ or ‘get on the sidewalk’ at bicyclists when they are lawfully riding on a roadway,” she said. “Some even attempt to ‘punish’ bicyclists for being in their way by passing them extremely and dangerously close.”

The most severe crashes occur when a bicyclist is hit from behind when both the bicyclist and motorist are traveling in the same direction, according to the state crash data.

It would require driver education classes to include at least one hour of instruction on laws pertaining to bicycles, motorcycles, pedestrians and other “vulnerable roadway users.”

The House Committee on Transportation and Infrastructure has moved the bill to the House floor for a vote.

Alexander said some motorists are confused because communities have different types of bike pathways. Some are in the middle of the road, some are on the side and some are between the road and parking areas.

“We need to make sure our new drivers have the information and education to become a better and safer driver,” Alexander said.

The one-hour classroom instruction would come from the 1.5 hours of instructor discretion that is now in the curriculum. It wouldn’t affect the total hours of driver education and other content, she said.

If the bill is signed into law, local instructors would follow the outline established by the Department of State, she said.

The department is responsible for the driver education curriculum.

To ensure drivers’ awareness of bicycle safety, Relich suggested that the department write questions to test their knowledge.

Besides advocating for the improvement of driver education, the League of Michigan Bicyclists is creating a web-based training program for adult bicyclists, children and motorists on bicycle safety.

“Incorporating bicyclists into driver education training will help motorists build an understanding of bicylists’ behavior and lead to an environment where both are comfortable interacting with one another,” Kiersnowski said.