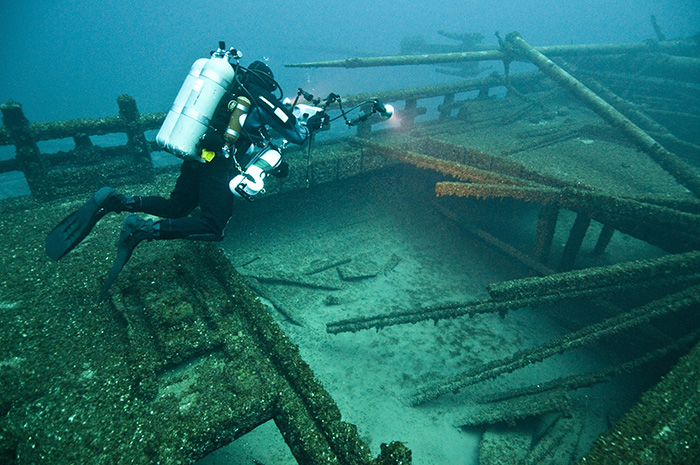 Silently resting beneath the surface of the Great Lakes, off the shores of many Michigan communities, are hundreds of shipwrecks, protected by the state and a dwindling crew of volunteers.

So protecting these sunken sanctuaries is left largely to volunteers with the nonprofit Michigan Underwater Preserves Council, which is based in St. Ignace and draws many of  its members from communities near the protected underwater areas.

“Our volunteer corps is not expanding. It’s declining and it’s going to continue to decline,” said Ron Bloomfield, past president of the council. He also spent eight years on the state’s Underwater Salvage and Preserve Committee, an advisory panel.

Volunteers place marker buoys at the sites of shipwrecks, research the sunken ships, promote the preserves and check on the vessels to “make sure people aren’t stealing stuff off the wrecks,” said Bloomfield, who lives in Kawkawlin Township.

The volunteers even raise the money to buy the marker buoys, he said.

“At one time there were approximately 50 to 60 volunteers spread throughout the preserve system,” he said. “I would venture a guess we now have less than 20 active volunteers mostly spread between three preserves, with a few in some of the other area.”

There are a variety of reasons for the shrinking pool of volunteers, Bloomfield said.

Many people move away or get out of diving, he said, and “fewer new divers seem interested in the Great Lakes..

“Couple that with increasing demands on people’s time, and it is one of those cliche ‘perfect storms.’”

Within the preserves are at least 500 shipwrecks, Bloomfield said, and “they’re finding new ones” all the time.

“We have some of the best preserved wooden shipwrecks in the world,” he said.

The preserves range from nearly 14 square miles at the Detour Passage Underwater Preserve in the eastern U.P. to 4,300 square miles in Thunder Bay, off the coast of Alpena, said Friedhoff, who lives in St. Ignace.

Thunder Bay is a national marine sanctuary as well as a Michigan underwater preserve, and is jointly managed by the federal and state governments.

The waters around Isle Royale National Park in Lake Superior also are under federal protection.

Friedhoff says the council’s “active volunteer base is shrinking, to an alarming point.”

“We have the same issues as most nonprofit organizations. Lots of people are in favor of what you do, but few have time or inclination to get involved,” he said.

After becoming a certified diver in 2001, Friedhoff learned that all Great Lakes wrecks are not the same.

“I quickly became aware of the vast difference between shipwrecks that were discovered and largely stripped before the preservation ethic caught hold, and those that were discovered later, after divers recognized the value in keeping these sites relatively intact,” he said.

And while there has been a significant reduction in the stripping of wrecks, he said, “there is still a lack of understanding that certain traditional diving activities are harmful to old wooden vessels.”

Volunteers have made strides in educating divers about not hooking directly onto wrecks and instead using moorings placed on wreck sites, he said.

“The preserve volunteers also help raise awareness of the damage done by simple acts, like forcing a way through a tight passage or attempting to move artifacts to get a better photo,” he said.

The Michigan Underwater Preserves Council and the individual preserves “work to spread the word that even the smallest artifact needs to be preserved,” he said.

“I think most divers are receptive to the preserve ethic promoted by the preserve system, and increasing peer pressure has gradually reduced the impact of looters.”

Thanks to promotion and protection efforts by the council, the state and local residents, Friedhoff said, “divers come to the Great Lakes from across the country and around the world to see the well-preserved freshwater shipwrecks.”

Volunteers also are important to the success of the Thunder Bay National Marine Sanctuary, said Stephanie Gandulla, who coordinates volunteer activities at the sanctuary.

She has the names of about 300 volunteers in her database and has been fortunate to not see a drop off in volunteering, she said. That may be due to the fact that many volunteer tasks at the Thunder Bay facility are less demanding than anchoring buoys, she said.

The Thunder Bay sanctuary and preserve is jointly managed by the National Oceanic and Atmospheric Administration and the state.

Sandra Clark, director of the state’s Michigan History Center in Lansing, heads  the state’s half of the management team at Thunder Bay.

That team includes a state underwater archeologist, whose responsibilities include preserving the rich maritime history at Thunder Bay, she said.

A shipwreck “is a frozen-in-moment kind of history,” Clark said. “That moment doesn’t get altered.”

Since the creation of the state  preserve at the Straits of Mackinac, area tourism has been up, said Janet Peterson, executive director of the St. Ignace Chamber of Commerce.

“Yes, it’s absolutely impacted our community,” Peterson said. “It’s just not as visible.They don’t walk around in their gear.”

But if you look, she said, there are plenty of signs in the summer of divers in the St. Ignace area. She said she’s learned to spot dive decals on vehicles, tourists wearing dive T-shirts and dive gear left to dry outside motel rooms.