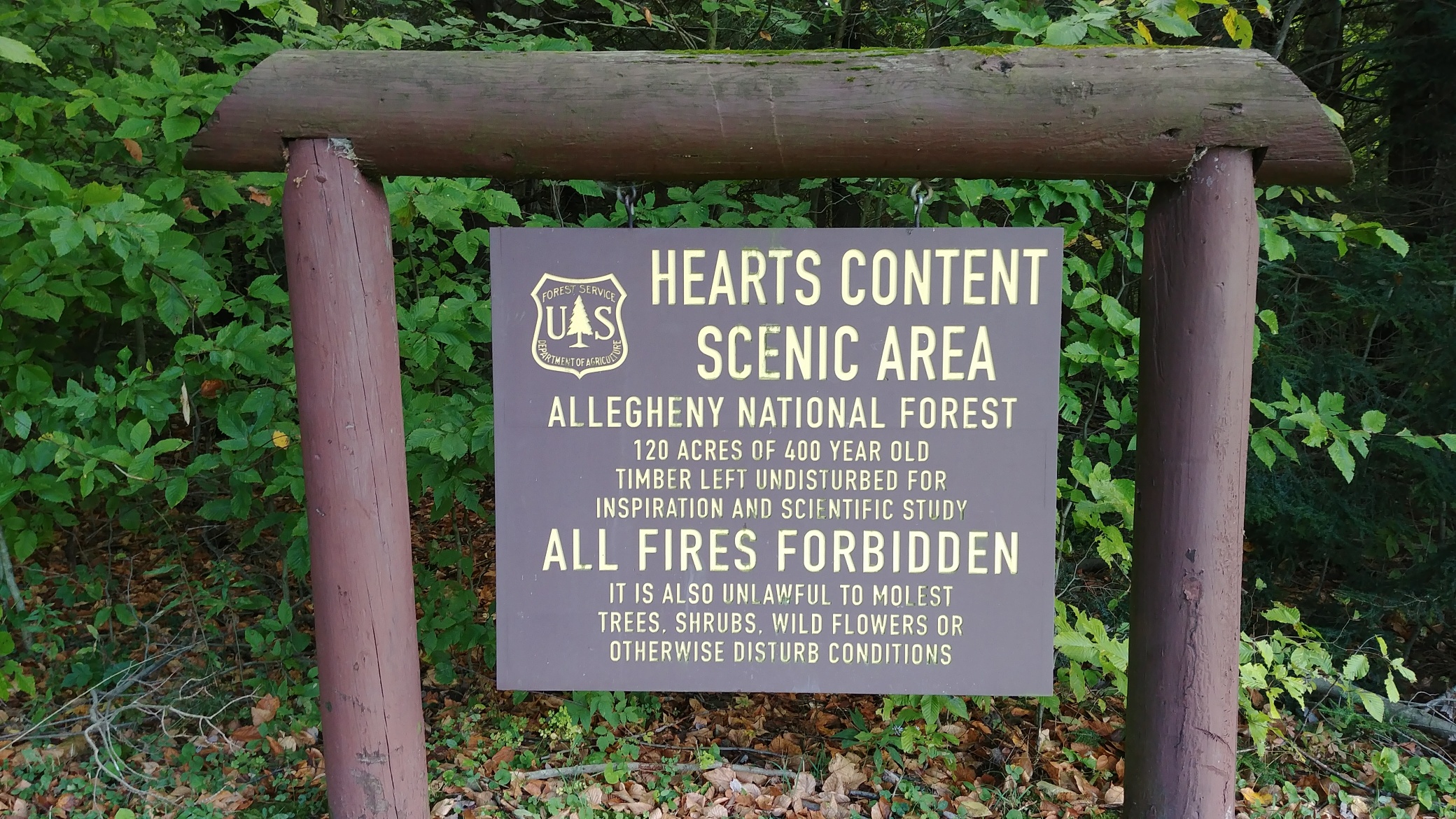 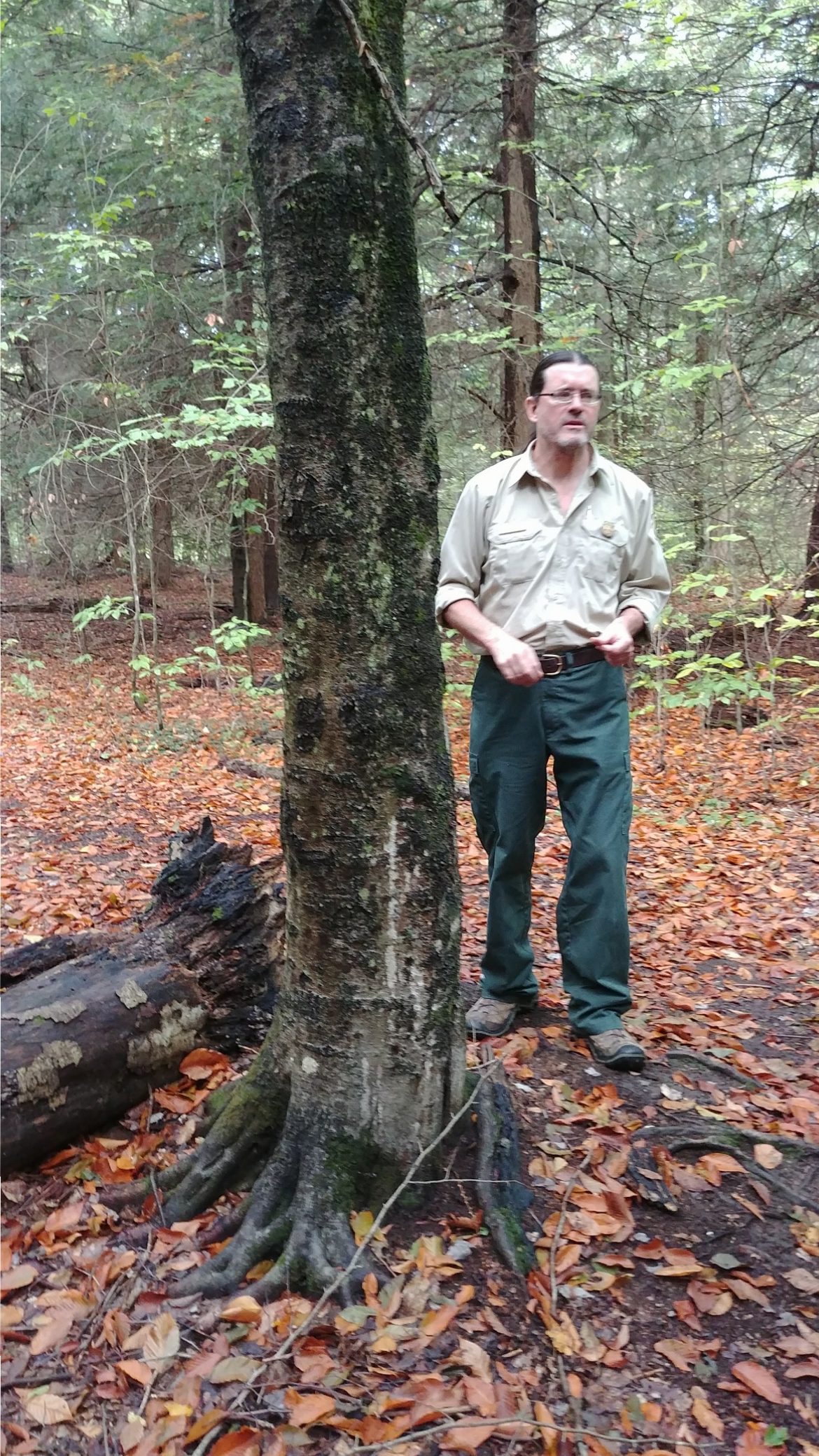 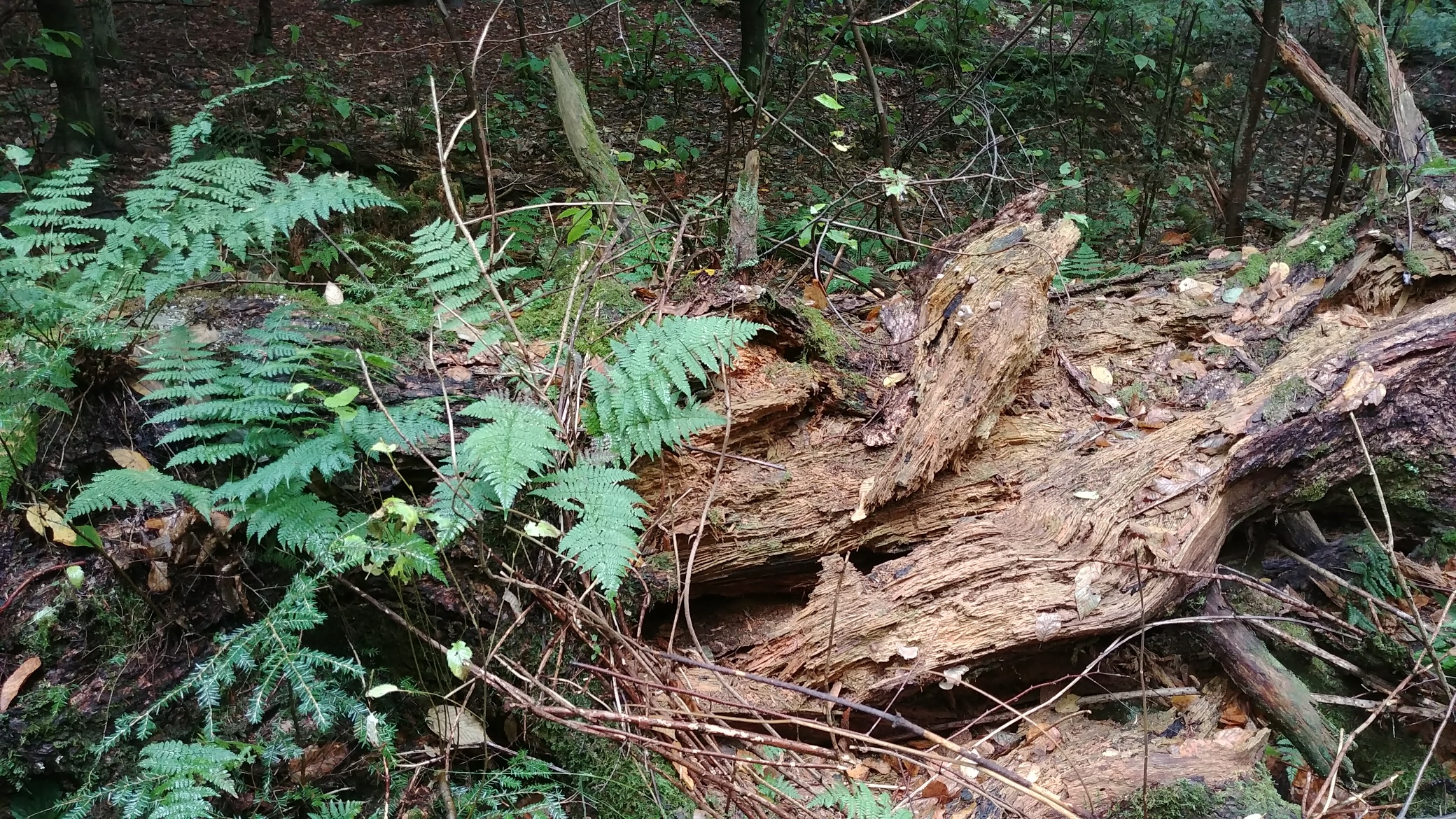 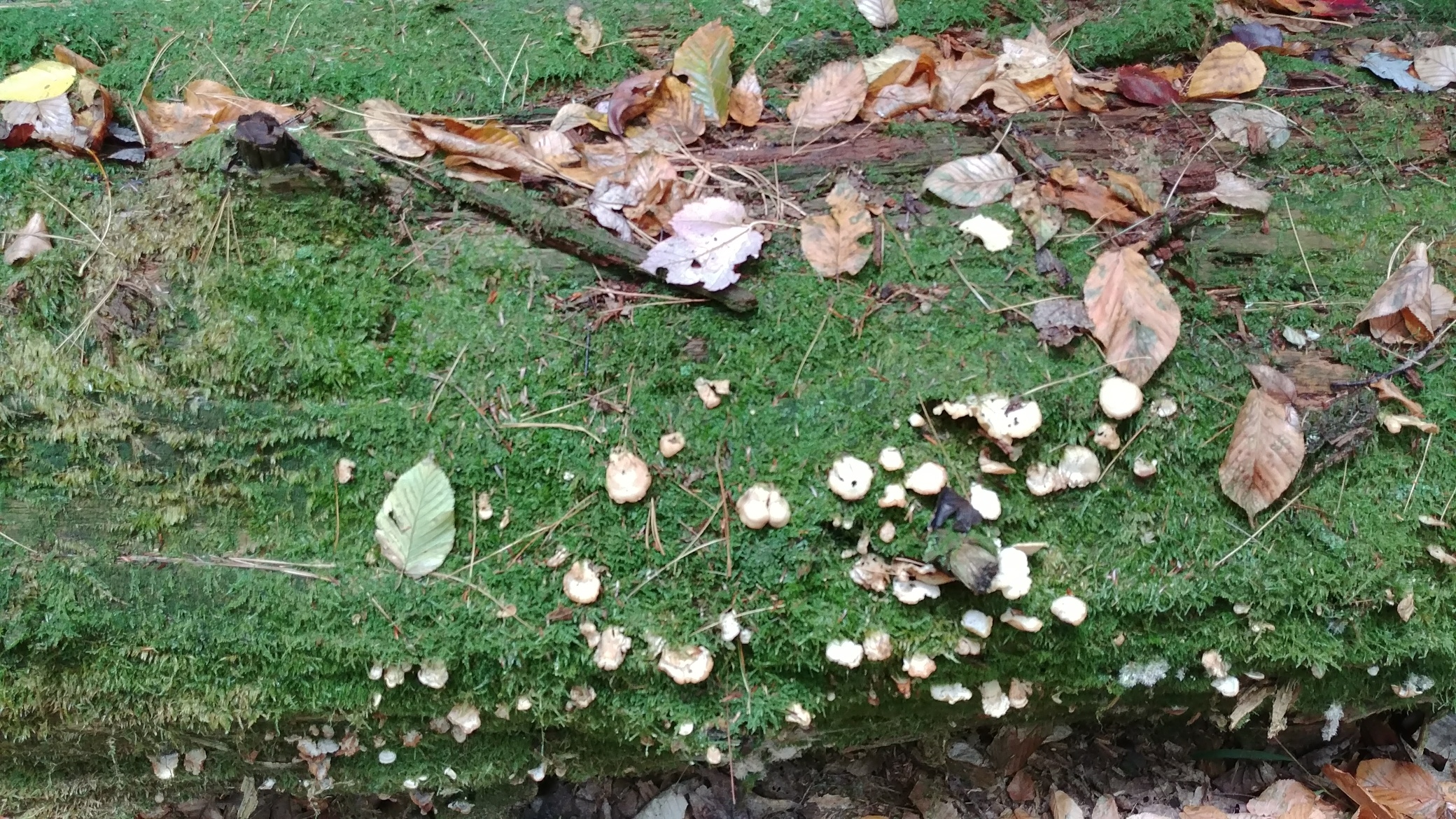 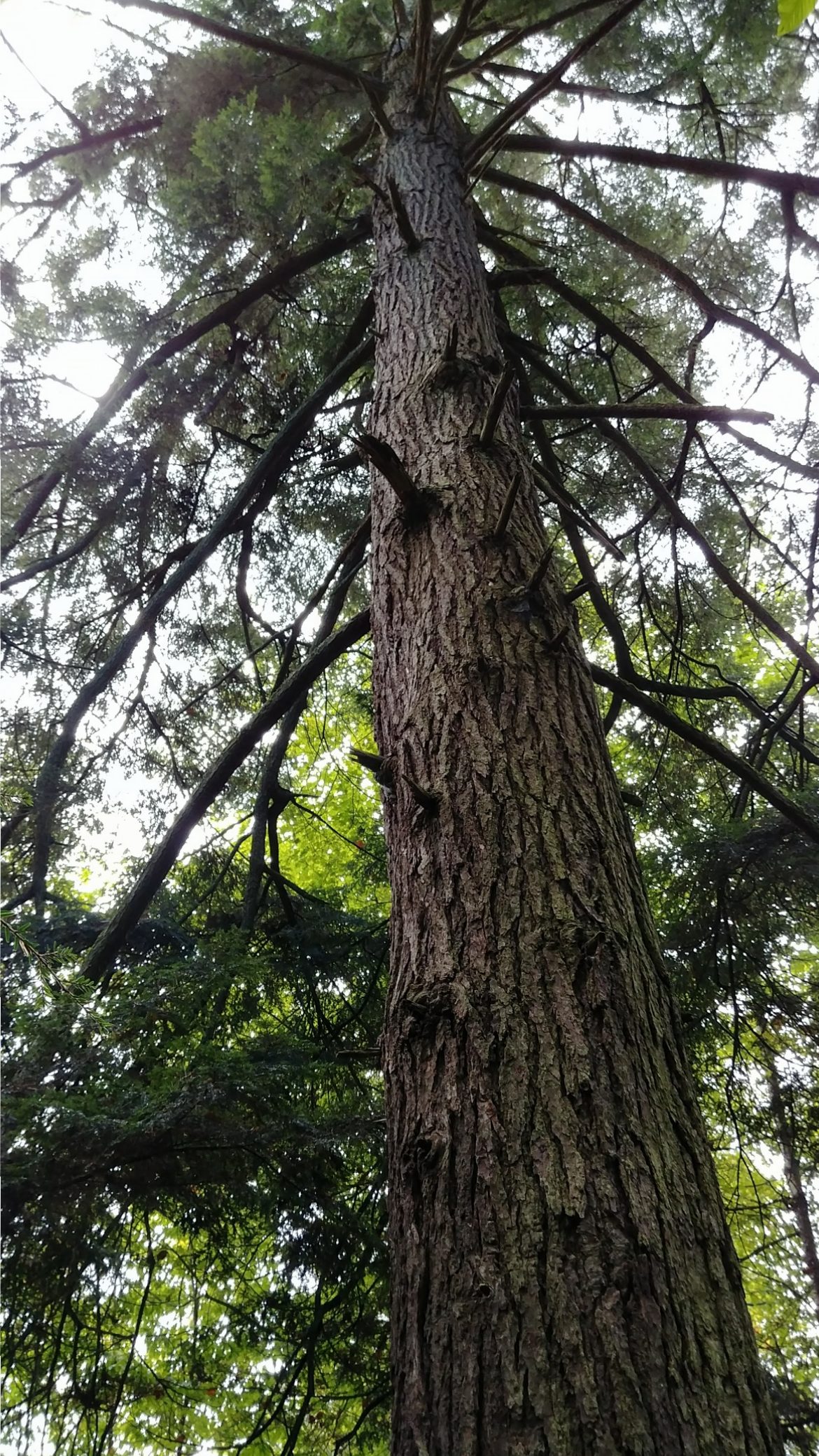 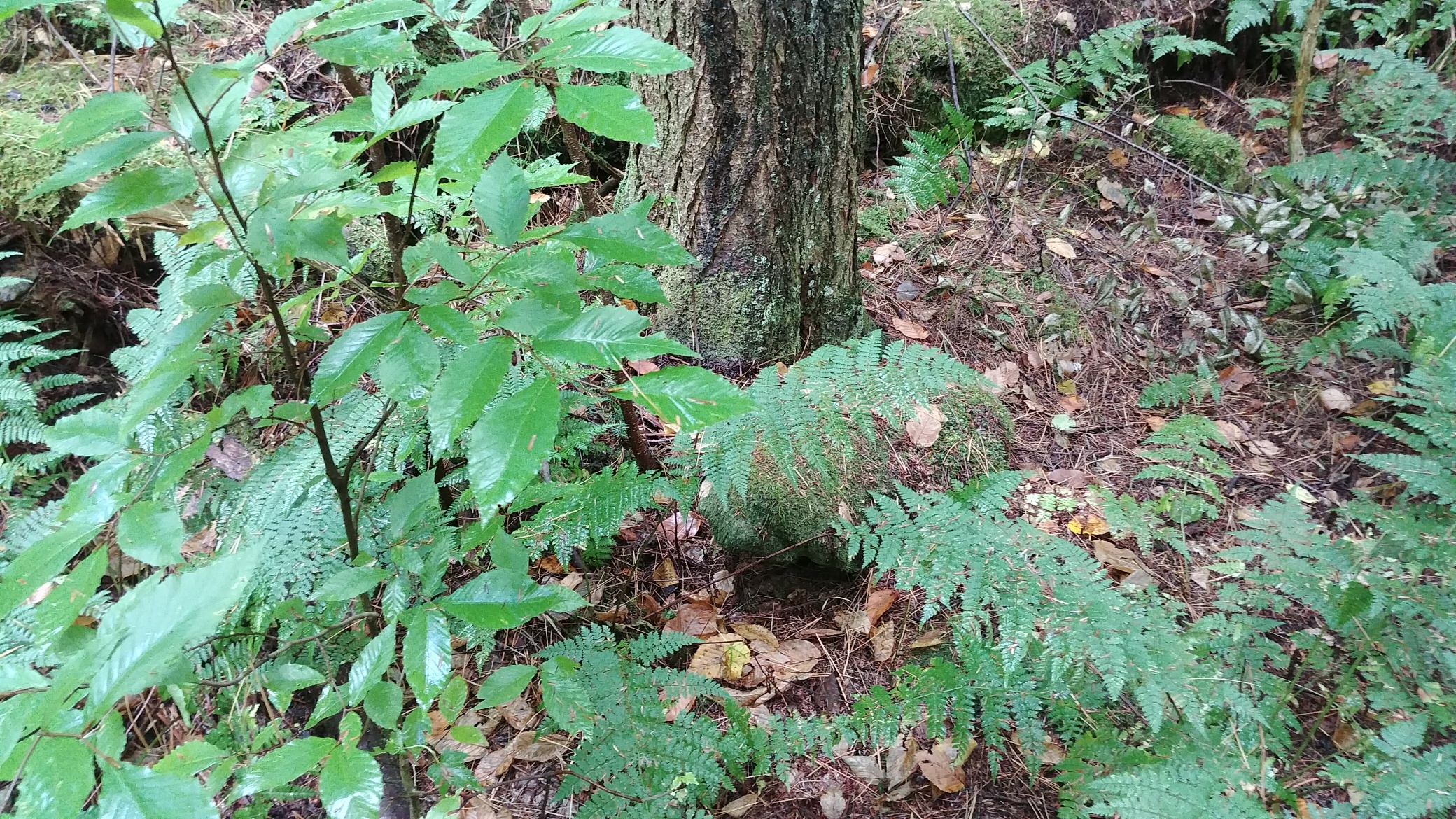 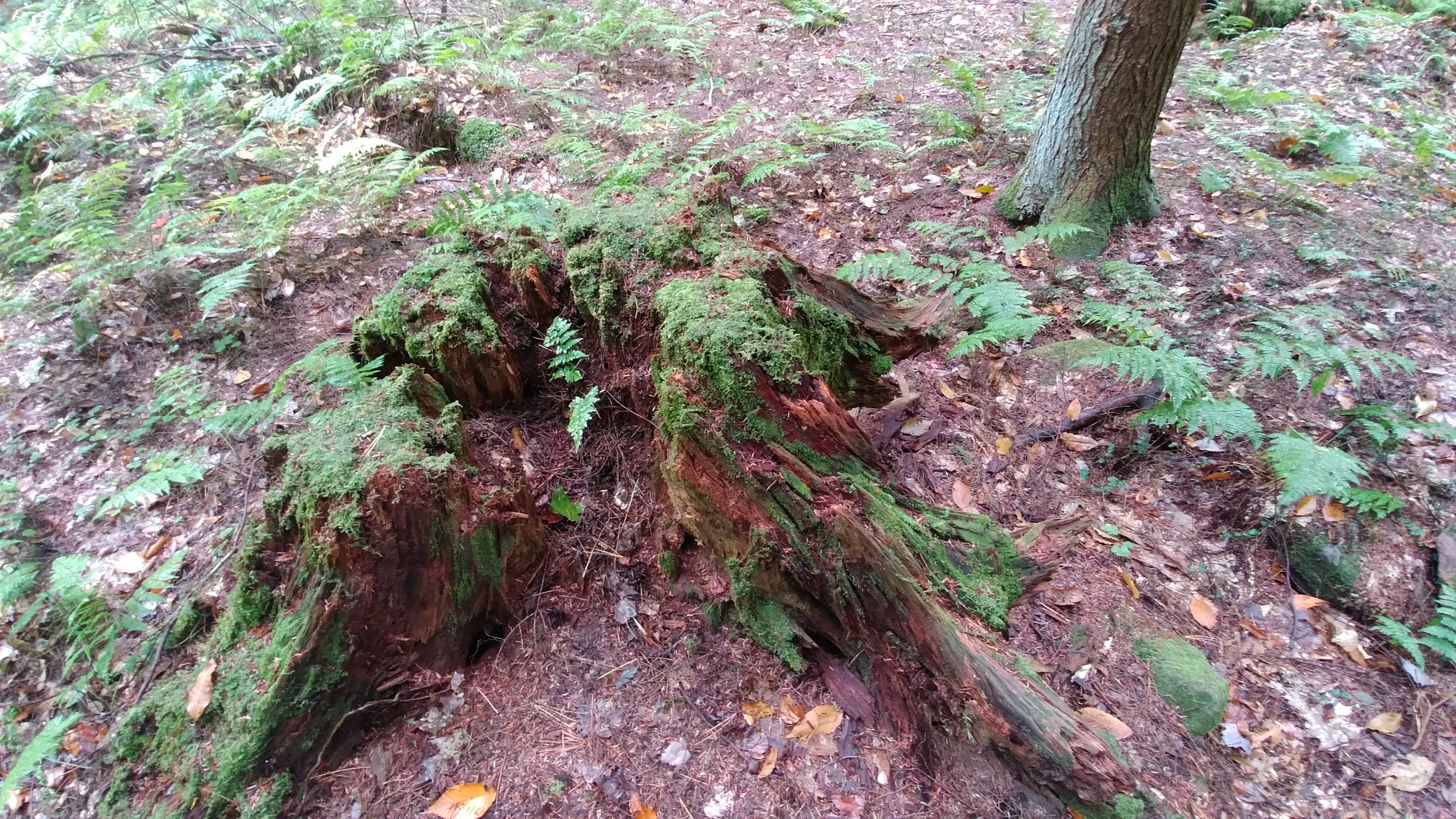 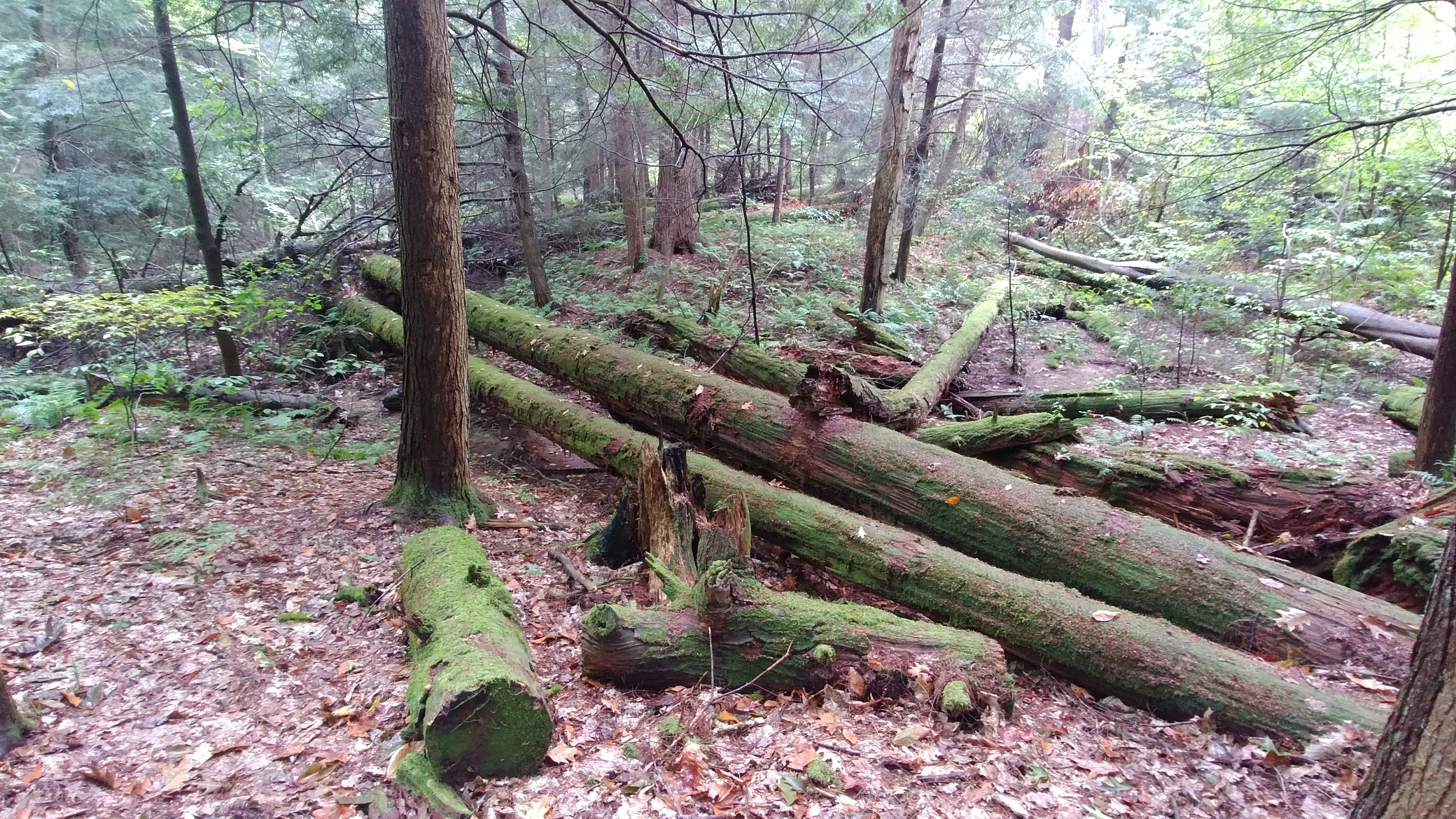 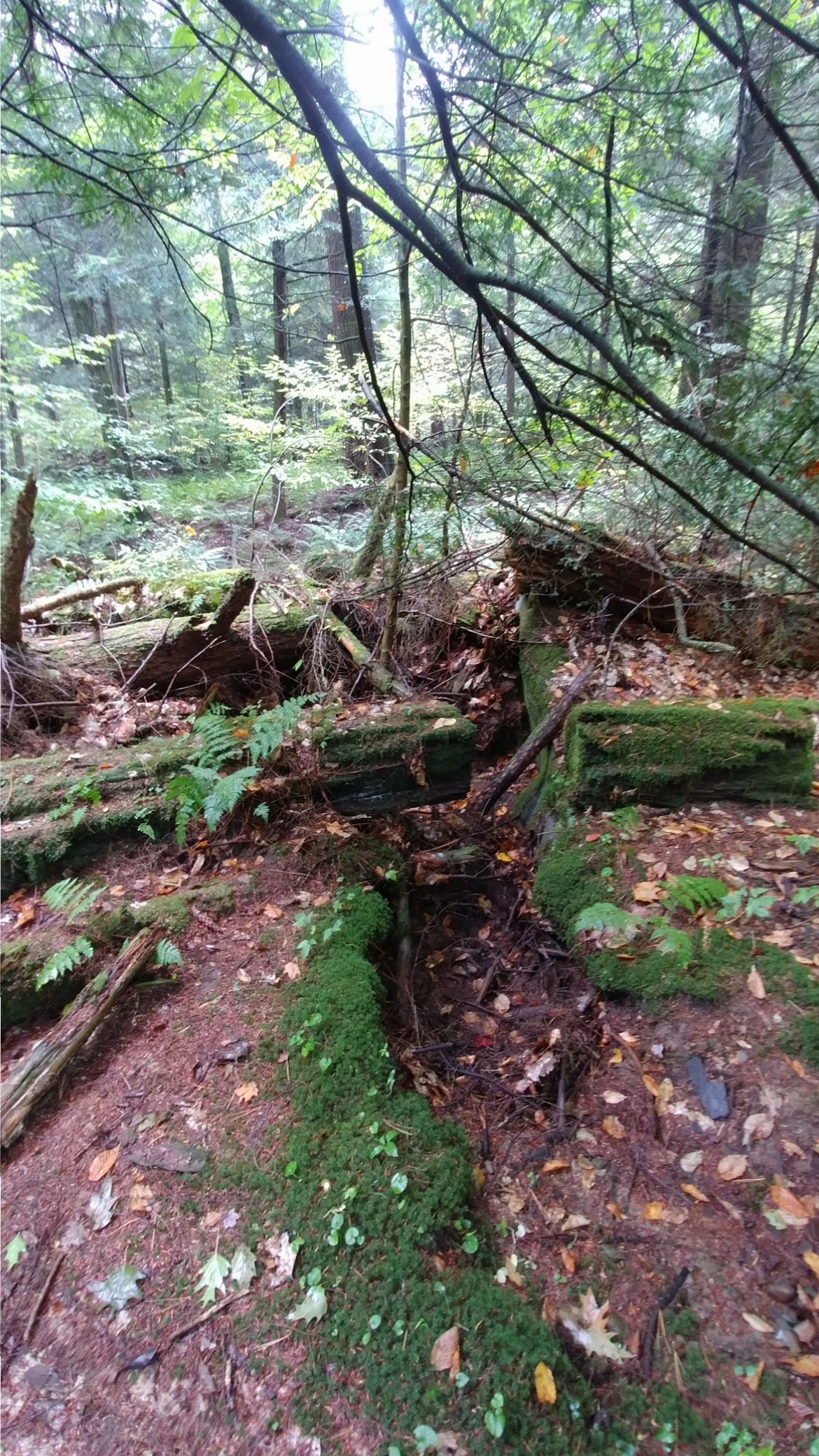 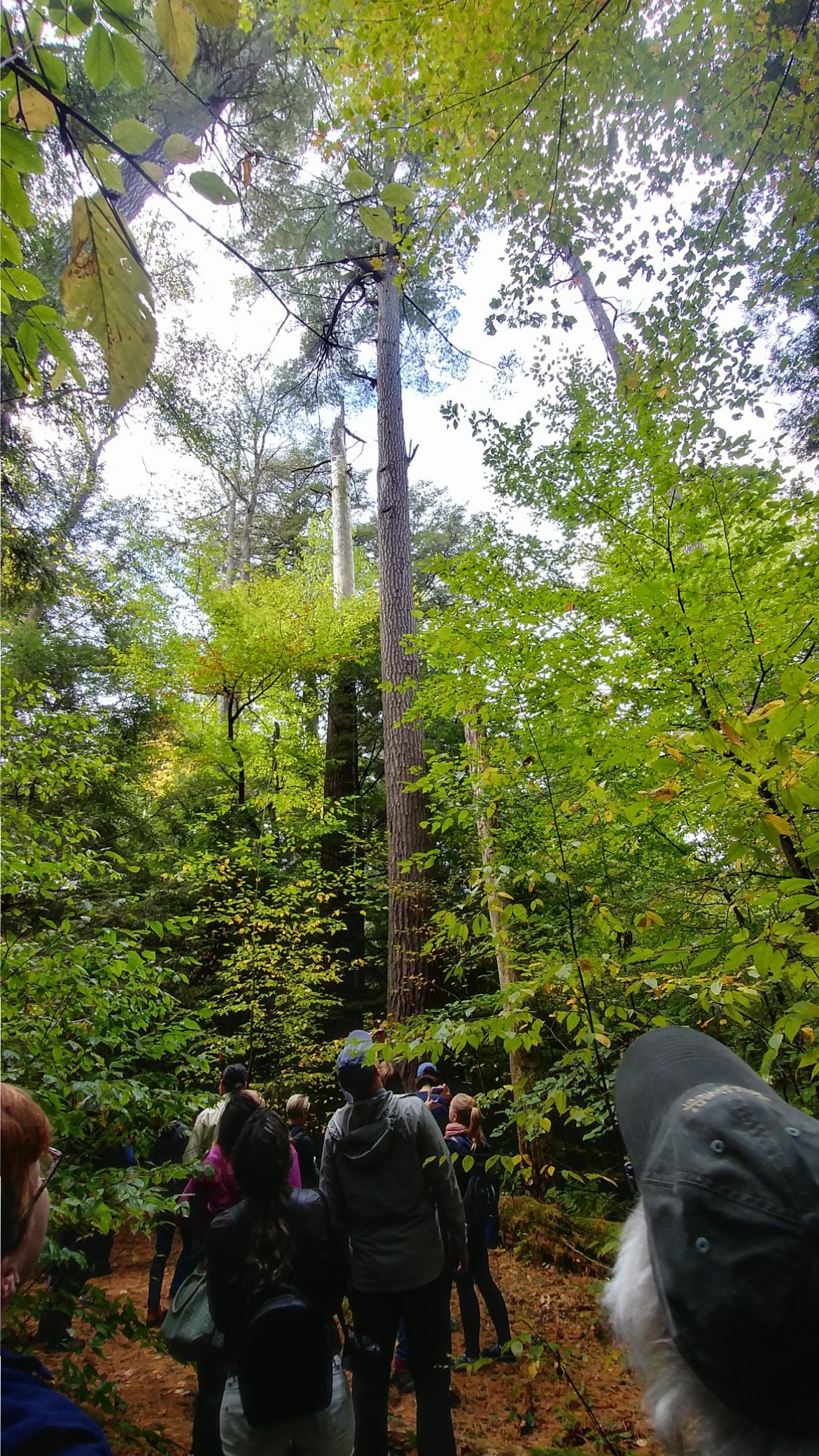 Environmental journalists look up to the giants. Image: Eric Freedman 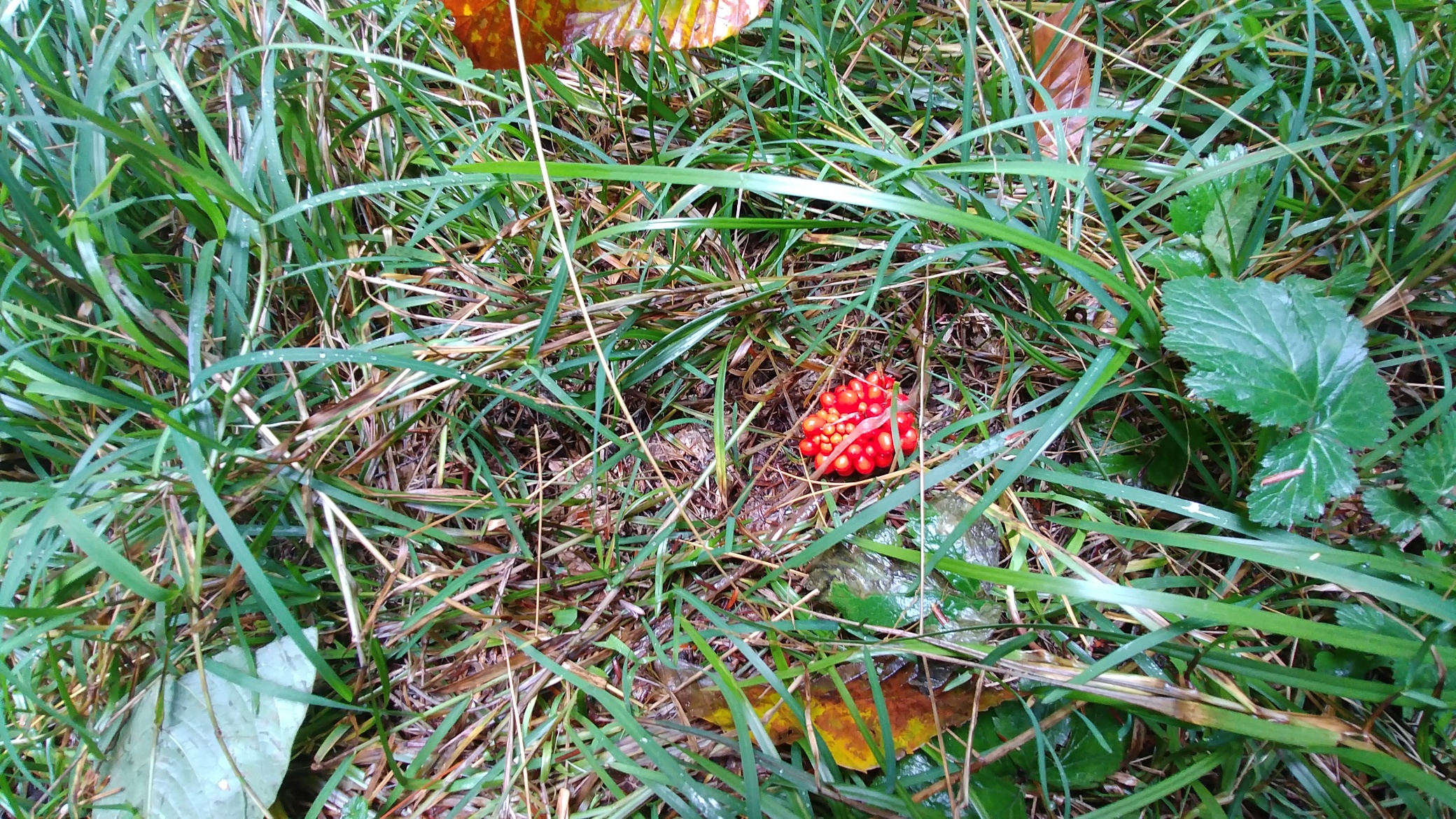 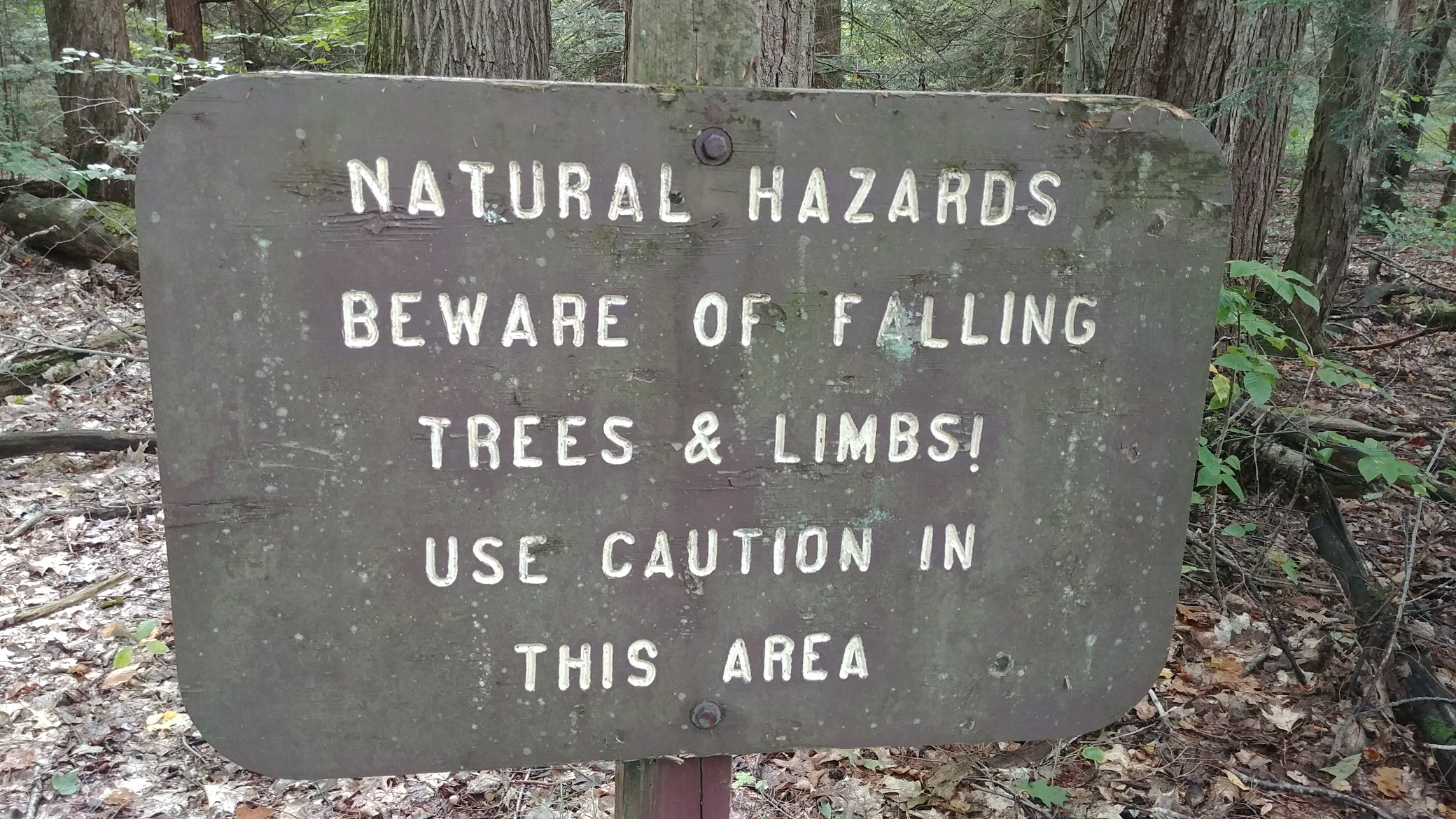 Hikers are warned to be careful. Image: Eric Freedman 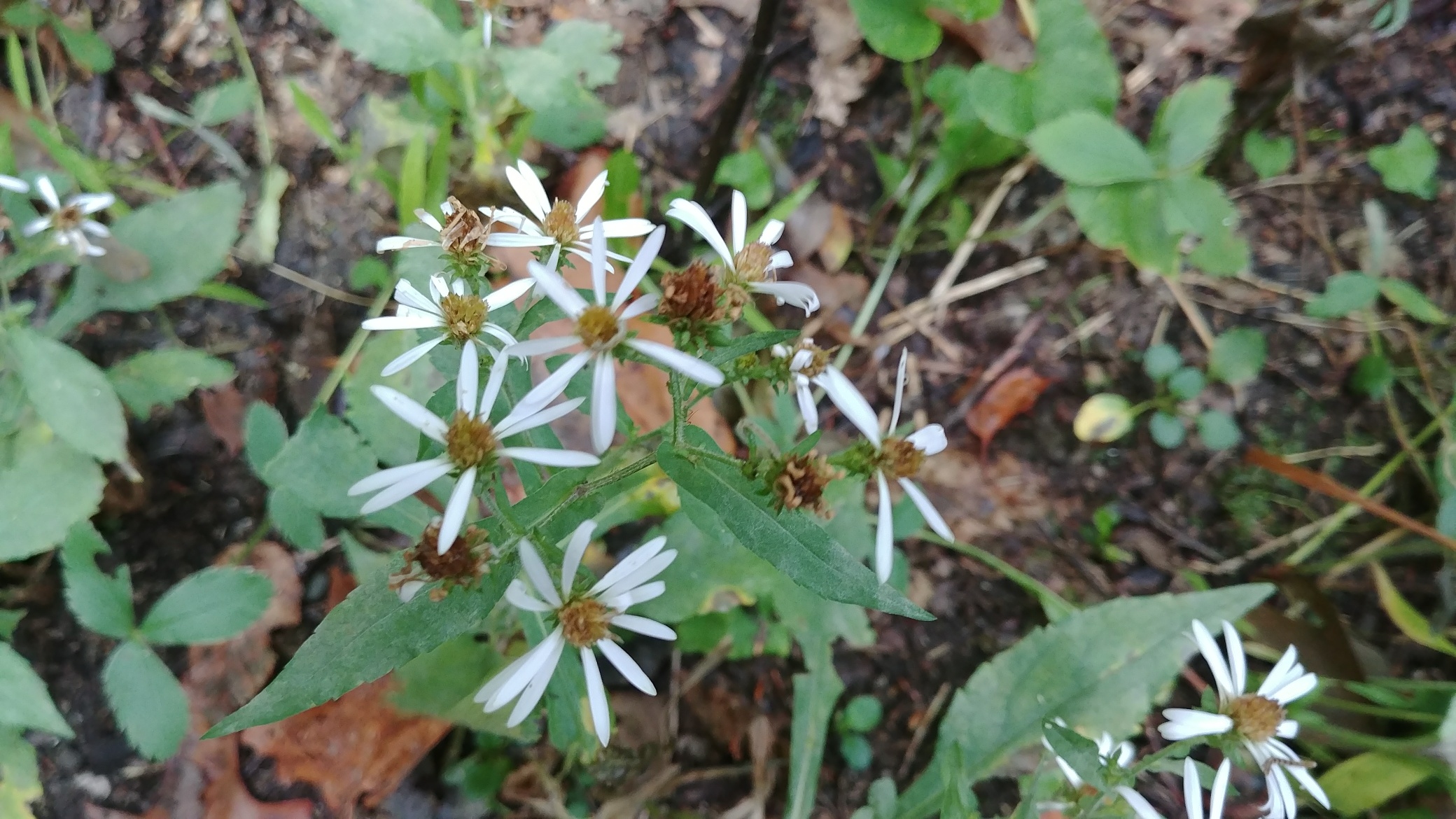 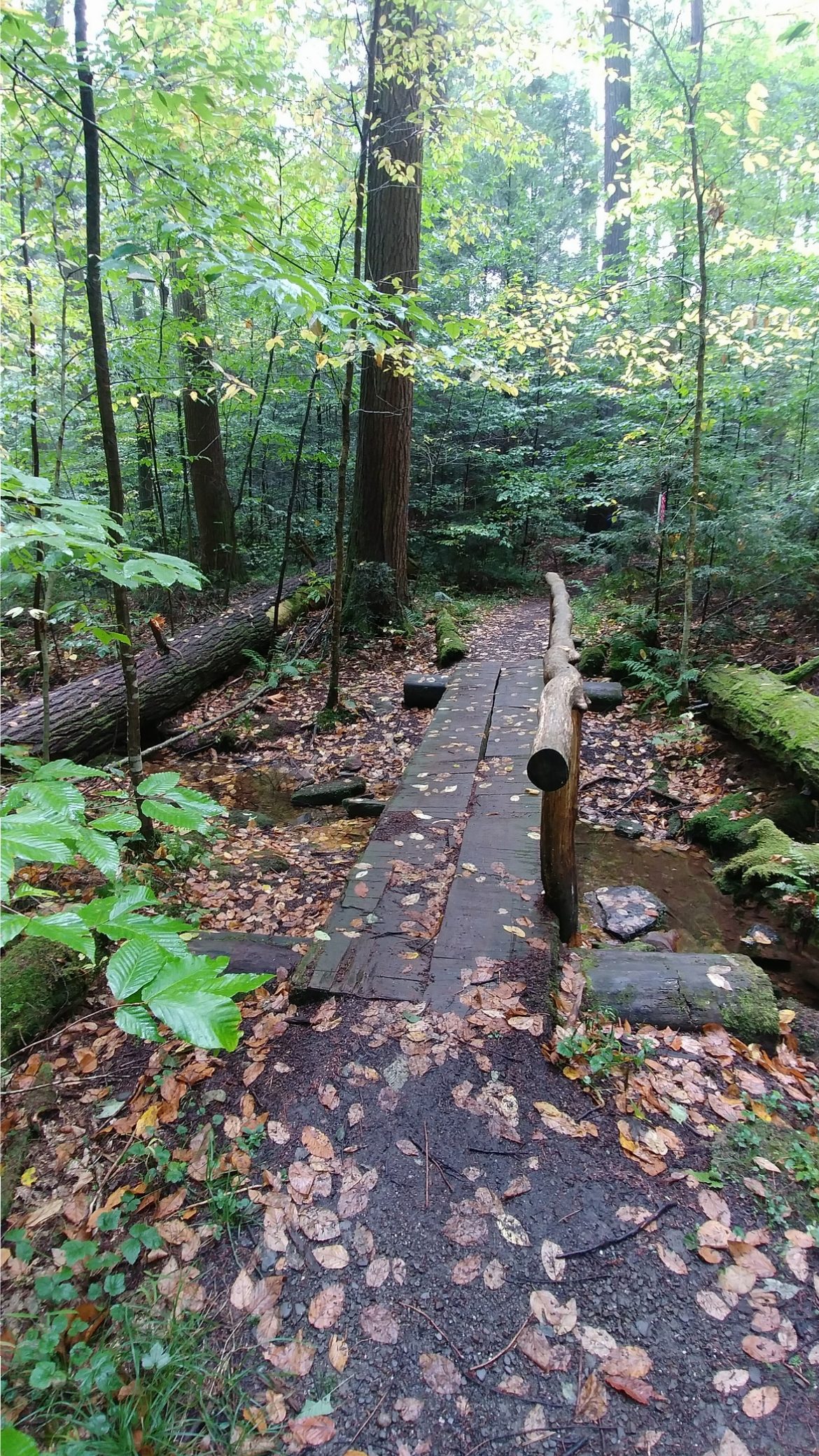 This is the forest primeval. The murmuring pines and the hemlocks,

Bearded with moss, and in garments green, indistinct in the twilight,

Stand like Druids of old, with voices sad and prophetic.

Stand like harpers hoar, with beards that rest on their bosoms.

–Henry Wadsworth Longfellow, from the introduction to “Evangeline”

These images are exactly the one Longfellow evoked in his epic narrative poem “Evangeline,” although set in Pennsylvania in 2017 rather than in Nova Scotia in the mid-1700s.

The setting is Hearts Content, a national scenic area with an old-growth remnant timber stand in the Allegheny National Forest

Here, moss covers fallen giants in various stages of decay. Fungi cling to rotted stumps. A bright orange newt scurries to shelter. A toad, camouflaged brown amid the fallen leaves across the trail, moves too slowly to avoid being picked up, then hops away when released.

We are in the old growth of Hearts Content dominated by towering beech, white pine, black cherry and hemlocks, while ferns dominate the forest floor.

This part of Hearts Content accounts for just a sliver of the half-million acres that make up the Allegheny National Forest in northwestern Pennsylvania, one of the country’s most heavily logged-over states.

“Majestic forests were this nation’s inheritance,” says the nonprofit Old-Growth Forest Network. Today, however, most of those forests are changed or gone–only 1 percent of our old-growth Eastern forests remain.

Here in Hearts Content, “whispering the secrets of the centuries stand 300 to 400-year-old white pine, hemlock and beech,” the U.S. Forest Service says.

Hiking along its mile-long interpretive trail brings to mind these words from the ending of Longfellow’s “Evangeline”: “Still stands the forest primeval.”

But for how long?

Although the old-growth trees in Hearts Content are legally protected from logging, dangers to their survival are visible: Hemlock threatened by the aphid-like hemlock woolly adelgid. Beech killed by beech bark disease.