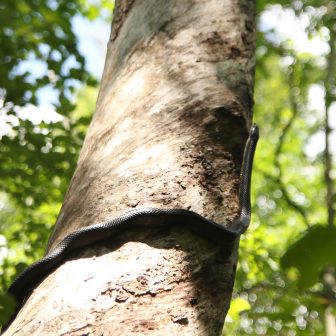 Experts say gray ratsnakes (Pantherophis spiloides) are close to extinction in Canada. The non-venomous snakes grow to seven-feet long. They are semi-arboreal, which means they spend much of their time in trees. That makes them even more difficult to find.

The research involves catching gray ratsnakes, implanting them with radio transmitters and then tracking them to collect information about their habitats.

So far, they’ve located three of the shiny, black snakes with a white underbelly. That includes two in late September, researchers said.

They didn’t expect to find any when the project started this spring, said Tanya Pufler, a conservation manager for Ontario Nature, the organization leading the research. 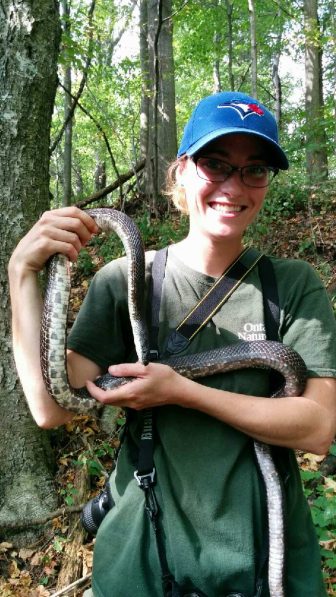 “It’s always talked about like being the Snuffleupagus from Sesame Street,” she said. “You hear about them, but nobody ever sees them.”

The gray ratsnakes live within two regions of Ontario — the Carolinian region, north of Lake Erie, and the Great Lakes-St. Lawrence region, which is further north and extends along the Great Lakes shoreline and St. Lawrence River. Gray ratsnakes are abundant in the Eastern U.S. They are listed as “of special concern” in Wisconsin and Michigan.

The Canadian study focuses on the Carolinian gray ratsnake, which is listed as endangered. It’s the largest project on gray ratsnakes in decades, researchers said.

“The lack of research is largely the result of this population being very small,” said Joe Crowley a herpetologist with the Ontario Ministry of Natural Resources and Forestry. “Individuals are rarely observed and reported by the public, so it is also difficult to learn much about the population from observational data alone.”

This summer’s effort to locate the large snakes in the small region of Ontario was a challenge for researchers and volunteers. They found the first snake in May and named her “Hope.” They became frustrated when no other snakes were found, said Amy Whitear, a conservation specialist on the research team.

“You start to kind of question whether it’s your survey methods,” she said. “Whether you are looking in the right spot, whether the habitat you’re looking in is the right habit or if the population is in such low density that you need to put in hundreds of hours of surveys in order to find a snake.”

They found two males in late September. Each was about five-feet long and weighed two pounds. One was in the forest. The other was sunning himself on the road, researchers said. 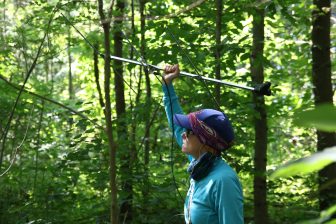 A researcher uses a handheld antenna to track a snake within the trees. Image: Sterling Sztricsko

The project involves implanting a transmitter into each snake and tracking them three times a week with a handheld antenna, Whitear said. Researchers can stay on the ground as the snakes slither through the canopy up to 50 feet above.

Gray ratsnakes are communal. That means the three snakes may lead researchers to more, said Steve Marks, a herpetologist who assists with the project. 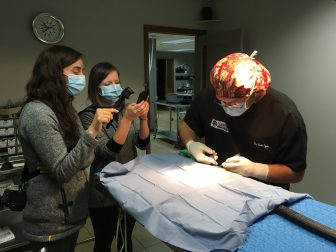 A transmitter is implanted into a gray ratsnake. Image: Steve Marks

“If we follow one individual to a spot, if we fence in that spot so that no snakes can leave … all of the snakes that are found in the hibernacula (hibernation area) will be caught up in the spring,” Marks said. “That will also give us a lot of animals to study.”

Marks said agriculture is the biggest threat to gray ratsnakes. Ontario’s two populations are confined to “tiny islands of habitat” that are separated by large areas of farmland, Marks said.

Marks said transplanting the species is technically possible, but the loss of habitat in Ontario means transplanted snakes wouldn’t thrive without addressing the ecosystem.

Marks says he hopes the research will lead to creating more habitat for the snakes. Similar efforts worked with bald eagles and other species that were once threatened or endangered.

“The time is of the essence,” he said. “It’s one of the satellite populations of reptiles that is so close to being extinguished that if we don’t do something quickly it will be extinguished.”

Gray ratsnakes are non-venomous and non-aggressive, yet humans are another threat. Marks said people unnecessarily fear ratsnakes because they don’t know a lot about them.

“They are completely harmless, and when I say completely harmless I mean completely and totally harmless,” Marks said. “You could put a ratsnake in a crib with a newborn baby. There’s nothing that the ratsnake can do to that child … even if they were to bite, which they wouldn’t, it wouldn’t hurt the kid. A mosquito bite would hurt more.” 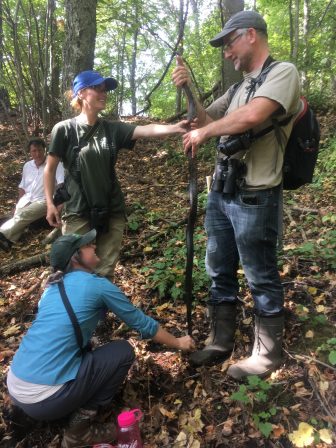 Researchers estimate the length of a gray ratsnake found on the forest floor. Image: Cathy Blott

The gray ratsnakes live mostly on private lands, but their endangered classification makes it illegal to kill them. Landowner support is needed to manage and protect the remaining population, Crowley said.

The research is funded through a stewardship program by the Ontario Ministry of Natural Resources and Forestry. It provides funds to projects that combine community and organizational efforts to address at-risk species.

Natural Resources Solutions Inc. is also a partner in the project.

Note: The gray ratsnake is referred to as the Eastern ratsnake, the black ratsnake and the species names Pantherophis spiloides and Elaphe spiloides.