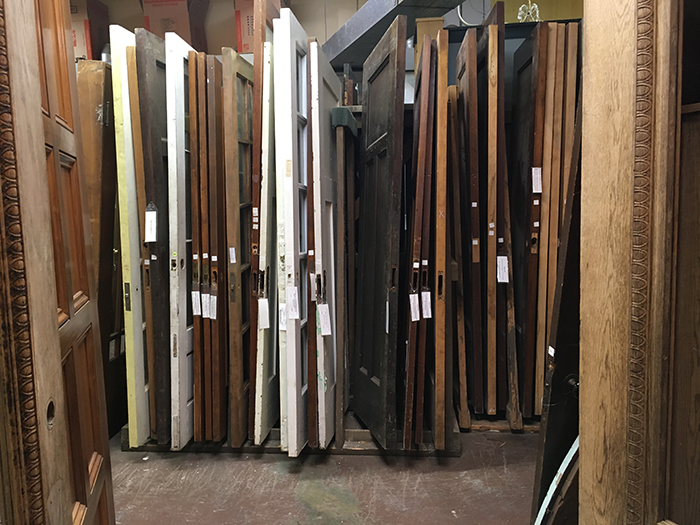 Editor’s note: This is the fifth in a series of stories about domicology, the study of policies, practices and consequences of structural abandonment.

The Great Lakes connect many blighted cities in a network that could supply recycled building materials.

That’s just one of the ways that domicology could spur the region’s economic development, according to a recent report by the Michigan State University Center for Community and Economic Development and the West Michigan Shoreline Regional Development Commission.

Domicology is a new term coined by some experts looking to repurpose materials from old buildings to avoid large scale waste and high landfill costs.

A city like Muskegon, with its deep water port, could serve as a hub for reprocessing materials, putting people to work and transporting the materials, Berghorn said.

Whether such a system could be developed is as yet unknown. But there are other economic benefits in carefully salvaging abandoned buildings, Berghorn said.

They include creating jobs in a growing recycling industry, providing low-cost building supplies through repurposing materials and creating technologies that make it easier to take buildings apart.

“What we’re suggesting is that if we create this new sector in recycling, that adds more jobs,” Berghorn said. “We’re shifting the jobs out of the disposal sector into the repurposing sector.”

Some of the workers needed include manual material sorters and removers and marketing specialists who watch the market and determine which materials are in demand.

“When you move into a mixed recyclables facility, you create new jobs,” Berghorn said.  “You’re taking what were landfill jobs and moving them in a different direction.”

Domicology aims to get policies in place that would help prevent large scale abandonment before it starts, Berghorn said.

Berghorn said the cost advantage of using and reusing materials is more efficient than throwing the materials, and essentially money, away.

Constructing buildings without compromising the recyclability of the materials only adds about one additional day to a construction project, Berghorn said. If buildings are constructed inefficiently, they are much harder to deconstruct later and the materials may be unable to be reused.

One example is drywall. The system for putting up drywall moved to gluing the slabs directly onto studs that were screwed into the wall. When trying to deconstruct this, the drywall would break and the studs would be ruined because of the glue, Berghorn said. A better system has been created where workers use clips to hang drywall. When deconstructing, workers can manually break the drywall at every clip. Both the drywall sheets and clips are reusable.

“The economy of scale is always going to work best when you’ve got a large concentration of deconstruction,” Berghorn said.

That makes old industrial cities of the Great Lakes region a good source of material.

“Detroit has a huge problem with blight,” said Jeremy Haines, the executive director at Reclaim Detroit, which is a non-profit that reclaims valuable resources from landfills through deconstruction and reuse practices. “Detroit has probably more than 10 times the amount of buildings that need to be taken down than any other city in the country.”

Haines is trying to get at least 3,000 feet of wood from 7 percent of the abandoned houses in Detroit. This equates to $500 million in economic value – starting with the value of the wood, manufacturing it, paying the wholesale prices and then the price the end user pays, he said.

This aids the economy because the price of a material goes up as it circulates from the laborer who removed it from a building to the end retailer, Haines said.

“It would be wonderful for any city to look into adopting reuse and recycling strategies when they issue demolition permits,” Haines said.

But that takes a lot of time and relationship-building between people and politicians, Haines said. Aligning goals with the city and community is the best path to deconstruction and policy changes. This is important because political landscape is a huge factor in what can be done with deconstruction and on what scale.

It’s still unclear what the full scale of economic impact is yet, Berghorn said.

But domicology advocates say any progress is important.

“It’s all about finding a solution that is going to move things forward in the right direction,” Haines said. “You can’t shoot for a 100 percent solution rate right out of the gate. You have to prove success.”

Education and awareness are necessary to institute change, Haines said.

“It’s a really key step in the process that can accelerate impact for any place. If you can institutionalize reuse policies into the fabric of law, that’s a big win.”