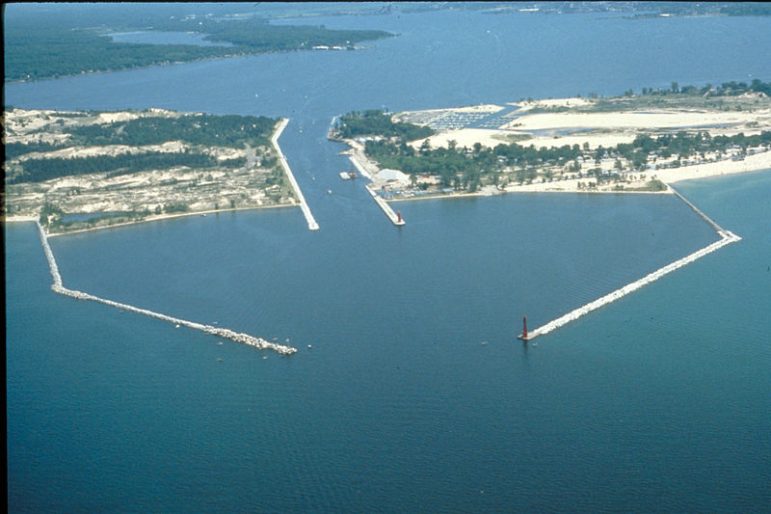 Port of Muskegon from the air. Image: Wikimedia Commons.

This is the fourth in a series of stories about domicology, the study of policies, practices and consequences of structural abandonment.

Muskegon once was called the “Lumber Queen of the World.”  It has been called “the Port City” and the “Riviera of the Midwest.”

Now, city officials hope to add “Deconstruction Hub of the Great Lakes” to the city’s titles.

In the mid-1880s, the peak of the lumbering era, Muskegon was a bustling hub for processing logs into timber shipped across the Great Lakes region.  Chicago was rebuilt after the fire of 1871 with timber from Muskegon.

Advocates of the city’s port would like to see some of that timber come back. That could happen if Muskegon became a hub for deconstructing some of those same cities it helped build.

Deconstruction is taking apart abandoned buildings and salvaging usable parts–as opposed to simply demolishing them. It is part of the larger study of domicology, which looks at the political, technological, sociological and economical aspects of structural abandonment.

And Muskegon has motivation to lead the way.

The city lost 8,500 tons of coal a year that once moved through its port after the B.C. Cobb coal-fired power plant was shut down in 2016, said Erin Kuhn, the executive director of the West Michigan Shoreline Regional Development Commission.

Losing the coal shipments through the port threatened to dip tonnage below the minimum required for the Army Corps of Engineers to dredge the channel, said Rex LaMore, the director of Michigan State University’s Center for Community and Economic Development.

The community was worried about losing the port and needed something else to ship through it, Kuhn said.

It was a perfect petri dish–the city has identified abandoned structures, money was coming into the community for demolition, Muskegon County has a strong sustainability focus and the port needed business, Kuhn said.

The researchers evaluated the efficiency of shipping to 10 ports in the Midwest and found that the most appropriate method of shipping deconstruction material is by containers–the large metal boxes that hold cargo on both ships and trucks.

Shipping in containers is safest because materials from abandoned buildings may contain lead, asbestos and other harmful substances, the report said. Ideally, the material could be loaded onto dedicated containers then trucked to the port, where it could be loaded and shipped around the Great Lakes.

There is no container shipping industry established in the Great Lakes, LaMore said. And the infrastructure to build containers is expensive.

“The potential to succeed is there, but the efficiency is not,” LaMore said. The material salvagers would be moving through the port by ship is high volume, but low quality.

These are materials such as the wood frames of houses, cement bricks and shingles–things that as of right now are heading to landfills, LaMore said.

Muskegon could still make its way as a deconstruction hub by trucking the material, which was shown to be more economically efficient than shipping by boat for every city except Milwaukee. Then eventually the port could build the infrastructure needed to ship the deconstruction material, LaMore said.

And Muskegon may be able to do that, thanks to a recent lowering of the port tonnage threshold for dredging and the road aggregate and salt now making up for the lost coal tonnage, Kuhn said.

The community is keeping its options open in terms of trucking versus shipping, Kuhn said.

“Just because the threshold has been lessened, the existing port operators and the community are still looking at diversifying,” she said.

However, no action has been taken yet toward Muskegon becoming a deconstruction hub, Kuhn said.

Right now, deconstruction in Muskegon is purely private. The county has been unable to work out a way to do deconstruction without opening up the floodgates to people illegally scavenging from the buildings, said Tim Burgess, the land bank coordinator for the Muskegon County Land Bank Authority.

“The researchers are still getting the findings of the study out there so the community and county can identify the next steps,” Kuhn said.

All of Michigan’s old growth forest is in its old homes–so if we value that wood we need to find ways to collect and reuse it, LaMore said.

To make Muskegon a viable deconstruction hub, the price or method of conveying the material must be changed, said Burgess. At the moment there is not enough  high- volume, low-cost deconstruction products moving through the supply chain to create a steady market, according to the study.

Perhaps through moving this deconstruction material, Muskegon can reprise its role as “Lumber Queen of the World.”

Tomorrow: Learn about how domicology can spur economic development in the Great Lakes region.

3 thoughts on “Once a hub for building cities, Muskegon could become one for taking them apart”