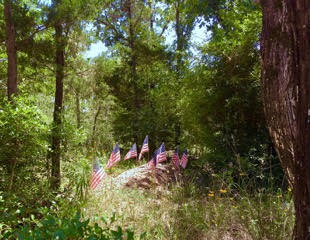 By Barbara Lucas and David Fair

This story originally appeared on WEMU’s The Green Room and is republished here with permission.

Because natural burial has environmental benefits over conventional burial, it is often favored by those who like to “go green.”  But it also can appeal for other, more conservative reasons.  It’s the choice of some independently-minded rural folks, and to many religious traditionalists.  Additionally, it can help out the local businesses that serve the growing demand.  In this installment episode of WEMU’s “The Green Room,” Barbara Lucas looks at natural burial benefits that go “beyond green.”

David Fair (DF):  There are many ways to reduce the carbon footprint at the end of life:  One could forgo a fancy casket, or go without a concrete vault, or say “no” to perpetual mowing over the grave.  Indeed, these “green” options are in demand in the environmentally-minded Ann Arbor-Ypsilanti area. But, is there anything about a natural burial that appeals to traditional, conservative principles as well?  In this installment of WEMU’s “The Green Room,” Barbara Lucas explores this question here in Washtenaw County, and beyond.

Ellen MacDonald:  This is a really beautiful meadow, we have all the bluebonnets growing here.

BL:  We’re ten miles from Austin, Texas.  Despite the freeway noise, it feels like the middle of nowhere.  It takes a close look to notice engraved stones, marking the hundreds of final resting places that lie within these ten wooded acres.

MacDonald:  I just think that looks really beautiful.  And her dogs Mattie, Maggie, Maizie and Minnie are buried next to her.

MacDonald:  The Jews have always had green burials. Actually all of us always had them 150 years ago. Muslims and Jews don’t want to be embalmed and they want to quick return to the earth and it’s supposed to be very, very simple.

MacDonald:  In Israel this is how they bury people.  They don’t use a casket, they wrap you in your tallit–your prayer shawl–and put you directly into the earth.

BL:  So for some Jews and Muslims, natural burial is essentially a right to religious freedom.  But this is Texas ranch country.  In fact, the week before, Eloise Woods had a visit from the neighbor’s cows.

MacDonald:  Some lady down the street, a head of her cattle got through the fence and just wandered down the street.  Now I know what a cow patty looks like.

BL:  Many customers drive out from the city.  But MacDonald says there’s also interest from rural residents.

MacDonald:  From what I’ve learned from a lot of people that come by here, this is exactly what they want. A lot of these old rural farmer people, it’s like, “I want to dig the hole, and put myself in!”  They want to dig the hole themselves, and they don’t want to mess with any of this complication, and they want funeral homes involved unless they have to.  Even if they use a funeral home they still want to do as much of it as they can themselves.

BL:  A spirit of independence can be found in rural Michigan, as well.

Bob Kellum:  It’s a third of an acre.

BL:  I’m with the Kellum family, in their rolling, grassy field, looking towards a wooded hilltop.

Kellum:  You can see it, it’s right up ahead there.

BL:  When his mother died, Bob Kellum built her a coffin.  Her children and grandchildren carried her from her house, through these fields, to their newly created family cemetery.

Kellum:  I have a new plan to use those big tall trees there.  Those are Aspen there. They would deteriorate quickly in the ground.

BL:  Who would that casket be for?

Kellum: Whoever is next in line! Hopefully not me!

BL:  The Kellums aren’t the first owners of this property to care for their dead themselves.  Their farmhouse was built before the Civil War–before the embalming, elaborate coffins, and concrete vaults that are now standard fare in the U.S.  Although the Kellum’s home burial may at first sound new and different, they actually followed time-honored traditions.

Mary Goode: This is the funeral door.

Woody Kellum: They thought it was bad luck to take somebody in and out of the door that you normally used.

Goode: This is the door we brought my father’s body through and back out again.

BL:  Being hands-on and connected to the cycle of life–as humans have been until very recent times–is important to Mary Goode and Woody Kellum.

BL:  That’s their grandson Alexander, at his birth.  He was born in this house, in the same room where a few years earlier, his great-grandfather’s body lay during a three-day home vigil.  Dry ice kept the body cold.  No embalming chemicals used.

Kellum:  So, it’s all about bringing these functions that used to be part of normal life back to people’s lives.

BL:  Certainly, everyone’s different.  Not everyone wants to exercise their right to a home birth, a home funeral, or a family cemetery.  But the Kellums aren’t alone.  For instance, they know of two other local families that have created family cemeteries.  Turns out, government is fairly hands-off, if you’re outside of city or village limits, and don’t sell any of the grave plots.

Kellum: The state has very few rules.  The only one I can think of is it has to be for family.   Not necessarily blood, but somehow connected by family.

BL:  I check in with Washtenaw County.  I learn that if land perks and is away from water bodies and wells, it can potentially be approved for a cemetery.  Contrary to popular belief, no caskets or vaults are required by public health or any other law.  Why then do cemeteries usually require them? Sounds of lawn mower and machinery.  Because heavy machinery can drive over them, and no settling occurs.  So that makes landscaping easier.

BL:  But as for ‘exercising one’s right’ to a more natural burial…

Mike Mitchell:  So what we are going to do now…

BL:  The skills are no longer commonplace.

Mitchell:  We’re going to do this a couple of times so that everyone can get a feel for it.

BL:  We’re standing around a hand-dug “pretend” grave at a Green Burial conference put on by the Ann Arbor Green Burial Network.

Mitchell:  Feet down first. Okay, you guys got the green strap?

BL:  This is where the Kellum’s learned the art of gently lowering a body down with cloth straps, from funeral director Mike Mitchell.

Mitchell:  We’re letting go of the sheet. Nice and easy.

BL:  Many from the cemetery and funeral industry are in attendance.   Our volunteer “body” is Dan Wagner, of Marble Park Cemetery in Milan.  Marble Park allows a choice–burials with or without vaults.

BL:  Mike Mitchell’s family owns funeral homes in Chelsea and Stockbridge.  They’re getting more and more requests for time-honored traditions.  Like the ancient method of shroud burial–without a vault, or a casket.  And Mitchell is happy to accommodate.

Mitchell:  I’m a facilitator.  There is no ‘normal’ way to do a cremation, a burial, a funeral. It’s what works for you as a family, it is my job to facilitate that.

BL:  Mitchell seeks out cemeteries that will provide the options his clients are wanting.  But he says currently, none of the cemeteries in Ann Arbor will allow burials without a vault.  He thinks accommodating wishes is smart business.

Mitchell:  My industry fought, rebutted, said horrible things about cremation, and now Michigan has a 60% cremation rate. It’s dumb not to, let alone being good for the environment.

Conference attendee:  Financially speaking, for funeral directors, there is an opportunity to gain revenue back that they lost to cremation.

BL:  More and more people are choosing Green Burials, despite the fact they aren’t necessarily cheaper.  So there’s a living to be made by providers of these services.  And a healthy business environment is another right-of-center ideal.

BL:  Some businesses are responding to the growing demand.  Mitchell says in addition to Marble Park Cemetery, two more cemeteries in Washtenaw County will soon offer burials without concrete vaults.

Non-commercial, fact based reporting is made possible by your financial support.  Make your donation to WEMU today to keep your community NPR station thriving.

– David Fair is the WEMU News Director, and host of Morning Edition Contact WEMU News at 734.487.3363 or email him at dfair@wemu.org

One thought on “The Green Room: The cultural colors of green burial”