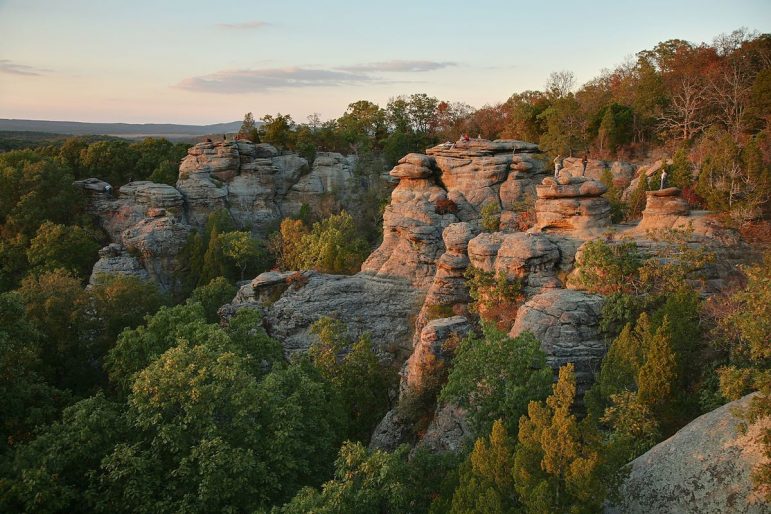 Garden of the Gods features 3,300 acres in the Shawnee National Forest in Illinois. Image: Daniel Schwen

Editor’s note:  This is part of a daily series featuring one natural attraction in a Great Lake state or province. Of course, each state and province has many more than one great natural feature. So nominate your favorites in the comments below.  At the end of the series we’ll poll you on the region’s greatest natural feature.

The already-awe inspiring southern Illinois has a ringside seat for a natural wonder not seen in 40 years.

On August 21, more than 200,000 visitors will descend on an area five hours south of Chicago to catch a total solar eclipse, said Marla Cichowski, the vice president of media relations for Time Zone One, the public relations agency for Illinois Office of Tourism.

For 2 minutes and 40 seconds, the sky will go dark as the sun passes behind the moon. The partial phases will begin at 11:52 a.m. with the main event predicted for 1:21 p.m.

Of course, the solar eclipse is  a global event — but not everyone will see a total eclipse. Carbondale, Illinois is a top spot for viewing because that quick window is among the longest, according to NASA.

And the region is also home to a much more enduring natural wonder.

Garden of the Gods features sky-high rock formations that have endured for 300-million years, said Carol Hoffman the executive director of the Southernmost Illinois Tourism Bureau. 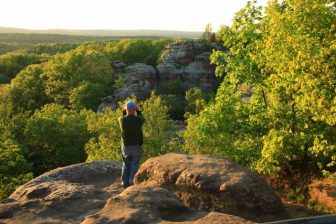 Geologists believe the sediment layers at Garden of the Gods were 5 miles deep until an uplift of the earth millions of years ago.

Hikers can perch atop layers of rocky earth, stacked more than 100 feet above the forest floor.

“There are great views and it is unexpected for Illinois, so people are generally surprised by these types of bluffs and cliffs,” said Hoffman.

Lesser known areas of the Shawnee National Forest include Pomona Natural Bridge, a 90-foot long, natural stone bridge that stretches over the canyon floor about 30 feet below. A trail leads hikers from a parking area, to a one-third mile loop that takes them over the 90-foot stretch.

The Garden of the Gods tops our list as a unique natural feature within Illinois, especially with a solar eclipse headed its way.

List  your favorite natural feature within Illinois in the comments below. Later we’ll list the top vote getters in a poll of the region’s best natural feature.  Extra credit given for sites within the Great Lakes basin.  (And yeah, we cheated today with our outside-the-basin Illinois nominee,  but how could we ignore an eclipse?)

Editor’s note: This story was updated to reflect Marla Chichowski’s appropriate title and the correct depth of sediment layers at Garden of the Gods prior to the uplift.