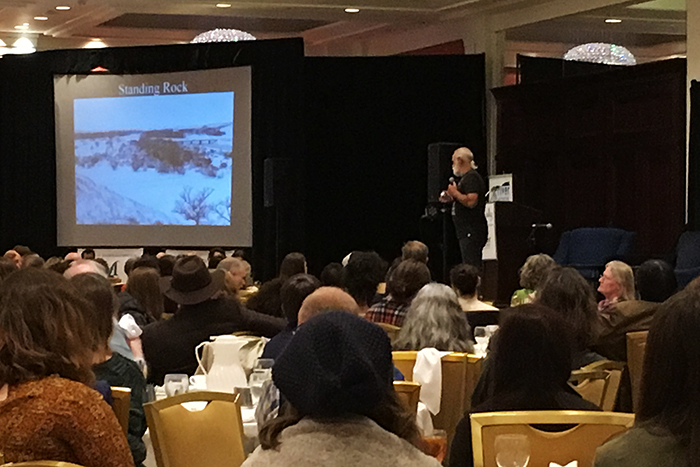 They participated in nearly 60 workshop on river health and water quality. Presenters discussed tools for monitoring watershed health, ways to encourage the public to engage with rivers and stewardship and tips for running river-related nonprofit organizations.

Grand Rapids was selected as the host location in part because of its recent focus on restoring the Grand River.

“Coming into 2017, we knew we wanted to do (the conference) in the Great Lakes region, and Grand Rapids had a great river story to tell with the restoration and revitalization of the Grand River,” said Alice Srinivasan, director of community engagement at River Network.

Environmental justice was a central focus. Dorceta Taylor, a professor and director of Diversity, Equity and Inclusion at the University of Michigan’s School of Natural Resources and Environment, gave a keynote speech about the history of the conservation movement and the roles of power and privilege in it.

“Environmental justice has been a huge issue this past year, so we really needed to highlight that,” said Srinivasan. She referenced water crises in Michigan and throughout the country and conflicts about access to water. “Those are really hard issues to deal with sometimes, but we’ve had to shed some light on those.”

One lunch plenary included individuals who participated in the protests against the Dakota Access Pipeline at Standing Rock Indian Reservation. They shared vivid stories, photos and lessons from their experiences.

“You got to hear some details you would have never heard from the Standing Rock situation had we not heard directly from the people who were there on the ground for months,” Srinivasan said.

Srinivasan appreciates the opportunities the conference provides each year to hear stories like those from Standing Rock.

“I’ve done this three years now. I get the most out of making connections to people who are doing similar work, who share our goals and our passions and who have so much knowledge. We bring together experts from all over the country,” she said.