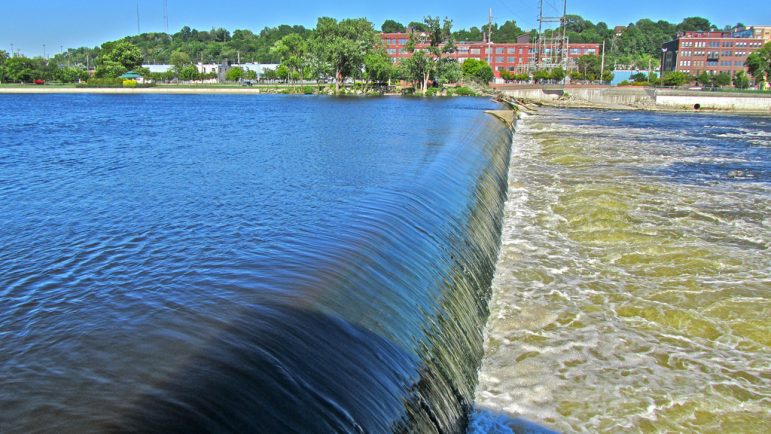 This story is part one of a series on dams. Read parts two and three.

Since Michiganders drive on them every day, roads and bridges are often the first things that come to mind when it comes to the condition of Michigan’s infrastructure. Less visible — but just as hazardous if not properly maintained — are the state’s 2,500 dams.

Just as deteriorating roads and bridges can cause significant damage, aging dams in high-hazard locations have the potential to do great harm to the environment and to human life.

The Otsego Township Dam on the Kalamazoo River is one such dam. It’s in poor condition and located in an area that would see serious consequences if the dam were to collapse. Department of Natural Resources Director Keith Creagh said his department is removing the dam in conjunction with the federal Environmental Protection Agency.

The deteriorating, high-risk Hamilton Dam in Flint is also slated to be removed.

“When we become aware of a dam that’s got problems, that’s a threat to the public, we take it very seriously,” said Department of Environmental Quality dam safety chief Byron Lane. “We work with the owner to either repair it, remove it, or at least lower the water level behind it so that if it did fail, it wouldn’t end in fatalities.”

Creagh estimates Michigan has about 2,500 dams. Ninety percent of those, he said, will reach their life expectancy — the age they were designed to last until — by the year 2020.

The DNR is responsible for about 55 of those dams. The DEQ oversees the rest.

Creagh said dams can pose a problem when they impede the natural migration of fish through rivers. Some dams have the potential to cause significant harm in high-risk locations if proper maintenance or repair is not kept up and the dam fails.

“We don’t have the resources to take out all those dams,” Creagh said.

Anne Woiwode, the conservation chair of the Sierra Club Michigan chapter, said dam collapse can be detrimental to the environment.

“It can take many years for waterways to recover,” Woiwode said. “The sediments behind the dam can destroy the habitat for aquatic species downstream.

“So, the restoration of rivers by removal of dams is a high priority from a restoring native habitats and ecosystems perspective. If we’re going to protect a wide range of species, having sufficient habitat for them is important,” she said.

Lane, at DEQ, said dams can have damaging effects on fisheries and healthy migration patterns of fish.

“Some dams have a fish ladder that allows fish to get by, but even then they aren’t really that effective,” he added.

Woiwode said, “There are a lot of rivers in Michigan where the older dams could be removed in order to improve the habitat and ecosystem. There are species that are native to Michigan that would benefit from being able to run up and down the full length of the river.”

In these places, she said, removing the dams would allow fish and other aquatic species to have a “direct connection from the headwaters down into the Great Lakes.”

But some dams offer benefits as well as risks. Some high-risk dams keep contaminated sediment from flowing all the way down a river, officials said. Whether the dam collapses or is removed manually, the question remains about how to clean up the contamination safely.

The Otsego Township Dam exemplifies this challenge. Upstream from the dam, polychlorinated biphenyls (otherwise known as PCBs) were once used in paper mill operations along the Kalamazoo River. Those PCBs contaminate the soil and sediment backed up for more than a mile behind the dam, Woiwode said, making for a difficult — and costly — cleanup situation.

Since last spring, the DNR and the federal Environmental Protection Agency have been cleaning up the PCB contamination. The structure itself is expected to be removed in 2018.

“The interest in restoring the free flow of the river is very high, but the cost of getting the PCBs from behind the dams cleaned up is enormous,” Woiwode said.

PCBs or not, the cost for repairing and replacing dams is “all over the place,” Lane said. “Regular maintenance doesn’t take much, but the older it is and the worse shape it’s in, the more it’s going to cost.”

For major dam repair, Lane said it can cost anywhere from $200,000 up to half a million dollars. “Some will be more than that.”

According to Lane, dam safety procedures and standards are regulated under a section of the Environmental Protection Act. These dam safety laws, he said, apply only to the largest dams that could cause problems for an area upon failure, of which there are roughly 800 in Michigan.

“The smaller ones don’t have enough water or are not high enough to cause real damage if they fail,” Lane said.

The dam safety laws require regular inspection of both public and private dams. The frequency of these inspections depends on a dam’s “hazard potential,” which is contingent upon its location and reflects the possible consequences if the dam were to fail.

“If it’s a low-hazard dam, you might just get a farm field wet. If it’s a high-hazard, you might get houses impacted or destroyed, even fatalities,” said Lane. “It depends on the dam and where it’s located as to what the consequences would be.”

Lane said the department is working on making a map of dam ratings across the state that will be publicly accessible. An earlier version was slated to be rolled out in 2001, but Lane said the attacks on Sept. 11 made officials hesitate to map their infrastructure publicly.

Lane said most of the dams were built in the early 1900s, often designed to have a life expectancy of about 50 years.

“A fairly high percentage of them are past or reaching 50 years, but that does not necessarily mean that once 50 years comes, the dam is automatically in danger of failing,” Lane said.

Like a car, he said, a dam has lots of parts and pieces — with regular maintenance and good care of those parts, it can outlast its expected lifetime.

Tomorrow: This dam removal tool moves data rather than cement.