Screen shot of GLATOS, a system that allows for sharing fish-tracking data across the Great Lakes basin.

Biologists and scientists have teamed up to track fish across the Great Lakes using sound–a literal Great Lakes echo.

It’s like the world’s biggest game of Marco Polo, but with fish.

The Great Lakes Acoustic Telemetry Observation Systems, or GLATOS, is a network of researchers sharing fish-tracking data from across the Great Lakes basin.

Acoustic telemetry tracks fish by surgically inserting a tracker into them before releasing them back into the water. As the fish travels, it emits an audible ping that can be picked up by markers placed in bodies of water across the region.

The problem for some researchers is that tracking a fish relies upon the placement of their markers, said Chris Holbrook, GLATOS technical coordinator. 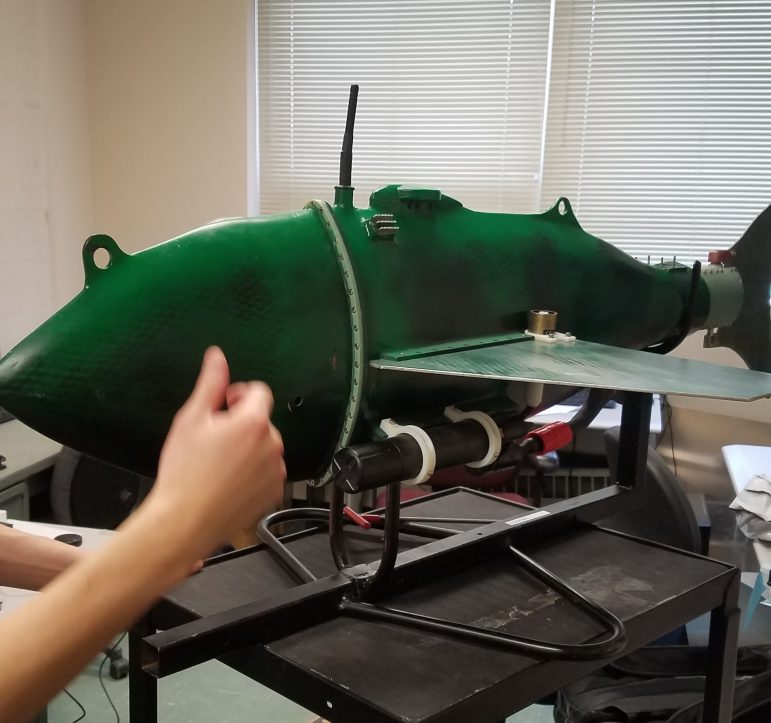 Xiaobo Tan working on the newest model of GRACE in his lab at Michigan State University. Image: Max Johnston

“The most general and popular method: you put out an individual receiver and tracker and you determine what fish were present at that point,” Holbrook said.

The GLATOS system is different because of its range. In most cases, if a researcher releases a tagged fish that finds its way out of the range of that researcher’s own receivers, that information would be lost. GLATOS has hundreds of stationary receivers placed throughout the Great Lakes. A researcher who is a member of GLATOS has access to data picked up by all receivers across the Great Lakes.

Tracking can be imprecise and affected by many variables, said Carl Ruetz, a researcher out of Grand Valley State University who tracks lake sturgeon with sound. Ruetz is not a member of GLATOS.

“With our array, the only thing we can tell you is whether or not (a sturgeon) was picked up by a particular receiver,” Ruetz said. “(Detection) also depends on if it’s a windy day. Is it stormy? Is there a lot of boat traffic? There are lots of things to consider.”

If a signal from a tracked fish is picked up, the GLATOS database can provide specific information, like a timestamp on a fish’s arrival and departure, that researchers couldn’t get otherwise, said GLATOS Director Charles Krueger.

“They’re able to get that date, the time and place, so it expands their receiver coverage well beyond the few receivers they might be able to purchase,” Krueger said.

What distinguishes GLATOS are its resources and dense network of receivers, Holbrook said.

“We’re essentially using the receivers in a way that’s analogous to GPS satellites,” Holbrook said. “If you have a grid of receivers that are close together enough that one signal is detected on multiple receivers, you can use the timing of that detection to get a precise position on that fish.”

The idea of a data network for tracking fish stemmed from a 2001 project tracking walleye in Lake Erie, Krueger said. He and his team had difficulty tracking walleye that move long distances across multiple research jurisdictions. They brainstormed a way to track fish across the Great Lakes. 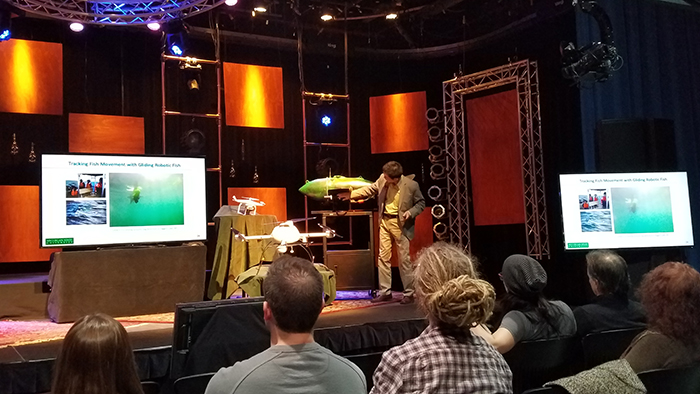 “We actually envisioned we could wire Lake Erie and find out where the walleyes went,” Krueger said. “We had never conceived of being able to do something like that. Now we have the technology to do it.”

Membership to GLATOS is free and open to anyone working on an acoustic telemetry project in the Great Lakes. In return, GLATOS asks members to upload their tag detection data to the database on its website for other researchers to track their own fish, Holbrook said.

While static trackers are in use now, Holbrook said GLATOS is trying to develop mobile methods of tracking.

The biggest development in mobile tracking has been the “robofish” Gliding Robot ACE, or GRACE, developed by Xiaobo Tan, director of the smart microsystems lab at Michigan State University.

The robofish is an about-a-yard long, green fish lookalike outfitted with fins and a tail. An operator pumps water in and out of GRACE to ascend and descend, while shifting water around the hull to glide through water. GRACE is essentially a mobile receiver and the goal is to have a “sea” of robofish to track fish in and across any body of water, Tan said.

“It will allow robots to do underwater communication, between each other or between the robot and the base station,” Tan said.

GRACE is the future of fish tracking, Holbrook said.

“The first big goal for GRACE is to put the receiver on and make it a mobile platform,” Holbrook said. “That is advancing the field as a whole because now we don’t have to guess where a fish could be.”