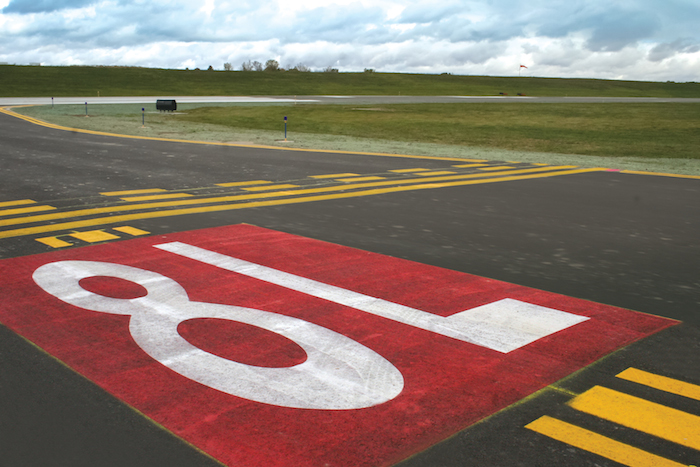 Runners, lace-up. In October, you’ll get the chance to race each other on an actual airport runway and maybe duck under a 747.

Talk about creative land use. The Gerald R. Ford International Airport recently announced plans for a 5K. The race will be on Saturday, Oct. 7.

“It’s a bucket list-type thing,” said Tara Hernandez, director of marketing and communications at the airport. Post-9/11, people probably didn’t think they’d have opportunities to do stuff like this, she said.

The Grand Rapids airport isn’t the first to hold a 5K on a runway. Chicago Midway and Tampa International Airport have hosted races in the past. And, while technically not a race, Michigan State University’s basketball team ran all over a runway aboard the aircraft carrier the USS Carl Vinson in the Pacific Ocean in San Diego when it lost a game there against the University of North Carolina Chapel Hill.

The race will be held on the airport’s general aviation runway. That’s the runway used by private planes. The two commercial runways will stay open.

Runners will have a chance of running underneath a 747 as it lands.

The route will also take runners underneath the runway through a tunnel.

“We are giving West Michigan a chance to experience our facility like never before. This event will not only encourage family time, but it is promoting a healthy lifestyle and aviation, as well as benefitting a wonderful local charity,” said Jim Gill, the president and CEO of the airport, in a news release. Proceeds will go to Make-A-Wish Michigan.

The race will come soon after some beautification and functional improvements at the airport, though the race route won’t be near the projects. Hernandez said. Renovations to the airport’s viewing park are underway and will hopefully reopen in May. Fans will be able to see the race from the viewing area.

A consolidated security area construction project, which includes a “green” roof with plants, should also be done by the time of the race, Hernandez said.

Race registration is $28 and includes a T-shirt, snacks, drinks and giveaways. Top finishers will get awards. A fun run / walk is cheaper and shorter at $15 a person for a one mile route. Rates for both events increase in April and September. Register online at http://triviumracing.com/event/grr-runway-5k/ .