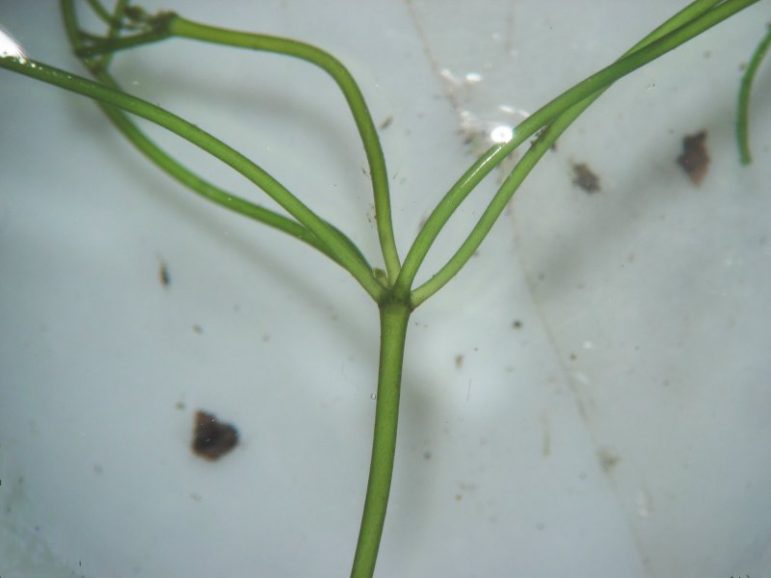 Starry stonewort is one of the plants MiCorps seeks to control. Image: Wikimedia Commons

Early detection is often critical in the fight against invasive species.

Volunteers in the MiCorps Exotic Aquatic Plant Watch program must complete in-person training. The video will serve as a refresher for those that have completed the training, and increase volunteers’ confidence in identifying plants on their own, Latimore said.

Identifying invasive plants gets easier every year, said Marilyn Merit, a coordinator for two lakes in the MiCorps lake program and who plans to have volunteers view the Exotic Aquatic Plant Watch video as a training tool.

Starry stonewort is a new and rapidly spreading invasive species in both Michigan and Wisconsin. It can crowd out native species and make it difficult to swim or boat. To create awareness of this invasive plant, University of Wisconsin Citizen Lakes Monitoring Network created a video on identifying it.

“It looks similar to native species, so we wanted to give people a good mental image of it,” said Paul Skawinski, the educator for the University of Wisconsin Extension Citizen Lake Monitoring Network. Starry stonewort can be easily recognized by the tell-tale star shape of its reproductive structures.

However, if no “stars” are present, starry stonewort is hard to identify without sending samples in for genetic testing, Latimore said.

Chemical and physical treatments are expensive and not particularly effective against starry stonewort. Researchers are looking for ways to find it faster. Training citizen lake monitors to detect it early is the main weapon against this invasive plant.

Battling invasive species means that they must anticipate new invaders.

“With invasive species, there is always something new,” Latimore said.

To stay up to date, MiCorps plans to make quick 60 second videos about individual invasive plants, as well as a video to guide lake monitors on what to do if they find these plants.

The University of Wisconsin Extension lake monitoring program is also working on new videos about species specific identification and their citizen monitoring protocol aquatic invasive species. Their long term project in the works is on native plant identification.

“If we can train citizens on what the natural community is, they can report if they see something they don’t recognize,” Skawinski said. By knowing what is not supposed to be there, citizen monitors could detect new exotic plants earlier and stay one step ahead in the battle against invasive species.