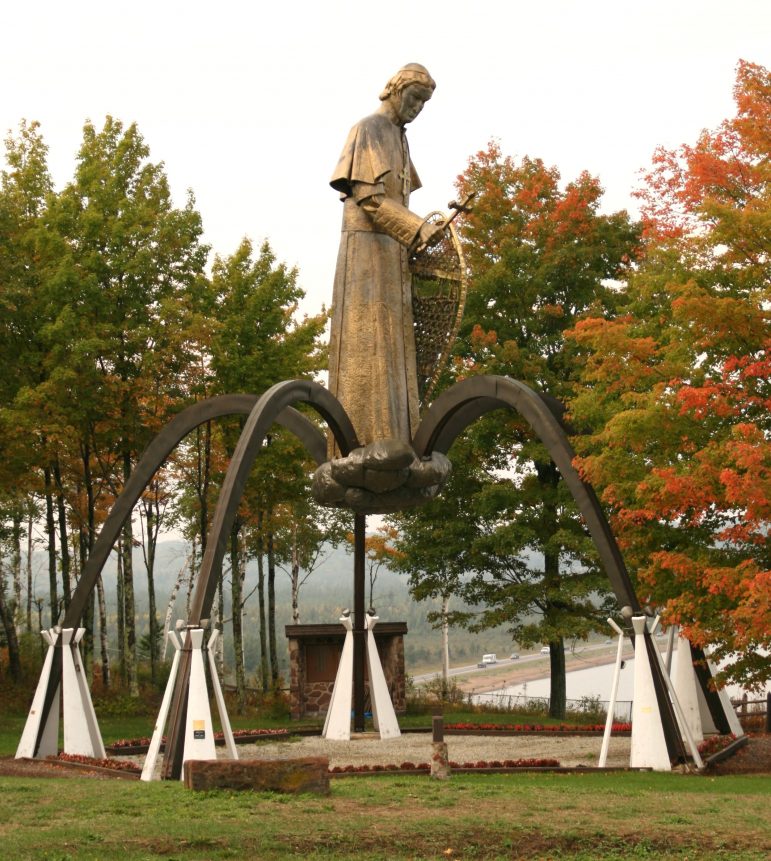 On a hill overlooking U.S. 41, between L’Anse and Baraga, Michigan, is the towering statue of a man who could become a saint.

Frederic Baraga, Michigan’s famous “Snowshoe Priest,” traveled the Great Lakes region in the 1800s spreading the Gospel. He later became the first bishop of the Roman Catholic Diocese of Marquette. Today efforts are underway to determine if his many works make him worthy of sainthood.

If granted, sainthood could be years away. But religious pilgrims and curious tourists already flock to the priest’s statue, his final resting place and to other Baraga sites.

Tom Nemacheck, executive director of the Upper Peninsula Travel and Recreation Association, said he has met visitors to the area who were there “specifically because of their interest in Father Baraga.”

But it is too early to calculate just how much interest in Baraga is propelling tourism, Nemacheck said.

At this point, “it’s probably not measurable,” he said. “Nobody’s got a number yet.

“(But) I have no doubt that individual travel has increased along those lines.”

And it could grow. Large tour companies put together tours for the faithful nationwide, Nemacheck said.  They have expressed an interest in doing so for Baraga followers “when he achieves sainthood.”

However, interest in the bishop is on the rise, she said. And she expects that interest to climb when it becomes apparent Baraga is closer to sainthood.

“Naturally, there is going to be a big uptick in religious tourism,” Young said.

Baraga, born in 1797 in Slovenia, studied for the priesthood and decided to work with Native American missions in North America, the Diocese of Marquette says.

He landed in North America in 1830, and spent the next 37 years traveling the Great Lakes region ministering to the Ottawas and Chippewas.

“During the summer, Baraga traveled on foot and by canoe,” according to the website. “During the winter, he traveled on snowshoes, giving him the title ’The Snowshoe Priest.’”

Baraga wrote long accounts of his missionary work and authored 20 Native American books, including “Grammar and Dictionary of the Chippewa Language,” which is still in use, the diocese says.

“From 1840 to his death in 1868, he ministered to the immigrants who came to the Upper Peninsula of Michigan to work in the iron and copper mines of the region,” the website says.

In 1952, the bishop of Marquette launched efforts to have Baraga declared a saint. He was elevated to “Servant of God” in 1973 and declared “Venerable” by Pope Benedict XVI in 2012.

The Vatican is investigating a possible miracle for beatification attributed to Baraga’s intercession. If approved, he will be declared “Blessed,” one step closer to sainthood.

The Baraga statue, made of copper, stands about 60 feet above a bluff overlooking Keweenaw Bay, according to the website for Baraga County, which is home to the statue and named for the famous bishop.

The statue, dedicated in 1972 and independent of the Diocese of Marquette, draws an estimated 100,000 visitors a year, according to Roadside America, an online guide to offbeat tourist attractions.

Religious pilgrims and tourists also are drawn to St. Peter Cathedral in Marquette, where the bishop’s remains rest in a chapel on the main level of the church. The cathedral serves the Marquette Diocese, which covers the entire Upper Peninsula.

“There’s a lot of interest” in the famous bishop, said John Fee, director of communications for the Diocese of Marquette. “People come in on a regular basis.”

The diocese does not record the number of visitors to the cathedral or Baraga’s crypt, so there is no official count or way to prove an increase in visitors, Fee said. But there does appear to be a growing fascination with the bishop, he said.

Fee said it is impossible to predict when or if Baraga could be beatified.

“It might happen tomorrow,” Fee said, or many years from now. “It’s a pretty indepth process.”

Michigan travel officials have seen a definite rise in tourism in Michigan’s Upper Peninsula, but don’t know how much can be attributed to Bishop Baraga.

“The Upper Peninsula in general has seen growth (in tourism) in the last couple of years,” said Michelle Grinnell, director of media and public relations for Travel Michigan. “Last year was a very busy year for them.”

Grinnell said Lonely Planet, the largest travel guide book publisher in the world, named the U.P. one of the top value destinations in the world last year.

Ginger Zee, chief meteorologist on ABC’s “Good Morning America,” broadcast live from the Pictured Rocks National Lakeshore in Munising in July 2015, Grinnell said.
And the U.P. was recently included in a roundup of 50 affordable vacations on the website cheapism.com, she said.

“These sorts of national accolades put the U.P. on folks’ travel radar, when in some cases it may not have been there before. And as they look more into the region they find attractions like the Bishop Baraga Shrine that are of interest,” she said.

“So even though we don’t have data showing trends to this specific attraction in the U.P., certainly we are seeing travel to the U.P. trending upward in recent years.”

Tracey Barrett, director of the Baraga County Convention & Visitors Bureau, said she has seen an upswing in tourism in her county, and many of those tourists are visiting the Bishop Baraga Shrine and statue.

They also are visiting other historic sites in the county, the county’s numerous waterfalls and Mt. Arvon, the highest point in the state, Barrett said.

The Bishop Baraga Association, based in Marquette, says other historic Baraga sites are scattered around the region. Among the sites: