Tell the biting winter breeze to buzz off, courtesy of this beachy video posted online just days ago.

“The Forgotten Coast” is a short film by Casey vanSanten, 38, of Ogden Dunes, Indiana. The footage of several Lake Michigan beaches was captured from May to November of 2016.

VanSanten is a kiteboarding enthusiast who recorded the footage during lulls in the wind necessary for his sport.

“These [shots] were filmed on optimum, perfect days,” vanSanten said, explaining the vivid blue hues in the film.

The drone is registered, and vanSanten operates it recreationally. He is also working on getting his pilot’s license and hopes to one day operate the drone commercially.

By day, vanSanten is a general contractor. He has been kiteboarding, which is like surfing with a hand-held sail, for three years. 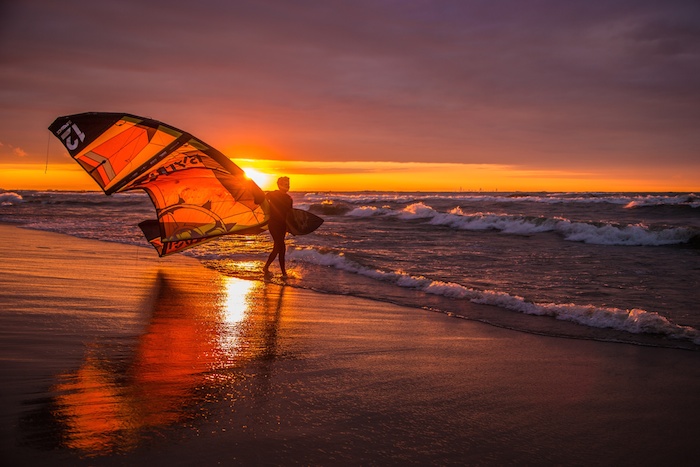 “It has changed my life completely,” he said.

It’s not his only Lake Michigan-based hobby, he said. He also enjoys boating.

VanSanten said he moved back to his hometown of Ogden Shores because of “the love for the big blue.”

VanSanten decided to make “The Forgotten Coast” when his hard drives started to fill up after shooting so much footage of the lake.

“I thought, ‘Man, what do I do with all this drone footage?’” he said.

VanSanten picks beaches to film based on which ones allow kiteboarding and hopes in 2017 to head farther north to places like Frankfurt, Michigan, he said.

But if you’re jealous of vanSanten’s warm days at the beach, don’t be. The days aren’t necessarily warm.

The best kiteboarding happens in the spring and the fall, when the winds are stronger than midsummer, vanSanten said.

“Some of the most beautiful footage of St. Joseph was from the middle of November.”