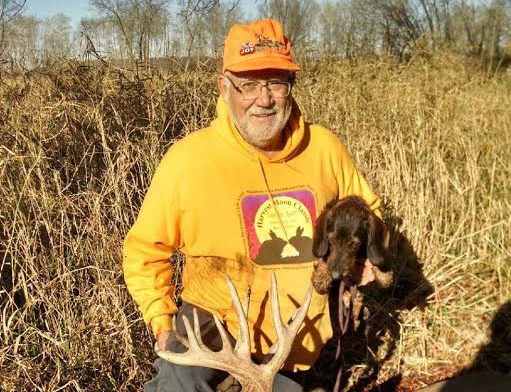 In Neshkoro, Wisconsin, Larry Gohlke is famous for his dog.

Nix is a ten-year-old dachshund; a “wiener dog” who sleeps in Gohlke’s bed every night.

Nix has a job to do: find wounded deer. Deer hunters who wound but cannot locate a deer enlist Gohlke and Nix’s help in tracking the animal.

Nix finds a deer more than 50 percent of the time, Gohlke said. And when Nix tracks the deer long enough that Gohlke can tell the deer was probably not mortally wounded, he counts that as a “win” as well. By that measure, Nix has a successful outing 80 percent of the time.

And every hunter Gohlke helps tells other people about Nix.

Gohlke said he can go into a bar or restaurant and people will say to him, “Hey, you’re the one with that deer-tracking dog, right?” 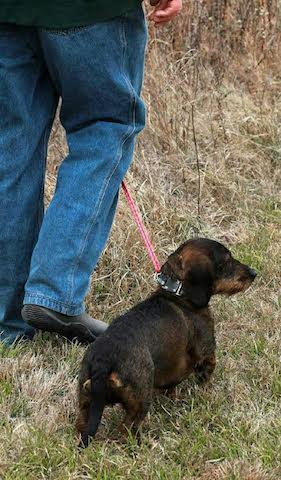 Dachshunds like Nix are specially bred for a keen sense of smell and athletic ability. These dachshunds look different than the glossy dachshunds with which the public is familiar. The fur is wiry. The legs are longer and the back is shorter.

“Most of the dogs that are tracking out there are dogs from European origins,” said John Jeanneney, Nix’s breeder. “Many of them are from us.”

Gohlke calls Jeanneney the “father of deer tracking in the United States.”

Jeanneney has been tracking deer with dogs for 40 years, he said. The 81-year-old retired history professor became interested in tracking deer while studying in France. German exchange students told him about deer-tracking dogs.

When he returned to the United States and shot but couldn’t find a deer, he knew there was a better way.

But there was just one problem: using dogs to hunt deer was illegal in New York.

“I’m not a trophy hunter. I felt very badly about it,” Jeanneney said. “What made a difference, too, is that I had the background to know something could be done.”

An experimental scientific collector’s license allowed him to track deer using dogs. From there, he co-founded United Blood Trackers and Deer Search, Inc. and advocated passing laws allowing dogs to track wounded deer, using his research as evidence it worked in New York.

States across the Midwest and Northeast began allowing the use of dogs to track wounded deer, including New York, Illinois, Indiana, Michigan, Ohio and Wisconsin, though it is banned in Pennsylvania and Minnesota.

The regulations can be strict and confusing, Gohlke said. Hunting deer with dogs is illegal in many northern states.

So blood trackers are careful to never call what they do “hunting,” Gohlke said. Instead, it’s “recovering.”

Mike Yeska, a taxidermist from Neshkoro, estimates he’s called Gohlke for help half a dozen times over the years. 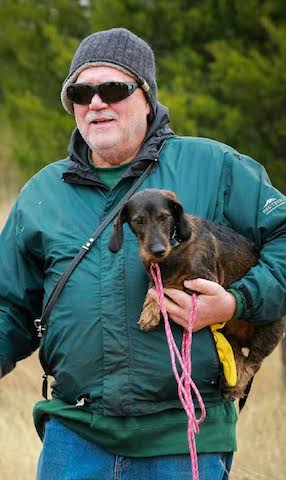 When hunters shoot at but can’t find a deer, they become distraught, Yeska said. “You don’t want it to suffer,” he said.

“Usually Larry and his dog are your last hope. Your last smidgen of hope,” he said. When Gohlke shows up with his dog, “Now you have a chance.”

Nothing ever goes to waste in nature, Gohlke said. If the hunter didn’t find the deer, coyote or vultures would.

But finding the deer means the hunter’s deer tag is used up faster. Gohlke is motivated in part by the desire to help hunters use their deer tag on the original deer rather than shooting one deer, losing it and then shooting a second deer.

Gohlke used to hunt extensively but now focuses on tracking. During rifle season, he estimates he helped track deer two or three times a day–and that was only half of the people who called him.

He doesn’t take payment, he said. Instead, he asks the hunter to pay it forward by helping out someone else in need.

“We all have a chance to be good, we just don’t all use it,” Gohlke said.

Nix, though, does get a little reward for all his hard work.

Yeska feeds Nix a piece of deer meat after the dog has found a wounded deer for him.

Even then, the dog isn’t ready to quit.

“You’re dragging the deer one way and Nix is dragging it the other way by the tail,” Yeska said.

It proves the adage “it’s not the dog in the fight, it’s the fight in the dog,” he said.