The United States and Canada are moving to ban microbeads — the tiny plastic bits in toothpaste and facewash that are big water polluters. Now scientists are focusing on a similar problem — and it’s lurking in your laundry pile.

When you do laundry, take a look at the tags on your clothes. You’ll find that most shirts and pants have some synthetic material — like polyester, nylon or spandex. Every time you wash them, tiny plastic fibers go down the drain. 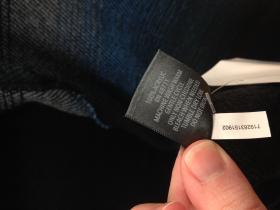 Melissa Duhaime, part of a University of Michigan research team, says most fibers are captured by wastewater treatment plants. But, she adds, “If you consider how much water passes through a plant a day, that still means that roughly 15 billion plastic particles could be released per day from a single plant and sent directly into the Great Lakes watershed.”

Her research showed that the majority of microplastics released by treatment plants into Great Lakes tributaries are fibers. By comparison, the microbeads in your face scrub are just a blip on the radar.

And microfibers are more harmful to fish, Duhaime says.

“The beads could possibly more easily pass through the digestive system and not hang around inside the fish for as long as a fiber that can get enmeshed in the tissue,” she says.

The problem might get worse. According to the American Apparel and Footwear Association, synthetics are becoming more popular. Especially with the rise of “athleisure” — a trend towards workout clothes you can wear every day.

But clothing makers are looking for solutions.

Jill Dumain works on this issue at Patagonia, which uses synthetics in fleece and other clothing. She says the plastics in a jacket can make it wind-resistant or waterproof, and it’s not so easy to replace a synthetic material with a natural one.

“And if we took a polyester shell, for example, or a nylon shell — what could we replace that with and what would it be? Maybe a wax cotton that wouldn’t at all be the same performance as that product,” she says. “So it would be a really different product at the end of the day.”

Beth Jensen of the Outdoor Industry Association, says natural materials are also more expensive and come with their own problems.

“Natural materials have a whole host of other tradeoffs that you also have to consider — whether it’s animal welfare in the supply chain of down and wool and leather,” she says. “Land use concerns, water use concerns. For example, cotton is a huge user of water.”

Jensen says potential solutions might lie in other areas. “Is there something that can be done with washing machines, for example?

“Putting a filter on a washing machine that could help address this problem,” she says. “Is it something where wastewater treatment plants have a role to play in the broader more industrial processing of water.”

Or is there a way to make clothing so that it sheds fewer fibers? Jensen says clothing companies don’t want to make any major changes until scientists have more data on microfibers.

That worries Sherri Mason, who researches microplastics at the State University of New York at Fredonia. She says by the time all that data is in, the world’s water could be overloaded with microfibers.