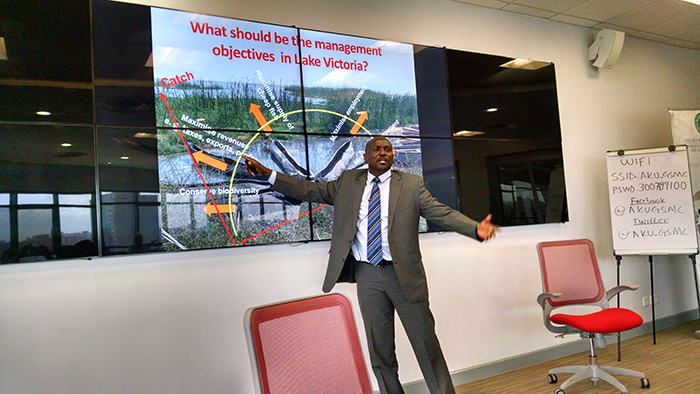 The future of the Great Lakes is imperiled, right?

Micro-plastics showing up in the water?  Check.

So which of the Great Lakes does this grim situation report apply to?   Erie with its algal blooms?  Michigan aquiver in trepidation with nightmares about the arrival of invasive Asian carp?  Huron with a possible nearby nuclear waste storage facility on the Canadian side?  Ontario, beleaguered by toxic pollution from polychlorinated biphenyls and mercury and by nitrogen run-off?  Lake Superior’s warming temperature?

Or does that description fit another of the world’s Great Lakes–Lake Victoria in East Africa?

Victoria is the world’s third-largest freshwater lake–after the misnamed Caspian Sea (it’s actually a lake, not a sea) and Superior.  It’s been described as “the lifeblood for the people of Tanzania, Kenya and Uganda,” the three countries that border it and where millions rely on its fishing industry.  “Pollution, over-fishing and ecological destruction have many worried about an environmental catastrophe,” one Australian news organization reported last year.

And “serious,” those problems are.

Consider over-fishing: The Lake Victoria Fisheries Organisation reports more than 200,000 fishers and 60,000 boats on the lake now, contrasted with about 50,000 fishers and 12,000 fishing boats in the 1970s.  The number of boats continues to climb by about 2,000 a year.   The resulting disappearance of big fish such as tilapia means people trawl for smaller ones that haven’t been able to reproduce yet.

I learned more about the Lake Victoria situation recently from Anthony Taabu-Munyaho, the research director for Uganda’s National Fisheries Resources Research Institute.  He spoke at a November environmental journalism workshop I led in Nairobi for about 22 journalists and documentary filmmakers from Kenya, Burundi, Tanzania and Uganda.  The Graduate School of Media and Communications at the Aga Khan University organized the weeklong workshops.

There have been “unprecedented changes” in Lake Victoria, Taabu-Munyaho says, and he adds illegal sand mining to the litany of woes there.  The sand is used for construction projects.

Yet he cautions that the “apocalyptically stated titles” of news articles may be misleading and, at least during his presentation at the workshop, eschewed doomsday scenarios.  For example, the reduction in fishing catches may not mean that a species is going extinct, he says, and he predicts that “we are going to win the war” against the water hyacinth, a particularly troublesome invasive plant from the Amazon basin, but won’t fully eliminate it.

To rescue Lake Victoria, Taabu-Munyaho sees a need for environmental management strategies, sustainable land management and use of the media to “empower people with knowledge” about sustainable development goals and the link between research and public policy. The press should try to make coverage of the lake’s environmental issues a priority, and should put “more focus on solutions.”

The threats to both sets of Great Lakes reflect common themes.  Among them are overexploitation of limited natural resources, greed, the pressure of development, politics, economics and the need for regulatory enforcement, transborder cooperation and political willpower.