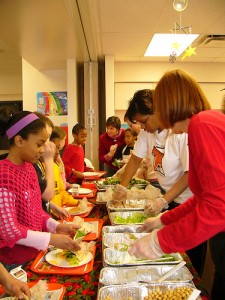 A program designed to increase schools’ use of local produce is cooking up resources for K-12 school food and nutrition directors so they can better incorporate healthy Michigan foods into cafeteria meals.

The effort by a group called Cultivate Michigan is part of the trend pushing local produce into meal plans in large institutions, including schools and hospitals.

“People are more educated than ever about the benefits of healthy eating,” said Barbie Ward-Thomas, the food service director at Gwinn Area Community Schools that participated in the project.

said. The program targets cooks and kitchen supervisors who deal directly with the food.

This raised awareness seems to be a national trend that Michigan started picking up on about eight years ago, said Doreen Simonds, director of Nutrition and Purchasing Services for the Waterford School District and member of the advisory committee for Making Michigan Recipes Work, a program to aid schools in this cause. “Parents were really the biggest motivating factor, so the trend really started at the home level,” Simonds said.

Although “the cost of farm to school is a little more than our budget can handle, bigger distributors, such as Gordon Food Service, are now carrying more Michigan produce substitutes,” she said. A recent fresh fruits and veggies grant for a satellite school serving Gwinn is also helping make local food feasible.

Cost is not always a problem. Waterford School District’s first source for food is a local county farmer’s market.

“We all thought it’d cost so much more money, but it actually saved us a bunch,” Simonds said.

And the educational value of such programs is significant, advocates say.

“It’s important to me that I partner with the teachers to help students learn the value of local produce in the classroom,” Ward-Thomas said.

Simonds agrees with the importance of providing farm fresh options and on educating students on why they should eat this way.

The Waterford School District started “Fruity Fridays,” when Simonds brought each classroom fresh fruits and vegetables for snacks, she said. “Kids are so used to processed food that they were amazed to see broccoli looks like brains and peaches are fuzzy,” Simonds said. “We’re having a blast with it.”

Waterford schools are making local produce a hands-on learning experience. Students care for five school gardens and two greenhouses. In the summer, the garden produce is used for a kids’ feeding program. The leftovers are donated to the community. Fall harvests go completely to the school cafeteria.

Both Waterford and Gwinn participated in the annual Michigan Apple Crunch, a statewide promotion to get everyone in K-12 schools to crunch into a Michigan apple at the same time on the same day.

Warren set up a mini farmers market at lunch time in their cafeteria, where the school dog mascot “Diggin” passed out apples provided by Brookwood Fruit Farms in Almont, Simonds said.

Next year Waterford plans to celebrate the Michigan Apple Crunch by breaking the Guinness World Record for longest line of fruit. It will take 11,000 apples.

“A lot of people have great ideas and want to start incorporating local produce into school cafeterias, but they don’t know where to go,” Simonds said. “Cultivate Michigan is the connection that can really help make this happen for Michigan schools.”

All schools were welcome to participate in this year’s Make Michigan Recipes Work program. Their participation totaled 87 attendees, Wojciak said.

“Our goal is for all Michigan institutions, particularly schools and hospitals, to purchase 20 percent of their food locally by 2020,” said Wojciak.

Challenges for purchasing local produce include the institutional staff’s lack of knowledge and tools to change their programs, Wojciak said. The training sought to bridge the disconnect.

“Our main focus was improving food preparation,” Wojciak said, “including knife skills, washing, and identifying produce suitable for use.”

Local is often defined as grown within the state. But since most institutions rely on a main distributor, this program encourages schools to simply ask that distributor to substitute common state grown options, Wojciak said.