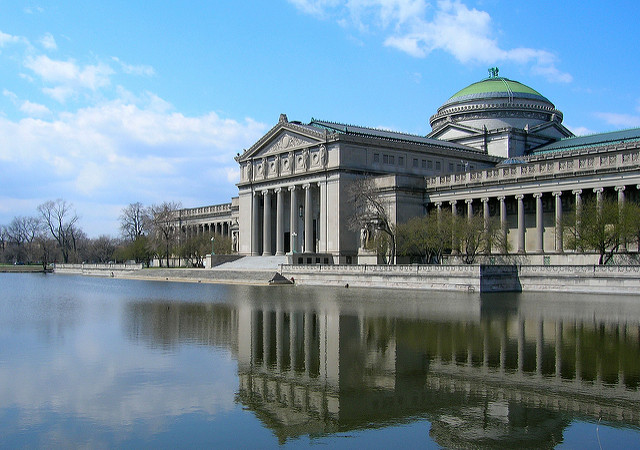 Museum of Science and Industry. Image: zooeybat on Flickr

Chicago high school students will soon be projecting environmental data onto a large globe thanks to a half million dollar federal grant received by the city’s Museum of Science and Industry.

It’s part of a program to help them visualize, understand and respond to climate

The grant is funded by the National Oceanic and Atmospheric Administration (NOAA) and promotes environmental education and finding solutions to environmental threats. After sorting through more than 170 applications, NOAA’s Office of Education chose the museum and three other sites to receive a combined $2.5 million in funding.

The project involves NOAA’s Science on a Sphere (SOS) technology, which projects data onto a globe so the teens can observe environmental trends and severe weather events. It will also promote environmental education through after-school programs.

Funding the project was “pretty much a no brainer” because of how well the program fit the grant’s goals and requirements, said Sarah Schoedinger, the senior program manager for NOAA’s Office of Education.

The program will span three years and involve working with at least 100 locations in Chicago, including public libraries, schools and the Museum of Science and Industry, said Bryan Wunar, the director of community initiatives for the museum.

It will teach high school students about severe weather events, climate change and how communities can prepare for the potential local impacts of these changes, Schoedinger said.

But the main focus involves 90 high school students at the museum where they  learn about climate change and extreme weather events using NOAA’s Science on a Sphere (SOS) technology.

SOS projects data onto a large globe so the students can visualize and understand it, Schoedinger said. Students can walk around SOS and see different phenomena projected on the earth.

The museum successfully used SOS in the past when actors from The Second City school of improvisation were recruited to teach visitors about science. Actors are often better communicators than scientists, Schoedinger said.

Now teens will be using the same technology to learn about a “wide range of environmental and sustainability-related topics, with a focus on resiliency,” Wunar said. Resilience means preparing communities for climate change impacts and finding solutions to potential problems.

The museum will use data from the Great Lakes region that is relevant to the students’ everyday experiences.

If successful, the program will be shared with other science centers that also have SOS, such as the Boonshoft Museum in Ohio, Science Central in Indiana and Hawthorn Hollow in Wisconsin, Wunar said. From there, the program could potentially be extended across a wide range of SOS locations that have access to a teen audience. 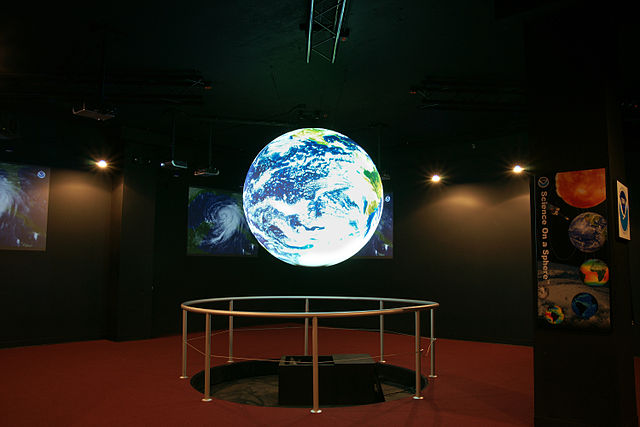 Science on a Sphere in Boulder, Colorado. Image: Byunghwan Lim

Another part of the program is letting the students share their knowledge with the public.

Climate is “changing in ways that are going to impact society across the board,” said Louisa Koch, the director of NOAA’s Office of Education. “Communities need to understand what changes they are going to experience most intensely and how that’s going to impact them.”

The teens will teach guests how to reduce their impact on the environment and work on exhibits and do hands on activities in the museum. That core idea is using teens as both learners and facilitators of learning, Wunar said.

Beyond having a voice in the museum, the students also will become environmental activists in the community, he said.

The museum is partnering with Resilient Chicago and the Chicago Metropolitan Agency for Planning, which help the city develop plans for combating climate change.

The teens will come up with real-world solutions to environmental problems and make recommendations city policy-makers, Wunar said. It’s giving them the opportunity to play a role in working with the people in charge in Chicago.

This is one of the main reasons the grant was funded.

“The whole purpose for us funding the awards is to help people understand what the vulnerabilities are in their community, as well as the solution to addressing those vulnerabilities,” Schoedinger said.

Climate change is a pressing issue for which cities need to be ready.

“There are so many different ways that climate change is going to impact the day to day lives of people, that we’re going to have to figure out how to engineer our systems differently,” Koch said.

Climate change is causing more intense rainfall, which can lead to overflowing sewage lines, flooding and bridge damage, she said.

“Climate change is happening now,” Koch said. “We’re seeing the impacts now. The more we can get the need for this kind of education out, the better.”