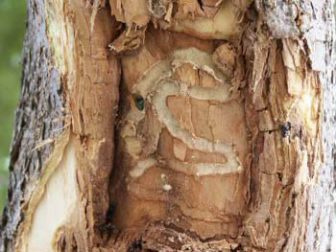 Experts used to say the number of ash trees lost in Michigan was tens of millions.

Now they say hundreds of millions, according to Deb McCullough, a professor in Michigan State University’s entomology and forestry departments. Still, there’s hope for the ash’s survival.

“In a nutshell, what I found is that [ash] seems to be holding on quite well,” said Dan Kashian, who studies ash tree regeneration.

The mortality varies among species, but now the devastation has become an international epidemic, McCullough said. While some patches are worse than others, it’s hard to find a lot of live ash trees in Lower Michigan and much of the eastern and central Upper Peninsula.

The culprit is the emerald ash borer, Agrilus planipennis Fairmaire, an exotic Asian beetle discovered in southeastern Michigan near Detroit in the summer of 2002. Adult beetles are metallic green and about 1/2-inch long. They hitched rides on ship and plane cargo originating from Asia and movint to Detroit.

“The longest history of the emerald ash borer in North America is right in the greater metro Detroit area,” McCullough said.

Kashian, an associate professor at Wayne State University, found himself in this prime location for assessing the plight of the ash.

“It’s been here longer than it’s been anywhere else, so it’s a good place to study what it’s going to look like, say, in Traverse City in 15 years or 10 years or something,” he said.

The three main ash species in Michigan are green, white and black ash. They grow in very different places, a 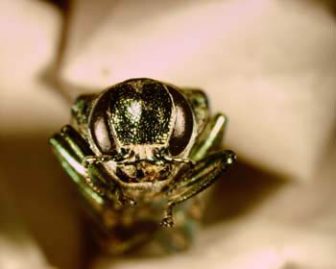 ccording to Kashian: black ash in swamps, green ash near rivers and white ash in the uplands.

Kashian is studying how the different species respond to the ash borer. So far, his team has only set up seed traps and other regeneration trackers in 17 pockets in southeastern Michigan that are almost entirely green ash.

For five years, the study quantified how many seeds fell and how many new seedlings took root.

“It looks awful because the big trees are all being killed, and in terms of it ever looking like it did before the emerald ash borer came through, it’s probably never going to happen,” Kashian said. “But the species does not — at least based on what I’ve seen — look like it’s going to disappear, which is what a lot of people were predicting.”

MSU and other leading agricultural researchers, as well as government and non-profit institutions, have created and now support the Emerald Ash Borer Information Network, a multinational effort to share the latest information about the emerald ash borer as it spreads.

“We will never see emerald ash borer densities at the same level that they were originally, because the carrying capacity of those systems has dropped hugely,” McCullough said. “When the big trees die, you’re not churning out nearly as many beetles, so the populations of the ash borer are going to remain lower for the foreseeable future. Whether they will stay low enough to give some of those young trees a chance to mature, we’ll have to see.”

Kashian said he wouldn’t go as far as to say the ash and the borer have reached an equilibrium.

“But we seem to be approaching some kind of balance with the bug at this population level and the trees hanging on,” he said.

The prevailing story of other studies is that the borer will eliminate ash in Michigan as it spreads. That’s because the studies were done in mixed forests where green ash were dying and different trees grew into the space, said Kashian.

In the pure stands of ash that Kashian studied, the dying green ash only made way for new ash seedlings.

“It’s very dependent on how much ash is there,” he said. “I think the more ash that’s there, the more likely it is to survive. A lot of people think intuitively the opposite — the conventional wisdom is that if it’s a pure stand, the bugs will just go crazy and kill everything.”

In northern Michigan, big stands of white ash are a concern. Though Kashian’s team hasn’t studied white ash yet, he suspects a similar phenomenon in which the trees growing in mixed forests won’t fare as well as those in pure stands. 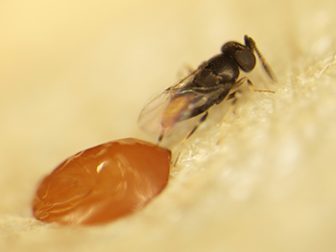 A parasitic wasp injects its egg in the egg of an emerald ash borer where it will hatch, grow and kill the host egg. Image: Jian Duan

While it’s still early to tell, Kashian said there is some indication that where parasitic wasps were released to control the ashborers, larger ashes survived and more of them regenerated.

It might not be ideal to release a nonnative species, he said, but if we want to maintain nice, big ash trees, it’s something we need to do.

“The most well-funded programs aren’t even talking about stopping the emerald ash borer, they’re talking about slowing it,” Kashian said. “Whether or not (bio control) is cheap is kind of a moot point because there’s not really any other choice.”

For the eight-plus billion ash trees in the forest in the U.S., it’s hard to justify treating with an insecticide, McCullough said.

“It’s just not economically or environmentally appropriate,” she said. “That means you have to look for other options, and right now we don’t have much else other than bio control.”

“We work with the federal entities and the state entities to identify infested sites within each individual state,” said Ben Slager, the manager of the lab facility.

The borer has been identified in 27 states, and the lab has three more to distribute to: Georgia, Texas and Nebraska, Slager said. The tiny, wasp-like parasitoids were first released in Michigan in 2007, and have been released in all eight of the Great Lakes states.

“One of the goals for our agency is to get parasitoids into every infested county,” he said. “Last year, (the lab) put out 1.2 million, the year before that it was 750,000 and we’ve been steadily increasing through the years.”

The Bio Control Production Facility releases three different species of the wasps and is in the process of introducing a fourth. Its production of the fourth species has been ongoing since last fall, Slager said, but while they are doing scheduled releases this season, it’s only on a limited basis since they are still getting their rearing methods and procedures down.

The benefit of the new species is that it can lay eggs in trees with thicker bark because it has a longer ovipositor.