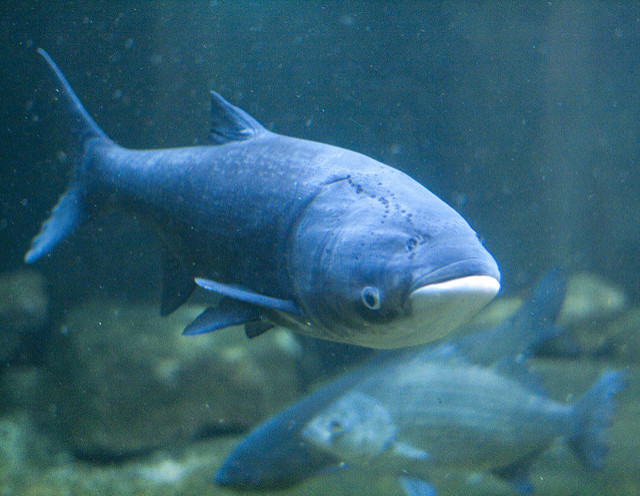 Anglers are to the Great Lakes what the military is to the United States: the last line of defense against invaders.

“Anglers are kind of the eyes and ears on the water for us,” said Seth Herbst, aquatic invasive species coordinator for the fisheries division of the Michigan Department of Natural Resources.

Fortunately, a recent study by researchers at Cornell University revealed that anglers in the Great Lakes region are aware of and concerned about the threat of aquatic invasive species (AIS).

Aquatic invasive species are organisms that enter water bodies beyond their own habitat and can harm the native species that reside there. Already they have significantly altered the ecological makeup of the Great Lakes.

In the 1950s and 1980s, populations of alewife, a herring species, peaked in Lake Huron and Lake Michigan. They multiplied rapidly because nothing ate them. The population of lake trout that would have eaten them was down from overfishing and the invasion of the parasitic sea lamprey.  Sea lamprey latch themselves to and feed on key predator and game fish and decimated native Great Lakes fish in the 1930s and 1940s.

And those pesky zebra mussels that hurt your feet when you wade into the water? Those are thought to have been introduced into the Great Lakes via the ballast water of ships travelling the St. Lawrence Seaway in 1988.

Also introduced by way of ballast water is the round goby, which was first discovered in the St. Clair River in 1990. The round goby consumes the eggs of native fish, many of which are important to the angling industry.

“Awareness of the advice and recommendations about what to do to prevent the spread of aquatic invasive species was very high,” said Nancy Connelly, the study’s lead author and a Cornell Department of Natural Resources research scientist. “Most anglers knew something about aquatic invasive species and knew of the recommendations. They were, in most cases, taking some actions like inspecting their boats, removing aquatic plants and animals, those sorts of things.”

With funding from the Great Lakes Fisheries Commission, the researchers mailed a survey to a random sample of 1,000 likely anglers in  Illinois, Indiana, Michigan, New York, Ohio and Wisconsin. The number of completed questionnaires returned was 1,487.

While more than 80 percent of anglers said they knew the rules and recommendations to prevent the spread of aquatic invasives, far fewer (45 percent) indicated anything beyond basic awareness.

The study created a score based on the anglers’ self-reported frequency of taking five actions to prevent the spread of invasives: inspecting fishing and boating equipment, removing plant or animal material, draining water-holding compartments on boats, drying equipment and disinfecting or rinsing equipment with hot water.

Ten percent of the anglers never did anything and only 5 percent always took all the actions, the study disclosed.

“They were definitely taking steps, but maybe not enough,” she said. “So our primary recommendation was that further outreach efforts by the states don’t need to necessarily focus on convincing anglers that they need to do this — they were already concerned and aware — but trying to help them by providing boat washing stations and other things that would help them actually take the actions that are necessary.”

Tom Hamilton, a retired fisheries biologist for the U.S. Fish and Wildlife Service, said anglers have the resources to prevent invasive species, it’s just a matter of whether all consistently use them.

“When it comes to invasives, there are a lot of us who are really trying to keep up with it,” he said. “Sometimes the invasives problem is bigger than we can handle, even though we know what we’re supposed to be doing.”

Near 100 percent compliance with recommendations may be needed at certain sites to prevent introductions of nonnative species, the study suggested. Even a low probability of transporting live bait between water bodies could result in spreading invasive species because of many visits by anglers.

“If you just have one fisherman with one or two Asian carp or any other invasive species in their bait bucket and they dump it, then it’s kind of a high unlikelihood that they would become established. But think about how many anglers we have in the state,” Herbst said. “Even a low risk at high frequency becomes a high risk. That’s an important thing that I talk to a lot of people about.”

“That’s why we need everyone to take those steps to make sure they’re not introducing unused bait into water bodies,” he said.

Holiday weekends are high-use times in the Great Lakes, Herbst said. Before Memorial Day, the DNR issued a press release saying that transporting live bait could introduce invasive species such as the Asian carp.

“We do have some bait that shows up from southern states and western states, and that’s where we would be concerned with the potential for juvenile Asian carp showing up in the bait trade,” Herbst said. “It’s unlikely, because we do have regulations in place. But to increase biosecurity — that’s why we put out those type of press releases.”

Juvenile Asian carp can be confused with common baitfish, he said. Anglers who find suspicious minnows in their live bait should take a picture of the fish and report it to the DNR, Herbst said. They should dispose of the fish in the trash rather than dump them overboard.

One thought on “Anglers enlisted in water fight”