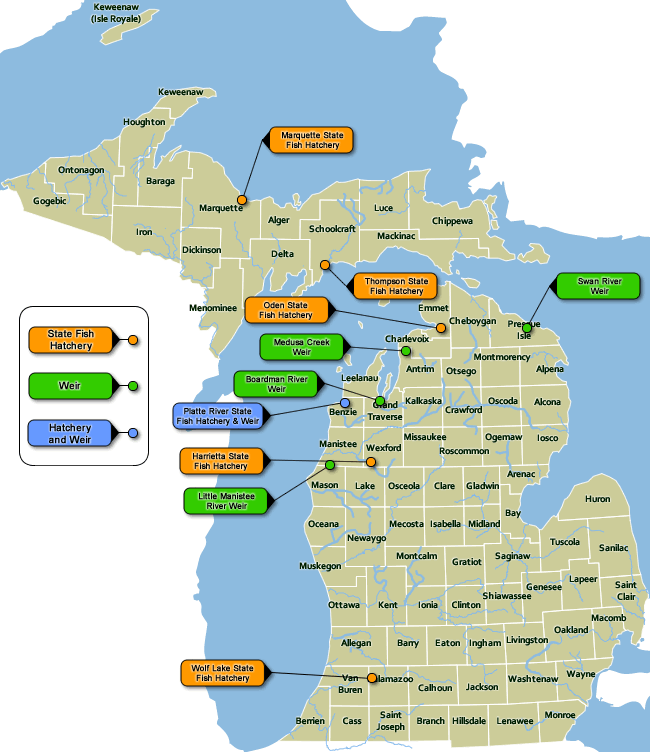 A bacterial disease in both captively raised and wild fish is imperiling popular salmon species in the Great Lakes Basin, a new study shows.

The findings are based on testing lake, brook, brown and rainbow trout and Coho, Atlantic, chinook and steelhead salmon from the Lake Huron, Lake Michigan and Lake Superior watersheds, as well as fish used for breeding at state hatcheries in the Upper Peninsula and northern Lower Peninsula.

Bacterial coldwater disease “threatens wild and propagated members of the salmon family worldwide” and can cause substantial economic damage, according to the study by scientists at Michigan State University.

It’s the first comprehensive examination of the prevalence of the bacterium in the Great Lakes Basin.

The disease is caused by a bacterium known as Flavobacterium psychrophilum, which has been associated historically with more fish deaths “than all other fish pathogens combined” at state hatcheries, according to the study.

“It’s a huge, huge issue in aquaculture in general, but especially in the Great Lakes,” study co-author Thomas Loch said.

The Michigan Department of Natural Resources (DNR) and other agencies use hatcheries to raise fingerlings that are released “to enhance sportfishing and associated industries,” the study said.

Ed Eisch, the DNR fish production program manager, said, “Bacterial coldwater disease is probably the most common thing we see. It’s probably our biggest fish health challenge,” but not the most deadly.

Currently, no vaccines are licensed in the United States for use against the bacteria, although some research shows that antibiotics can minimize its spread in hatcheries.

Hatcheries use vaccines to prevent diseases and usually administer them by dipping fish into them or through injections, Eisch said.

Antibiotics are mixed into the fish feed to treat infections.

Captive fish are often thought to face greater risk of diseases than their wild counterparts because they’re raised at higher densities under artificial conditions, according to the study.

But researchers found a significantly lower prevalence of the infection among fish at the hatcheries compared to wild fish. Reasons for the difference may include “a well-balanced diet, good husbandry and strict biosecurity practices.”

Two outbreaks of bacterial coldwater disease among lake trout at the Marquette Hatchery in 2012 were linked to disturbances in water quality caused by heavy rains, the study said.

In addition, hatchery operators constantly monitor their fish for pathogens and abnormal behavior, and can administer medications when necessary.

At DNR hatcheries, the primary method of monitoring is by observing the fish every day and how they behave, Eisch said. Technicians and hatchery biologists “are always on the lookout for changes in feeding behavior, fish that may be riding high or looking weak and any signs of moribund fish.

“That’s our absolute best defense, so you can respond before it becomes a real issue,” he said. “If we catch it early, we can treat it fairly easily” without antibiotics.

Loch, the study co-author, said the findings are important, particularly from a management perspective because it shows that some efforts are effective at hatcheries to prevent spreading the bacteria from parent to offspring, but more can be done.

Loch said researchers also are working on a vaccine that hasn’t yet been approved for commercial use “but seems to be fairly effective. We’re getting closer, but there’s a lot that goes into approval,” especially for fish that are to be released or eaten.

In addition, researchers from MSU, the U.S. Department of Agriculture’s National Center for Cool and Cold Water Aquaculture and UniversitÃ© Paris-Saclay in France have just completed a related study about the bacteria’s genetic diversity based on tests in Michigan and eight states elsewhere in the country.

The results of that second study “can be used to more appropriately investigate preventative control measures to reduce the spread and severity of bacterial coldwater disease,” they said.

One thought on “Bacterial disease threatens fish throughout the Great Lakes”