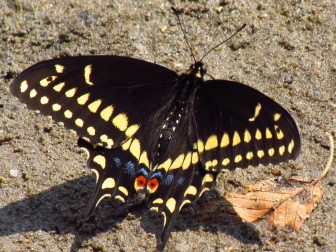 The black swallowtail would flit over Michigan as the official butterfly of the state if recently proposed legislation is approved.

Despite Michigan’s long list of official symbols, it’s one of just three states without an official insect or butterfly.

Sponsored by Sen. Curtis Hertel Jr., D-Meridian Township, the bill would put Michigan in line with 47 other states that have either a state butterfly or insect.

“We picked the black swallowtail because it is a fulltime Michigan resident,” said Susan Leahy, legislation chair of the group. “Most butterflies come here for our warm weather, then move on to new places. Our Birds, Bees and Butterflies Committee did a lot of research and concluded that the black swallowtail was the best choice for Michigan.”

The bill, co-sponsored by Sen. Wayne Schmidt, R-Traverse City, and four others, awaits a hearing in the Government Operations Committee.

A similar bill designating the monarch butterfly as the official state insect awaits a hearing in the committee. It is sponsored by Sen. Jim Marleau, R-Lake Orion.

“The monarch seems to be the poster child for all butterflies,” said David Cuthrell, a conservation scientist with the Michigan Natural Features Inventory at the Department of Natural Resources. “It’s the first one you learn about as a kid, but monarchs leave entirely in the fall.”

Is there room for both a state insect and a state butterfly?

Supporters of the swallowtail bill don’t oppose the monarch bill.

“They can both happen: We can have both an official state insect and butterfly,” Hertel said. “I think the monarch is a worthy insect. Hopefully we can work together to get both of these done.”

Cuthrell said there have been past discussions of designating the monarch and also a dragonfly for state insect.

Designating the swallowtail as the state butterfly can lead to teaching opportunities, Leahy said.

“We’re working with schools to stress the importance of butterflies and specifically the black swallowtail,” Leahy said.

“Butterflies are part of the nature food chain, they’re beautiful and pleasing to the eye, and they’re pollinators, and pollinators are pretty important,” she said. “With all the controversy in politics and the backdrop of hostility going on, it’s nice to have something pretty and I hope we can all agree on it.”