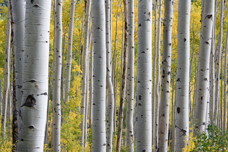 “The most concerning thing to me is how many of the diseases and insects are spreading,” said Tara Bal, forestry expert and research assistant professor at Michigan Technological University’s School of Forest Resources and Environmental Science.

Pests such as the invasive hemlock wooly adelgid bug and the spruce budworm, combined with the warming climate, threaten several tree and animal species, some experts warn.

Among the most worrisome are hemlock wooly adelgid bug infestations, which have attacked hemlock trees in five additional counties in the past five years, according to the department’s report.

“There are new counties added every year to the report,” Bal said.

Counties affected by this bug of Asian origin include Allegan, Ottawa, Macomb, Berrien and Muskegon, according to the report.

“Hemlock is an important tree for animal shelters, important to the soil’s nutrient content and for preventing soil erosion,” Bal said. “It provides shade and regulates stream water, which is important to fisheries. Species such as brook trout can be affected by a change of even a few degrees.

“This has already happened to Appalachian fisheries, where the loss of hemlock shade has raised the temperature of the Appalachian waters.”

The decrease in the hemlock population could have severe consequences for Michigan’s ecosystem, according to some experts.

“Hemlock wooly adelgid has been devastating where it has been able to establish itself,” said Andrew Storer, an expert on forest insect ecology and associate dean of Michigan Tech’s School of Forest Resources and Environmental Science.

“We could potentially lose entire species from our forests,” he said.

However, he said the DNR “is doing an excellent job. They are very engaged with what is happening in other states. The only thing limiting their efforts is funding, and they have actively pursued this as well.”

DNR forest health specialist Bob Heyd said the agency is using every resource at its disposal to combat the problem.

“We do a lot of work to bird dog this with other agencies and utilize a lot of grants to fund our work on these issues from state and federal sources,” Heyd said.

For some loggers reliant on the health of Michigan’s forests to make a living, the effects global warming will have on woodlands are frightening.

“The thing that is most concerning is how some of these different species of trees and the insects and diseases threatening them will respond to changing weather patterns,” said Warren Suchovsky of Dagget, a member of the Michigan Association of Timbermen’s board of directors and the DNR forest management advisory committee.

“It’s a major concern that as the climate changes that trees will grow in inhospitable environments and become more susceptible to disease and insects,” Storer said.

A warmer Upper Peninsula may prove more inviting for the hemlock wooly adelgid than the current climate, according to Storer, leading to more dead hemlock.

Some experts also warn about the return of the spruce budworm, currently affecting over 670,000 acres of forest primarily in the western UP, according to the state’s report.

The last spruce budworm outbreak in Michigan claimed 519,000 acres of forest between the 1960s and 1980s, according to the report.

“The spruce budworm can affect the ability of trees to reproduce and create new trees,” Suchovsky said. “The trees killed can be used for wood but they don’t produce new trees.”

This overabundance of dead trees can create a problem for mills, Suchovsky said. The trees that mills cannot process in timely manner simply rot away.

In addition, trees left to rot can present a fire hazard, according to Suchovsky.

While potentially hazardous to the health of many trees, the spruce budworm is an anticipated part of the logging business, according to Suchovsky.

“The spruce budworm infestations have been going on for hundreds of years on a regular cycle,” Suchovsky said. “It won’t wipe out the spruce or the balsam.”

To address the problems posed by invasive insects, the DNR must continue thoroughly surveying forests for the bugs and supporting those managing affected areas, Storer said.

Efforts to hinder spruce budworm focus on harvesting older, and thus more susceptible, trees and harvesting trees of a wider age range so that in the future older trees make up smaller proportion of spruce and fir populations, according to the report.