Veteran hiker, Joan Young of Scottville, Michigan, has hiked the 4,600-mile North Country National Scenic Trail end-to-end but has no patch to show for it.

Young seeks to remedy that this year as she prepares to commemorate the National Park Service centennial in a 100-mile hike challenge sponsored by the North Country Trail Association, headquartered in Lowell, Michigan.

“The challenge is 100 miles for the 100 years of national parks,” said Amelia Rhodes, communication coordinator for the North Country Trail Association, a nonprofit partner of the National Park Service.

“It’s a way to celebrate an important anniversary and to prepare a new generation for the next 100 years of national parks,” she said.

In Michigan, the trail generally traces the southern shore of Lake Superior until it crosses the Mackinac Bridge. That means if you want to hike the entire trail, you have to time the trip to hit the bridge on Labor Day, the only day it is open to walkers.

From the bridge, the trail winds down the Lower Peninsula near Ludington, eventually making its way to the Ohio border.

“The trail’s true length is a challenge,” Rhodes said. “It’s linear without many loops, so we don’t expect participants to necessarily hike 100 unique miles.”

Instead, the Trail Association offers multiple routes to complete the 100-mile hike challenge. 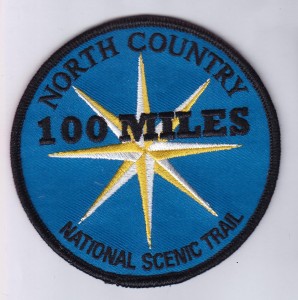 The hikers receive a commemorative patch when they complete the feat. Image: North Country Trail Association

“It’s open to our whole trail community,” Rhodes said. “Whether someone hikes their favorite mile 100 times or a 20-mile section five times, it all counts toward this year’s challenge.”

Volunteers from more than 30 trail chapters will lead short, guided hikes for part of the challenge.

Some chapters, like Clarion in Pennsylvania and Laurentian Lakes and Itasca Moraine in Minnesota, will lead a series of longer hikes to help participants meet the entire 100-mile mark.

Of the 2,600 people who signed up in January, two already sport the commemorative patch, completing their 100-mile hikes near Marquette and Marshall, Michigan.

Carmen Laguardia of Marshall was the first of the finishers, completing her last stretch from Battle Creek to Marshall on Jan. 18 despite the -6 degree wind chill.

“I hiked 60 unique miles and 40 repeated, even with the cold,” she said. “It was my goal to be the first finisher, especially because I’m a grandma.”

Laguardia hikes four to 20 miles every day on and off the North Country Trail.

“Hiking provides a sense of clarity, a sense of peace,” she said. “People don’t often realize the woods, lakes or waterfalls that surround them.”

Despite a slower start, Young is trying to follow in Laguardia’s patch-earning footsteps.

She leads weekend hikes for the Spirit of the Woods Chapter in Manistee, Michigan, which she founded in 1998.

“For day trips or longer backpacking trips, bring a local or living history book,” she said. “Reading about the past through biographies helps me get to know the trail in depth.”

Young used a spreadsheet to keep track of her miles while hiking the entire trail over 20 years.

“The spreadsheet became a puzzle, filling in new pieces on every hike,” she said.

Like Young of the Trail Association suggests that hikers log each mile using anything from scratch paper to a GPS-enabled hiking app.

And geotagged snapshots from hikers’ phones will be compiled into a story map to document what happened along the trail.

“We’re interested in where participants hiked, in or across states,” Rhodes said. “Any miles hiked are a great success, a step forward.” 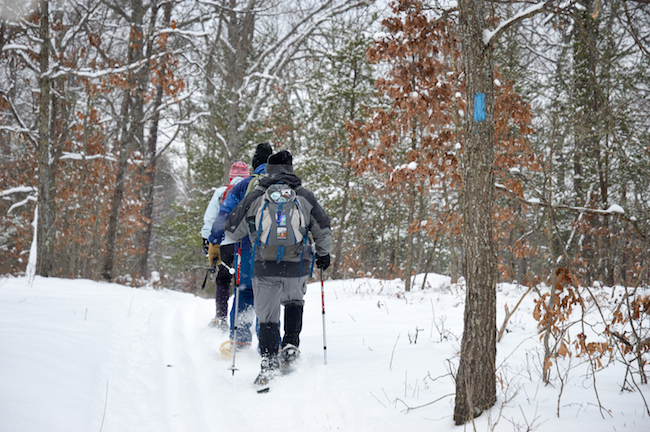 As an incentive to sign up, participating hikers will be entered in prize drawings throughout the year.