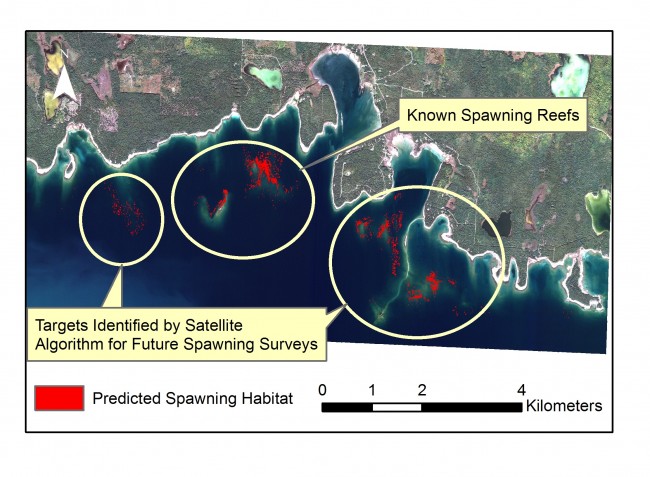 It might seem counterintuitive, but when trying to examine the bottom of Lake Huron, researchers discovered it is helpful to take a look from space.

Satellite imagery offers a new tool for identifying nearshore lake trout spawning habitat across broad areas of the Great Lakes, according to a recent study in the Journal of Great Lakes Research.

Researchers have been using satellite imagery to look at how the distribution of lake-floor algae in the Great Lakes is changing, said Amanda Grimm, lead author of the study and an assistant research scientist at Michigan Tech Research Institute.

They realized the difference might be seen from satellite, which would help select good lake trout spawning grounds.

Satellites scan broad geographic ranges, said Tom Binder, a senior researcher with the Geological Survey and a coauthor of the study. They help avoid labor-intensive searches with divers and underwater cameras.

“It’s not really realistic to physically survey the whole lake when you have a lake the size of Huron,” Grimm said. “The satellite data really helps us narrow down the likely candidates for where this natural reproduction of lake trout is happening.”

It does that by analyzing how much light is reflected from the lake bottom.

The study began after a project that looked at the physical variables within Drummond Island spawning sites, Grimm said. The researchers already knew where spawning was occurring, allowing them to test the satellite imagery against it. The idea was to confirm that the density of algae indicates higher-quality spawning grounds. 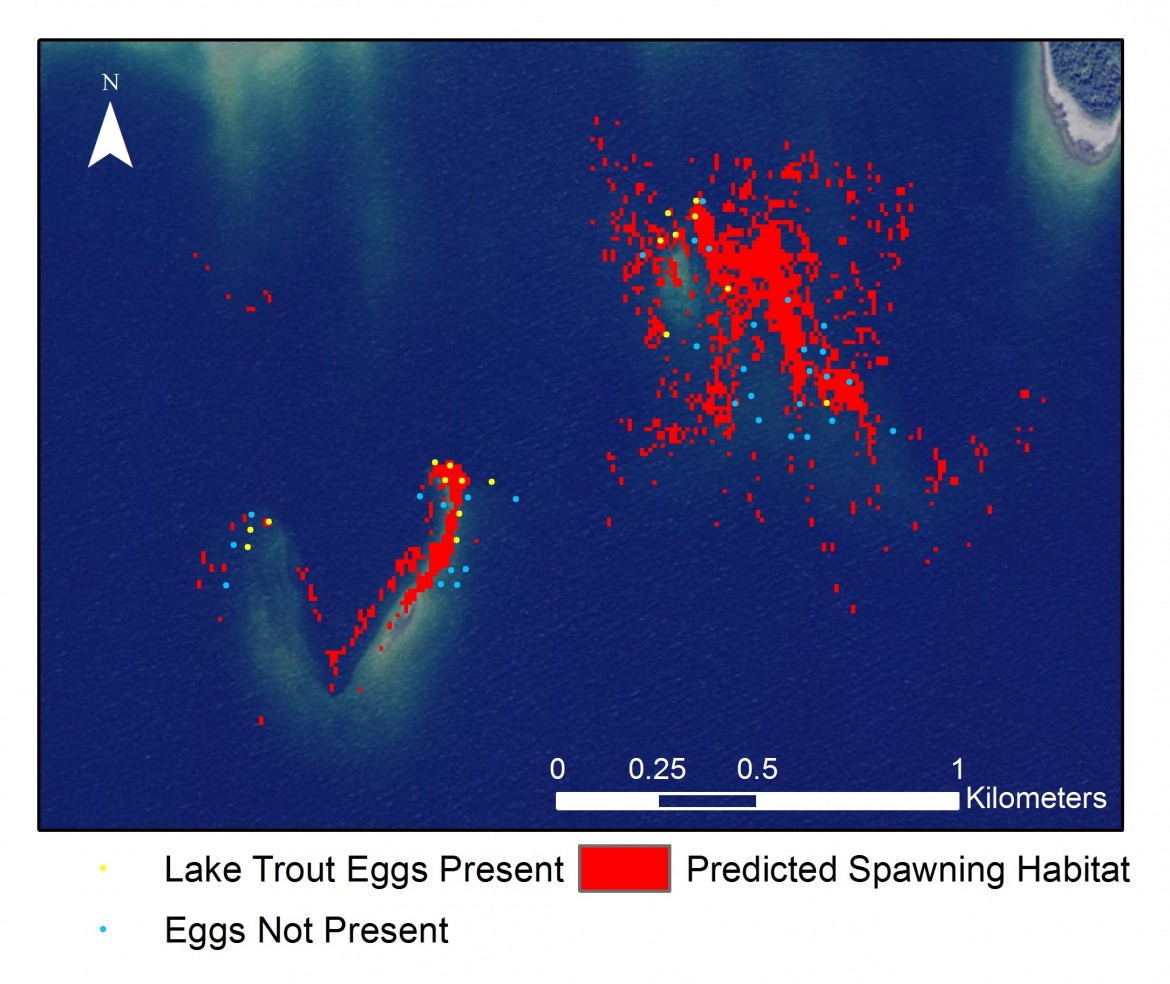 In this closeup of predicted spawning habitat areas for two shallow reefs that were surveyed for lake trout eggs during spawning season, yellow points indicate where eggs were found, and blue points where they were not. Image: Michigan Tech Research Institute

“It seems to work pretty well,” she said. “It’s potentially a useful method for identifying likely spawning areas in other parts of the Great Lakes, especially the clearer lakes, Michigan and Huron. There’s some interest in taking this methodology and applying it to the spawning areas around Beaver Island in Lake Michigan, but that’s not underway yet.”

There are limits. Satellites can only see so far into the water and trout spawn in deeper waters. But since Lake Huron is so clear, the researchers can see the lake bottom to about 40 feet deep, she said.

“The other troublesome part is that lake trout spawn in the fall, which is storm season,” said Steve Farha, another researcher at the agency and a study coauthor. “So it was pretty difficult to get these satellites in the right place at the right time with the right conditions.”

And it’s just a first step.

“It tells you where the probability (of finding spawning sites) is the highest,” Binder said.

The combination of overfishing and deaths from sea lamprey led to the collapse of lake trout in all the Great Lakes in the 1950s, he said. The Great Lakes Fishery Commission started lake trout restoration in the 1960s, and it is now one of the largest predator recovery endeavors in all of North America.

“It’s sort of unrivaled in terms of scale,” Farha said. “You’re talking 50 years or so of both stocking and sea lamprey control, with the expressed objective of restoring self-sustaining stocks in each of the Great Lakes.”

Sea lamprey are invasive parasites that latch on to fish with a suction cup-like mouth and live off of their blood.

Considering the money and effort that’s gone into stocking lake trout for more than 50 years, anything to maximize the probability of bringing the fish back is worthwhile, he said.

Binder said it’s uncertain whether hatchery fish are any good at reproducing in the wild. If the researchers can determine where spawning sites are, they can study the spawning behavior, he said.

“You could imagine that the wild-spawned fish are better at finding the best substrate than hatchery fish are,” Farha said.

The satellite technique could ease the work building artificial reefs, he said.

“If we know more about what lake trout use to select habitat, we can build those reefs to suit their needs a little better,” he said.

The researchers are unsure why lake trout spawning grounds are cleaner than the surrounding areas.

“It’s possible that the spawning dislodges a lot of algae and causes the lake bottom to be cleaner,” Grimm said. “But alternatively, it’s also possible that trout are selecting areas where there’s stronger currents and wave action so that their eggs don’t get buried by sediment and debris — and that also results in less algae build-up because the algae is getting fluffed off of the rocks as well.”

The lake trout’s preference of cleaner, algae-free spawning sites is key to relying on the satellite imagery, Binder said. It is as yet unclear if the approach is applicable to other species.

One thought on “Researchers eye trout spawning sites from space”