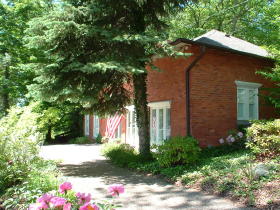 The roster of National Register of Historic Places in Michigan’s Lower Peninsula has grown by four with new designations in Saugatuck, Elk Rapids, Alpena and Detroit.

Among them are a 1904 pump house and a turn-of-the-20th-century church, both now serving as local history museums.

“The National Register is the official list of the nation’s historic places worthy of preservation,” according to the National Park Service (NPS), which administers the program.

Under NPS guidelines, they are “associated with events that have made a significant contribution to the broad patterns of our history or with the lives of significant persons in our past.”

In West Michigan, the brick Saugatuck Pump House on the bank of the Kalamazoo River marks where Saugatuck developed its water system after devastating fires wiped out a hotel and other buildings.

No organized fire department existed at the time, and the village was gaining popularity as a tourist destination, connected by steamship to Chicago and by rail to Grand Rapids, according to the nomination.

The building was abandoned in the 1930s because its pumping and generating functions were inadequate, and it was later renovated as a cottage by private tenants.

Located in a park next to the Mount Baldhead sand dune, the pump house is now a museum run by the Saugatuck-Douglas Historical Society. 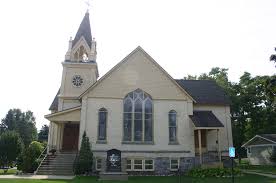 Also in West Michigan, the long-time First Methodist Episcopal Church in Elk Rapids earned its place on the National Register for its architectural and art significance.

Constructed in 1901-02, the church traces its origin to a circuit preacher who visited Elk Rapids in 1857 and founded the community’s “pioneer religious organization,” according to the nomination.

With its Gothic-inspired exterior, original pews and stained glass windows, the building is a “primary example of a Protestant auditorium church” of that period, the nomination says.

In 2011, the Elk Rapids Area Historical Society acquired the building to use as a local museum and archives.

In Northeast Michigan, Alpena’s Centennial Building – home for more than a century to the Independent Order of the Odd Fellows – was designated based on its architecture and connection to business and the city’s social history.

It dates back to 1876 and is “an excellent example of late Victorian commercial architecture,” its nomination says. The original owners, Samuel and Samantha Hathaway, were among the founders of the city.

The Odd Fellows bought the building in 1901 and used it until 1969.
In downtown Detroit, a complex of buildings designed by architect Albert Kahn, one dating to 1915-17 that formerly housed the Detroit News, is now on the National Register as well. 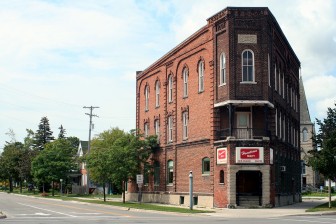 In 2014, a company affiliated with Quicken Loans executive Dan Gilbert bought the property.

The National Register also recently added two Upper Peninsula sites, one important to members of the Lac Vieux Desert Band of Lake Superior Chippewa Indians and the other connected with a strike important to labor history and women’s history.

Under federal law, listing generally doesn’t limit how owners use their property, although state and local preservation laws may impose restrictions, according to the NPS.

Sites listed on the National Register are taken into consideration in planning federal and federally funded projects. Their owners may qualify for tax credits and historic preservation grants.

One thought on “Michigan gets four Historic Places designations”