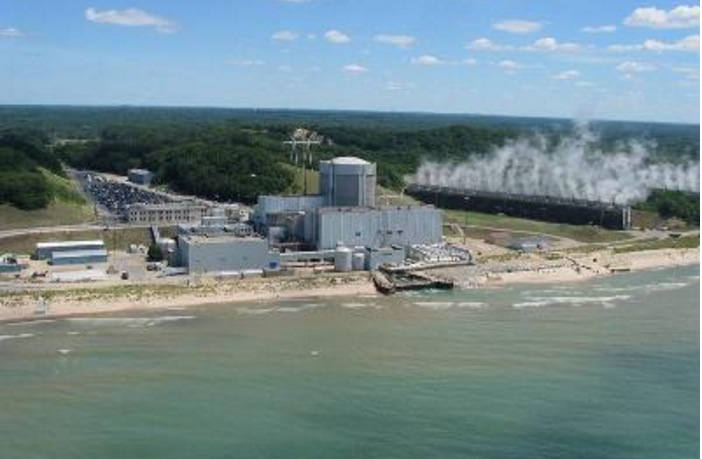 Anti-nuclear groups are identifying the types of transportation needed to haul nuclear waste across the Great Lakes region if a waste storage site is approved in Nevada.

They are adding state-specific details to the maps released by the U.S. Department of Energy. They show where barges could move waste across Lake Michigan and trucks and trains could move it across the Great Lakes region.

Beyond Nuclear and Nuclear Information and Resource Service wanted to localize a national policy when they highlighted truck, rail and water routes necessary for nuclear waste to travel under a proposed storage policy.

For the Great Lakes region, the two anti-nuclear organizations noted multiple places where railways can’t reach and where nuclear waste would have to instead travel across Lake Michigan.

Nationwide, the material would travel to a proposed site in Yucca Mountain in Nevada. There, a potential nuclear repository location would lay tens of thousands of tons of radioactive material to rest, said Kevin Kamps, Nuclear Waste Watchdog for Beyond Nuclear, a non-profit anti-nuclear advocacy organization.

As many as 453 barges full of used nuclear material could travel across Lake Michigan, according to the waterway maps. 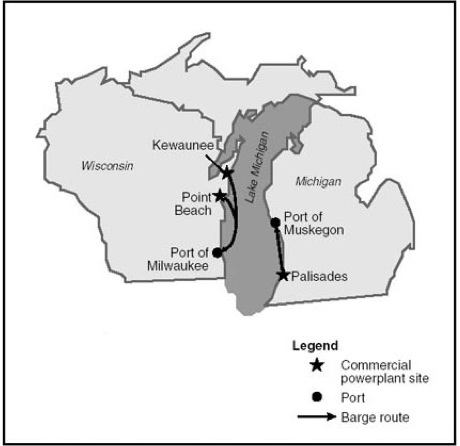 Each barge could hold up to 140 tons of waste, according to Nuclear Information and Resource Service. The sheer weight of each container would significantly increase the time to recover spilled nuclear material, Kamps said.

Nuclear energy advocates say that the waste transport is not a problem.

“This is an incredibly safe process,” said Mitch Singer, senior media relations manager of Nuclear Energy Institute, a policy organization that promotes the beneficial use of nuclear energy.

“Three thousand shipments of used nuclear fuel [have traveled] since 1964 and there’s never been an incident that resulted in a release of radiation from the casks,” Singer said. “There’s no permanent repository for used fuel, but shipments have gone from one plant site to another.”

Still, anti-nuclear groups fear the sheer size of the shipments, especially when considering the value of the Great Lakes.

“Each container would hold 200 times the long-lasting radioactivity released by the Hiroshima atomic bomb,” according to a Nuclear Information and Resource Service fact sheet.

The number comes from Marvin Resnikoff, senior associate at Radioactive Waste Management Associates, an environmental consulting company that evaluates the safety and economics of radioactive waste management and transportation. His research focused on the possible release of cesium, what Kamps calls a “highly volatile” material within reactors.

Resnikoff found that every pressurized water reactor, like that at thePalisades nuclear plant in Covert, Michigan, holds about 10 times the cesium released in Hiroshima, said Kamps.

“If containers went down in the lakes, water could cause a nuclear chain reaction causing a much greater release,” Kamps said. “If a container breached, it’d be a complete economic shutdown and a rescue would essentially be a suicide mission.”

But Singer says even if the boat went down, containers of waste would remain secure and contained underwater.

“There’s been a long history of safety in these [nuclear waste] casks,” Singer said.

The Yucca repository plan means nuclear waste would travel in heavy-haul trucks in places where railways end. This represents a whole other set of dangers, Kamps said.

The Michigan maps show trucking routes from two nuclear power plants- Palisades that is operating in Southwest Michigan and Big Rock Point, a closed plant near the tip of the Lower Peninsula. 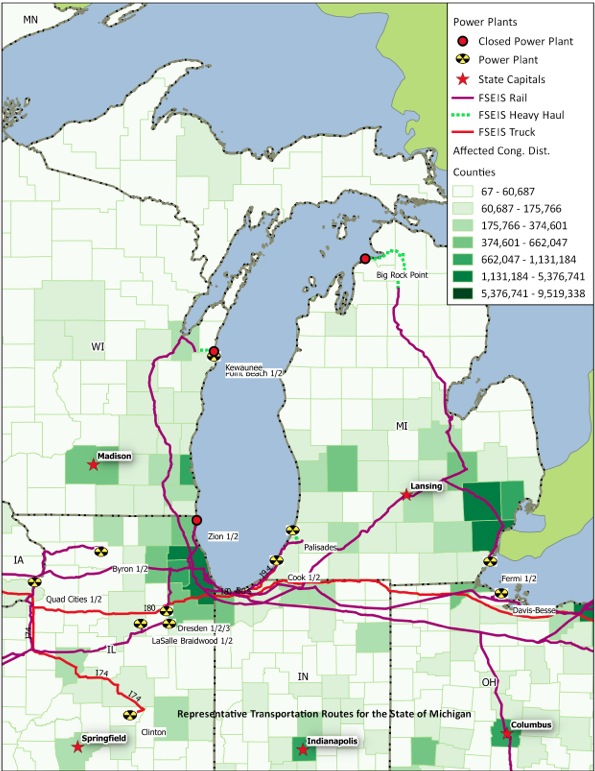 Indiana, Ohio, Pennsylvania and Illinois would also be required to ship waste by heavy-haul trucks.

These trucks must travel up to 30 miles at 3 mph, Kamps said. The catch is that because of their size, the trucks can’ turn. One concern is the risk of breaking wheel axles.

“If these trucks had to stop for any reason during travel, there’s the risk of radioactive exposure to people nearby,” Kamps said.

That’s not true, Singer said. The waste would be in a secure enough cask for such issues to never happen.

But for now, what Kamp calls “mobile Chernobyl” and “Fukushima freeways” remain on hold. The Obama administration suspended the budget for the Yucca Mountain repository project. In addition, the administration denied the Nuclear Regulatory Commission and Department of Energy budget request to further review the site.

“The administration made our position clear–Yucca Mountain is not a workable solution,” said Bart Jackson, an Energy Department public affairs official. “The administration supports working with Congress to develop a process that is transparent, adaptive and technically sound.”

But the tides might change with next year’s presidential election.

Singer said he hopes the proposal will be renewed by a new administration since no “showstoppers” have successfully shown potential dangers.

Anti-nuclear groups created the maps to make the public aware of the plan’s health and safety risks, Kamps said. But the only way to achieve the protection of public health is by keeping waste in dry and secure places, not simply shipping it for other states to deal with, he said.

For Singer, the safest place is Yucca. Its arid nature makes it the most effective place for storage, he said.

The national maps can be found here.