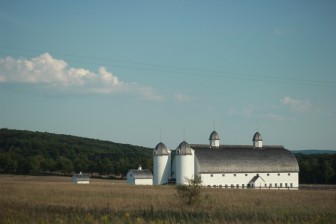 Michigan farms like this one are having trouble finding seasonal workers because migrant workers are more interested in permanent positions.

The fall farming season in West Michigan has ended, but the future need for migrant workers remains.

The Michigan Farm Bureau said migrant workers fill about 40,000 seasonal jobs on fruit and vegetable farms but the number is decreasing.

Migrant workers are starting to see education and a permanent job as necessary, leading them away from temporary jobs that depend on time and place, Craig Anderson, manager of agricultural labor and safety services at the Farm Bureau said.
“When you look at the jobs that agriculture has available, they’re unfortunately based on climates. Those three-to-six-week jobs are the types we are having a very difficult time filling,” Anderson said.

Additionally, Anderson said the ease of migrant movement throughout the country is not what it once was. The migratory stream used to start in Louisiana and weave through other states, flowing throughout the year depending on needs in different production areas.

Migrant workers could follow that trail to Michigan and then continue on their way elsewhere.

Now, Anderson said, using seasonal labor for crops is limited to states where it’s most efficient.

As an example, he used the once-fruitful apple orchard production in Illinois. The migrants flowed through the state on their path. But now that West Michigan is the most cost-efficient area for growing apples, the orchards and work in Illinois are declining significantly. That leaves out a step in the pathway for migrant workers to reach the next state.

Ken Silfven, the communications director at the Michigan Talent Investment Agency, said the agency activated its Agricultural Recruitment System, which looks for workers from across the country, for the first time in 15 years.

More than 15 employers used it a year after its implementation to promote job opportunities in Michigan.

Silfven said his agency is moving its agricultural employment services department to the local level, partnering with Michigan Works! agencies. Due to chronic federal underfunding, Silfven said that relying on Michigan Works! is the best option for finding specific resources for farmers. Still, the most effective recruiters are workers themselves, he said.

“Frankly, word of mouth is the best recruitment tool. If an employer can guarantee work and provide good working conditions, that reflects well on both the employer and the state,” Silfven said. “That means word will spread within the seasonal worker community and agricultural laborers will be more likely to come to Michigan.”

However, if living and working conditions aren’t good, word of mouth will have the opposite effect.

RubÃ©n Martinez, the director of the Julian Samora Research Institute Latino research center at Michigan State University, said workers go where the jobs are and where they know they’ll be treated well.

With the reduced availability of migrant workers, more farmers are using the H-2A work visa that’s designed to fill agriculture positions. Recruitment agencies for farms bring immigrants with visas into the United States then distribute them to jobs, returning them to their home countries after the season ends.

Martinez said employers may see the H-2A program as providing a more reliable stream of workers, but an anti-government and competitive business culture makes overseeing programs like it more difficult for the U.S. Department of Labor.

“Deregulation and privatization has reduced the capacity of the Department of Labor to be able to monitor the H-2A program and ensure that workers being brought in are being paid fairly and provided housing and treated with respect and dignity,” Martinez said.

The Farm Bureau’s Anderson said his group works with its members to ensure they understand agricultural safety and environmental regulations. The most difficult piece is fully understanding the rules.

“We are covered by a wide range of rules that are not common and that apply only to a narrow segment of the agricultural community, and that can make it difficult for an operation to determine what it is they are supposed to be doing. So finding that and getting that information out is a very significant task,” Anderson said.

According to Cornell University Cooperative Extension, an estimate of 1 million to 3 million people constitute the migrant workforce in the United States, and about half of those workers are not citizens.

“Issues regarding immigration enforcement have created a chilly climate in which migrants are less willing to travel, particularly if they learn there are immigration raids being conducted,” Martinez said.

“They come here and they don’t have contacts or ties to other places or people, so basically they’re at the whim of those contractors that brought them and the employers that have them,” he added.

This story was produced by Capital News Service.