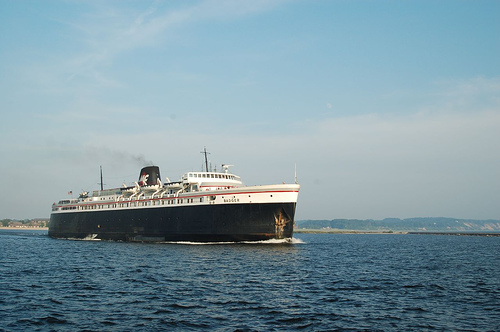 Researchers calculated the costs of converting the S.S. Badger, a Lake Michigan car ferry, to be powered by liquid natural gas. Image: Noah Coffey via flickr

Great Lakes shipping has the potential to go green.

Liquefied Natural Gas (LNG) could replace oil as the fuel of choice for the freshwater ships, according to a study published recently by the Transportation Research Board. But conversion costs, declining fuel prices, processing capacity are barriers.

LNG is methane stored at a lower temperature for transportation, said Carol Wolosz, an author of the study and the executive director of the Great Lakes Maritime Research Institute. Cold methane becomes liquid, making it easier to transport because it takes up less room than the gas.

That makes it an ideal fuel for maritime use.

And it is significantly better for the environment than the most commonly used freighter fuel – liquid petroleum, the study says.  Converting to LNG can cut the emissions linked to global warming almost in half.

LNG is better for the planet and goes beyond meeting minimum environmental standards for powering ships, the study reports.

The fuel source would also be better for the economy, the study said. Better performance and lower operating costs offsets the high cost of conversion.  And as some Great Lakes vessels last up to 80 years, those costs are spread across a long period.

Another benefit:  New jobs would be created to build and run liquefaction plants and to convert the ships.

To examine the feasibility of conversion, the researchers studied the S.S. Badger, a coal-burning ferry that runs across Lake Michigan.

“It was a good platform for us to take a look at and model,” Wolosz said. “We used it for looking at things like regulatory issues, environmental issues, emissions, supply chain issues, engineering issues and issues with tank placement and how you would modify and convert an existing vessel to using a new fuel type.”

The Environmental Protection Agency had scrutinized the Badger for dumping coal ash into Lake Michigan and for the emissions released when burning coal. This made it a good model for comparing fuel emissions.

Converting the ferry is technologically feasible, said co-author Richard Stewart, a professor of transportation and logistics management at the University of Wisconsin-Superior.

Researchers found that converting the SS Badger to LNG would cost around $13.7 million, but reduce annual fuel costs by $53,000. The fuel savings would not cover the conversion cost in a timely manner, but the study said the project would have merit because it would reduce the ship’s environmental impact.

A major obstacle is getting those who operate Great Lakes vessels on board. 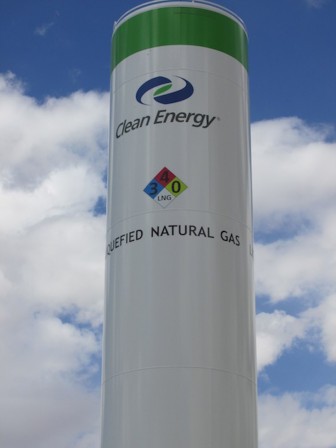 Carriers will have difficulty financing conversions if monetary benefits are unclear, the researchers said. Regulations push ships to become more environmental, but LNG was not developed before the regulations were in place.

“The problem is now we are investing in other technologies to meet compliance regulations that were imposed by the government, and that is taking capital which will make LNG adoption more difficult in the future,” said Mark Barker, the president of Interlake Steamship Co. in Ohio.

Shipowners would be more likely to invest if they weren’t required to meet environmental standards before LNG infrastructure could be developed, he said.

They are also less likely to support a conversion that isn’t immediately cost effective, and the dropping price of diesel fuel curbs eagerness to convert to LNG.

“As the price of fuel that they currently use is cut in half, the economic incentive to make the change may not be there,” Stewart said. “They have to have a reasonable return on investment and be able to pay for this cost of capital.”

The lack of regulation of LNG as a maritime fuel also increases uncertainty for early adopters, the study said.

“At every different level of maritime operations, there are multiple agencies that handle regulations and a lot of this is not in place because it is a new fuel for use,” Wolosz said. New regulations would need to be implemented before the fuel could be used by ships.

The biggest obstacle is conversion. LNG takes up three or four times as much space as petroleum.  Ships would have to be modified to handle the extra load.

Another problem: LNG has to be refilled every three or four days. The ships could be delayed if fueling is not permitted while loading and unloading, the researchers said.

And even if the fleet is converted, there are no LNG fuel ports in the Great Lake region now.

“The natural gas supply chain in the Great Lakes region for all modes of transportation is in its infancy and cannot yet supply a major fleet transition to natural gas,” the study reported.

More liquefaction plants to cool the methane would have to be built, a distribution system developed, equipment updated and workforces trained, the study said.

Despite the obstacles, LNG-powered ships are worth pursuing because of environmental and productivity benefits, the researchers said. But more studies are needed.

Other industries could fuel demand

Rail, highway, mining, and agriculture industries are also interested in using LNG. That’s important because demand is needed to justify the expense of the liquefaction plants.

“These liquefaction facilities are designed to run at a certain capacity, which is a fair bit of LNG – hundreds of thousands of gallons of LNG,” said Interlake Steamship’s Barker. Other industries would have to buy the excess LNG to make liquefaction plants economical.

“Eventually it may get adopted as a fuel type going forward, but we need to find ways that we can have LNG supply that’s supporting more than just the shipping. It has to be supported across multiple uses in the industry,” said Barker.

“Significant capital investments, long-term contracts with users, and public acceptance of the liquefaction or compressing facilities and the supply chain” are crucial, the study said. Loans, grants, and tax incentives are needed to support conversion.