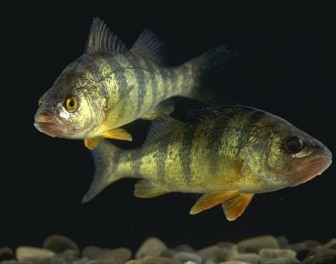 Some fish may find that short, warm winters are not fun in the sun, according to a recent study of Lake Erie perch.

In fact, climate change may cause more harm to certain fish than researchers once thought.

Fish living in mild-temperature regions benefit from some aspects of climate change, such as more water flowing through rivers. But the negative impacts outweigh the positive ones, according to the study “Short Winters Threaten Temperate Fish Populations” published in Nature Communications last July.

The study looked at how shorter and warmer winters impact yellow perch, but it also could have implications for other early spring spawning fish.

“Culturally, and from a heritage standpoint, fish and fishing are extremely important,” said Jeff Tyson, the Ohio Division of Wildlife’s Lake Erie fish management program administrator. Individual livelihoods directly depend on it.

Perch are ecologically and economically important throughout the United States and support valuable commercial and recreational fisheries in the Great Lakes region, the study said.  That makes the climate change research especially important.

Researchers made  laboratory conditions as close to the environment of Lake Erie as possible.

Unlike earlier studies, they used only wild fish, said Troy Farmer, a postdoctoral fellow at Auburn University and the author of the publication.

“We thought the results would be much more relevant to the natural population of Lake Erie using wild fish,” Farmer said.

But that meant that Farmer and his advisers, Elizabeth Marschall and Stuart Ludsin of Ohio State University, had an additional challenge.

“There was definitely about a two-year learning curve where we had to figure out how to collect them, how to keep them alive,” Farmer said.  “Once we figured out that, we were able to do the experiment.” 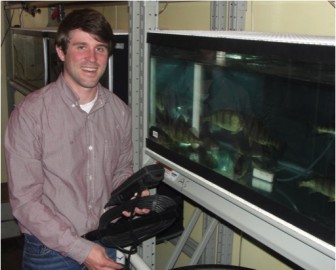 They used bottom trawling to capture the fish that were then transported to the Aquatic Ecology Laboratory at Ohio State University.

The fish were kept in environment-controlled chambers from October of 2011 through June of 2012, during which the researchers studied their reproductive behavior.

Temperatures recorded during a previous short winter in Lake Erie was used to see what happened to the fish.

The results were not positive, the study shows.  Shorter and warmer winters cause yellow perch to produce smaller eggs which in turn yield smaller larvae. Not only were the eggs smaller, fewer of them made it to the next stage of life.

And even for the larvae that survived, the shorter winter could mean they hatch at the wrong time, when food is more scarce.  This lowers the survival rate even more, the study found.

The study shows that if fish can’t adapt to the changing climate, they die.

More research is needed to see if they can adapt quickly enough to avoid that, according to the study.

Other warm-water fish may also be unable to adapt.

A drop in fish population could have far reaching consequences in the Great Lakes.

“The estimates are that the Great Lakes fisheries are worth $7 billion annually to our regional economy,” said Matt Herbert, an aquatic ecologist with the Michigan chapter of the Nature Conservancy.

People who fish recreationally could also be affected by climate change reducing perch population. If the yellow perch population suffers,” habitats might shift so that those fish are no longer available in that part of the region,” Herbert said.

Their loss could harm the health of the entire food web, he said.

Farmer is interested in using  climate data to predict how perch will be affected. Doing so is complicated.

“Warmer winter temperatures may have a negative effect, but it’s not as if this is the only factor affecting Lake Erie yellow perch,” Farmer said.

Other climate-sensitive factors such as algal blooms and loss of oxygen in Lake Erie’s central basin also harm yellow perch.

Researchers need to study how the “ecosystem is changing as a whole, and how that might affect fish populations,” Farmer said.

The field is a promising one and studies are being conducted more and more frequently.

“Where we’re headed, we’ll really get a full picture of what climate change holds for Lake Erie yellow perch,” he said.