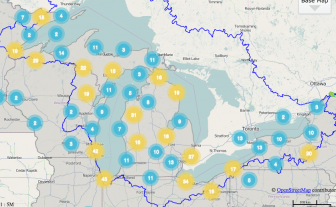 A new online widget shows with just a couple of clicks how $290 million in federal funds for improving the Great Lakes ecosystem has been spent.

The Great Lakes Restoration Database let’s people know “what’s going on in their backyards” with land and water protection, said Heather Braun, a project manager with the Great Lakes Commission, which developed the site. The online system tracks the progress of more than 600 restoration projects.

“We’ve found there was really no way to showcase the work of habitat restoration to the public,” Braun said. “Our system was created to be intuitive and very user-friendly to demonstrate the work.”

The projects are associated with the Great Lakes Restoration Initiative. The initiative allocates federal funds to eliminate the biggest threats to the Great Lakes ecosystem. Such threats are as diverse as invasive species, contamination cleanups and excessive nutrient run-off.

The system has a keyword search bar, maps and clickable icons that represent each restoration project, Braun said. When users click these icons, they receive information about the funding and status of each project and the contact information of the recipient organizations.

From invasive species control to fish barrier removal, the projects have protected thousands of acres of wildlife and fisheries, Tim Eder, the executive director of the Great Lakes Commission, said in a news release.

The restoration projects began five years ago when the Great Lakes Interagency Task Force worked to solve degradation of Great Lakes health. Focus areas include such threats as Asian carp and algae growth.

The Government Accountability Office reports that the $1.68 billion invested in Great Lakes restoration across eight states in the region, Cameron Davis, a senior adviser for the Environmental Protection Agency, wrote in a recent column about the initiative.

That means helping protect an estimated $50 billion in economic revenue that the Great Lakes are responsible for producing annually, Eder said. “This is a valuable investment in our region’s economic prosperity.”

He noted the importance of the region’s hunting, fishing, wildlife-watching and recreational boating activity.

It’s important for constituents to be able to show their elected leaders that tax dollars are working to protect habitat and the economy, Braun said. That’s why the database features a tool that separates the map into Congressional districts. The hope is to get the public eager to learn and spread the information.

“We’re really excited about this project,” Braun said. “It’s our way of demonstrating the impressive work of these organizations to the public.”

Editors note: This story was updated 9/21 to accurately reflect the value and number of the projects in the database.