Editors note: This is the second of a two-part story about Rod Coronado, a convicted eco-terrorist now working to protect wolves in the Great Lakes region. Part 1 of the story is here.

One of the Great Lakes Wolf patrol’s first actions after it was established in 2013 was photographing a wolf killed in Michigan and posting the pictures on its website to inspire others to take up the cause.

The group has since established chapters in Michigan, Wisconsin and Minnesota. And founder Rod Coronado also organized a patrol in Montana to oppose hunting wolves as they exit the protection of Yellowstone National Park. In each location, the group sticks to public lands and roads, and avoids infringing on hunters under the guidelines of hunter harassment laws, Coronado said. 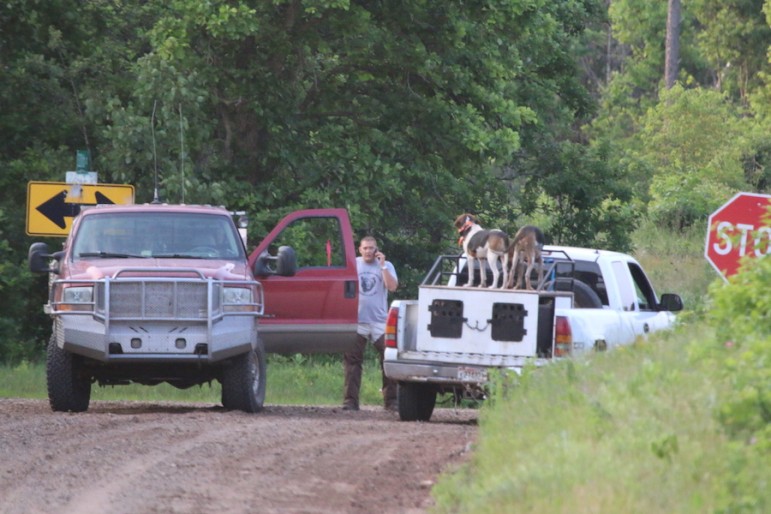 But as recently as Wednesday, sheriff’s deputies in Polk County, Wisconsin, told patrol members they would be cited for hunter harassment for following and filming bear hunters and their hounds, Coronado said.

Since July 4th, the group has been monitoring hunters training bear hounds and baiting bears, he said. The group believes baiting bears results in more deadly conflicts between hunting hounds and wolves that defend the bait piles.

“We’ve documented a lot of wolf tracks where bear baits are, so we’re setting up trail cameras to prove to the DNR and the public that wolves are becoming habituated at bait sites,” Coronado told Great Lakes Echo Thursday.

The deputies said they could not issue the citation because their computers were down and that the group should go to a county clerk’s office to receive it, Coronado said. They did so on Thursday, but there was no report of a citation.

Polk County deputies could not be reached for comment. A video of the incident provided by Coronado is below:

In Wisconsin, three hunting seasons were held before wolves were reinstated as endangered in the Great Lakes last December. In those three years, more than 500 wolves were killed by hunters, according to the Wisconsin DNR.

Wisconsin became the group’s main focus because quotas were high and state regulations allowed some methods not authorized in other states, like using hunting dogs and foothold traps, Coronado said.

In the 2012-13 season, wolves killed seven hunting dogs, according to the Wisconsin DNR. This animal-on-animal violence raised ethical concerns for the group.

The patrol notified the DNR that it was installing trail cameras near traps to photograph restrained wolves. It wanted the agency to be aware of its legal presence in the field, Coronado said. Members also followed hunters, documenting interactions and posting them on the group’s YouTube channel.

After the hunting seasons ended, the group searched fields for traps left illegally.

Documenting an evolution in activism

The group’s activities in Montana and Wisconsin were documented last year by filmmaker Joe Brown, a professor at Marquette University in Milwaukee. Brown was interested in exploring wolf hunting controversies in the Midwest and thought Coronado would make an interesting central character for his documentary.

Brown will continue to film and edit the documentary about Coronado’s patrols over the next few years, joining the patrol in the field for another season. He plans to interview prominent activists and close acquaintances from Coronado’s past. Some of the early footage is below:

“One of the things that really stands out to me is that he never compromises his beliefs and he has never given up on defending wildlife despite going to prison, despite all these actions that some people might look at and claim weren’t that effective,” Brown said.

Coronado proved a difficult subject to keep up with, rising at 4 a.m. and driving 500 to 600 miles daily, monitoring hunters even after nightfall, Brown said.

“The guy keeps going and he doesn’t really stop for days on end,” said Brown. “It is pretty amazing.”

Since the federal protection of wolves was reinstated last December, the group continues to monitor hunting of all apex predators for illegal activities. Members make observations on the ground and also screen hunters’ social media accounts for threats to wolves.

The group hopes to prevent poaching by setting up stuffed wolves and using trail cams to document hunters who shoot at them, Coronado said.

The wolf patrol welcomes reports from people noting suspicious or illegal activities from hunters and relays those concerns to the DNR. By putting more eyes in the field, the group hopes that hunters will be more mindful of the law, Coronado said.

“We operated all last year in the field and we never once saw a game warden in the field,” Coronado said. “I think (hunters) are used to that same thing too, and it encourages an attitude of indifference and that they can get away with anything.”

In addition to monitoring hunting, the group encourages attendance at DNR meetings and active involvement in changing wildlife policies. Most public input comes from those who buy hunting licenses, and therefore policies cater to them rather than to the non-hunting public, Coronado said.

A search for respect 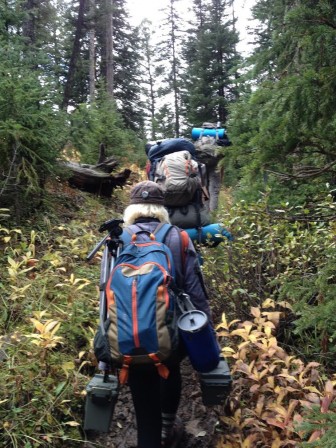 Members treat hunters and trappers with respect, Coronado said, avoiding profane language, verbal threats and yelling. Hunters have even arranged one-on-one meetings with the wolf advocate to discuss their differing viewpoints, he said.

“I went through the time in my life as an activist where I just vilified everybody who did experimentation on animals, who was a fur farmer, who was a trapper,” Coronado said. “The work that I do now puts me in direct communication with these people and they are not horrible people and they are the people we need to work with.”

Nonetheless, some hunters consider the group’s activities as harassment, said Nick Pinizzotto, president and chief executive officer of the U.S. Sportsmen’s Alliance, based in Columbus, Ohio.

“People shouldn’t have to be worried or looking over their shoulders if somebody is out there just observing and watching what they are doing, because that alone makes people uncomfortable and it is indeed harassing with the hunt,” said Pinizzotto.

While Coronado tries to talk to and cooperate with hunters, the activist says the patrol will not “water down its mission.”

“We want people to be a part of this, but we want them to know that we are 100 percent opposed to all recreational hunting and trapping of wolves. We are not going to sign off on any agreement that sees wolves being killed legally.”

The group faces challenges in changing the perception of wildlife defenders as eco-terrorists.

It isn’t qualified like state game wardens to monitor hunts, Pinizzotto said. Wildlife management agencies have the science and expertise to make appropriate hunting regulations, and those should be respected, he said. 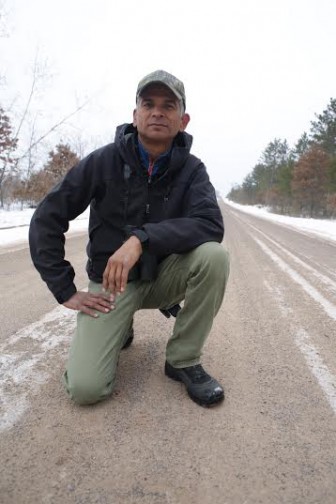 “We love wolves,” Pinizzotto said. “They are among the most beautiful animals we have in North America. But the reality is if left unmanaged, they can have very negative impacts on everything else that is out there because they are such efficient hunters and that is why they have to be managed.

But some people allow patrol members to stay overnight in their houses and have donated food, radios and other supplies to them. Coronado has raised more than $6,000 in the past year on the group’s Go Fund Me page.

When Brown previewed his documentary at the Great Lakes Environmental Film Festival in Milwaukee in May, many viewers didn’t understand the hatred toward or desire to hunt wolves, he said. They were unaware of the practice of hunting wolves with hounds before seeing the documentary and became concerned with what some considered “state-sanctioned dog fighting,” he said.

A mixed reception among wolf advocates

Even among wolf advocates, Coronado receives a mixed reception. Some are leery to align themselves with him because of his extremist past, he said. 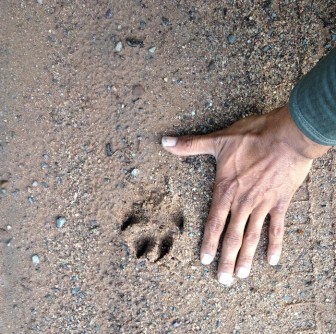 But others say he isn’t extreme enough, upset by the fact that he’s no longer a vegan, aligns himself with hunters and films trapped animals rather than setting them free.

Unfazed by the opposition, Coronado returned to the field following the July 1 opening of Wisconsin hunting hound training to continue to advocate for a change in public policy in a law-abiding way.

“ And I want to see hunters in our ranks.”

3 thoughts on “The dawn of the Great Lakes Wolf Patrol”