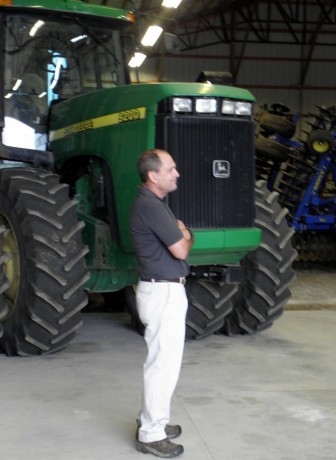 Kris Swartz operates Swartz farms in Wood County and is the local Soil and Water Conservation District supervisor. The district will disperse and monitor funding for nutrient reduction under a new USDA program for western Lake Erie. Image: Karen Schaefer

After June’s record-breaking rain, communities in western Lake Erie are bracing for another bad year for algae blooms.  But help is on the way.  A new federally-funded, tri-state initiative to help farmers reduce fertilizer run-off is ready to take the battle against algae to a new level.

KRIS SWARTZ:  We got 4-point-5 inches, something like that, over the weekend here.

SCHAEFER: That’s 4.5-inches of rain. This spring, the rain in western Ohio has been relentless, nearly four inches above normal for June.  On his Wood County farm near Perrysburg just south of Toledo, Kris Swartz gazes out over fields where the yellowing tops of corn stalks are barely visible above sheets of standing water.  It’s a daunting sight, but Swartz has reason for optimism.  Standing with him in his equipment shed to escape the rain are about fifty new partners from three states.

SWARTZ: It’s encouraging to me that we can have cooperation across political, and geographical, and governmental boundaries. 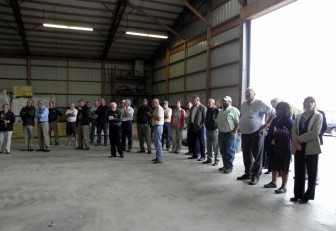 SCHAEFER: Swartz is referring to a new joint venture between Ohio, Michigan and Indiana slated to ramp up the fight against Lake Erie algae – the Tri-State Western Lake Erie Regional Conservation Partnership Program.  The biggest weapon in the program’s arsenal is a 5-year, $17.5 million grant from the U.S. Department of Agriculture.  It will pay farmers to try new land management practices that reduce will phosphorus run-off from the western Lake Erie basin.

TERRY COSBY:  The things that we’re already doing, they are working.  But we need them more on a bigger scale. 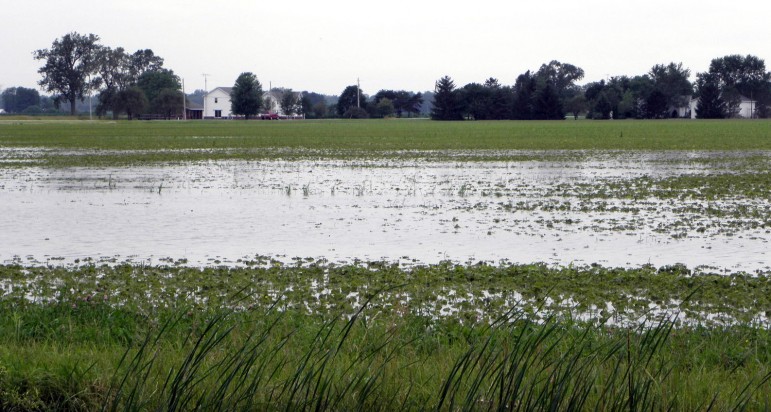 COSBY: They all work together, in conjunction, so we don’t want to see you just do one.  So if you’re going out and do no-till or do conservation tillage, cover crop, controlled drainage — we want to see all of those things on the same field.

SCHAEFER:  Ohio, with the largest acreage in the basin, will get about 12.25-Million dollars,  Michigan about $3.35 million, and Indiana $2.1 million. Farmers can start applying now for  incentives that pay 75 to 90-percent of the cost for pilot projects. Wood County farmer Greg Lake says that money will be especially welcome this summer, for planting now-sodden acres in cover crops to keep nutrients in place. 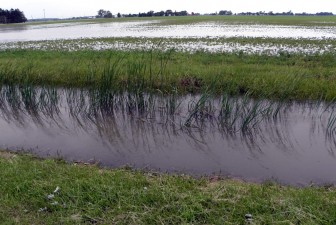 LAKE: A lot of farmers are asking what are we going to do with these open acres, so now knowing there’s some programs — especially with commodity prices as low as they are right now, this is not going to be a banner year for farmers.

SCHAEFER:  It may not be banner year for Lake Erie, either. Recent algae forecasts predict blooms to rival those that shut down Toledo’s drinking water last year. But Steve Shine, who manages conservation programs at the Michigan Department of Agriculture, is looking ahead.

SHINE: It’ll take time to restore Lake Erie’s water quality. We all know that.  It didn’t happen overnight, it’s not going to get it fixed overnight.  But we have the right team in place to get it done.  And a little rivalry is a good thing among the three states. And we are up to the challenge.

SCHAEFER: Michigan has recently re-authorized funding for its nutrient conservation program through 2021.  Indiana has committed to work with farmers to curb nutrient run-off in 9-counties along the Maumee River.  If the program meets it Lake Erie protection goals, the USDA may consider another round of funding in five years.  For Great Lakes Echo, I’m Karen Schaefer.