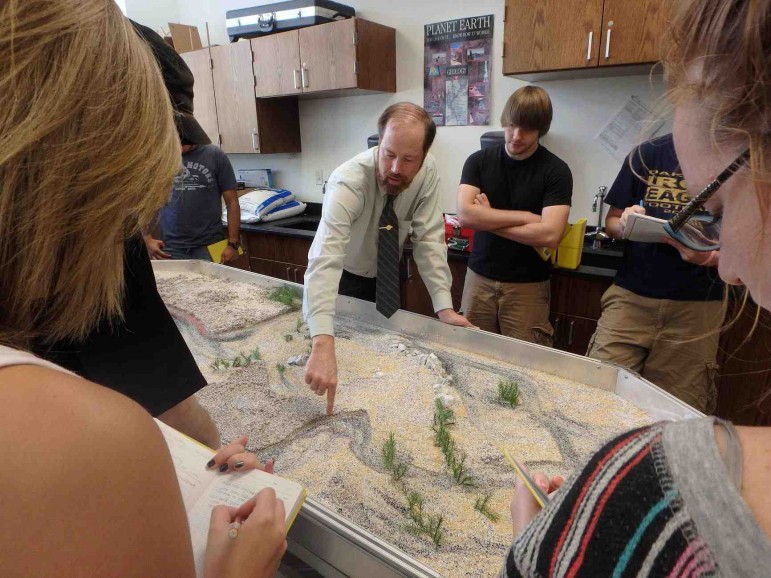 But they are a part of a course at Ball State University that combines students in journalism and telecommunications with those majoring in geology, natural resources and environmental management to research and report on water quality.

“We’re trying to create solutions to that complex problem, and then articulate that to the public — what it is, why it matters, why it’s important and then, what can be done about it,” said Adam Kuban, an assistant journalism professor who co-teaches the course. 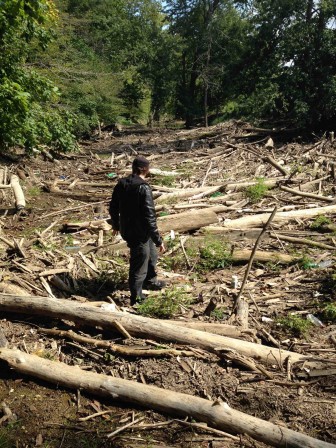 Kuban, who’s taught about four years at the Muncie, Indiana university, pioneered the course in 2013 with Lee Florea, an assistant professor of geological sciences. In the fall of 2013, the first iteration measured water sediment in the White River.

Students in last fall’s version of the course examined the effects of logjams in the nearby Mississinewa River. Their work resulted in $100,000 awarded this spring to remove the obstructions.

And a handful of the students discussed their research and findings at science conventions as far away as Chattanooga,Tennessee.

The 14 students endured mile-long hikes through cornfields, foot-deep mud and hordes of mosquitoes.

They documented the size, composition and changes in nutrient levels of water analyzed before and after each of eight logjams chosen for research.

“The idea was public understanding of science and seeing the bigger picture,” Kuban said. “Everybody lives downstream of somebody else.”

“We want to push that idea of a connection, and help people understand that they don’t need to be a scientist to understand water quality.” 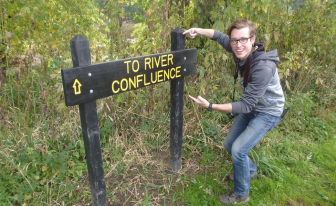 Logjams can create areas of stagnant water where bacteria thrive and large amounts of algae upset water nutrient balances. They also collect garbage and other hazardous materials that float down the river, which can accumulate and turn a small logjam into a much larger problem.

Some logjams the class investigated spanned more than the length of two football fields.

“The first log jam we actually went out to ended up being about a quarter of a mile or half of a mile long, and just had a ton of trash and everything, so it was extremely smelly,” said photojournalism major Rick Purstha. “It was really an eye opener. The majority of the people who hear the word logjam just think of, you know, branches, or maybe a tree or two in the water, and when we got there, it was just so massive that we didn’t know how to handle it.”

Sometimes the students literally immersed themselves in their topic.

Map of logjams in the Mississinewa River. Image: waterqualityin.com

Once a student lost his footing and fell into a shallow pool in the middle of the fallen trees, garbage and other debris, Kuban said.

“It was probably about up to his waist, and the poor guy was wearing, like, khaki shorts. He had his phone in his pocket. Once I made sure he was okay and wasn’t hurt, it was kind of funny.

“And I asked him … ‘what does it feel like in there, what did it feel like stepping around in that swampiness?’ And he said that it felt like pudding with rocks,” Kuban said.

“It’s supposed to be a river.”

While the class only met weekly, students put in multiple hours outside the classroom getting early morning water samples. One weekend, they visited multiple Mississinewa river confluences — a trip Kuban said took nearly 800 miles and two days to complete. They spent additional time in the lab testing water samples.

The class cemented his decision to add an environmental studies minor to his academic load.

“I really loved it because I got the chance to go out and work and do this every single day,” he said. “It was really an eye opener for me, because as a journalist, I never thought I’d have to understand what total suspended solids are or what’s causing a logjam. Actually having to go out there and do that all ourselves really gave me a different perspective of how I’m going to have to understand things when I get out into my career field.”

Dylan Hayes, a natural resources and environmental management major, became the 2014 course’s teaching assistant after he took it the previous year. Working with journalism students gave him new ideas to consider during his current internship at Tip of the Mitt Watershed Council, in Petoskey, Michigan, he said.

“I got to interact a lot more with the public and see things from the perspective of an average person in a city or town, and how science can sometimes be confusing in the terms that scientists use,” said Hayes, who has since graduated. “It’s good to know that journalists are there to reinterpret information so everyone can understand it.” 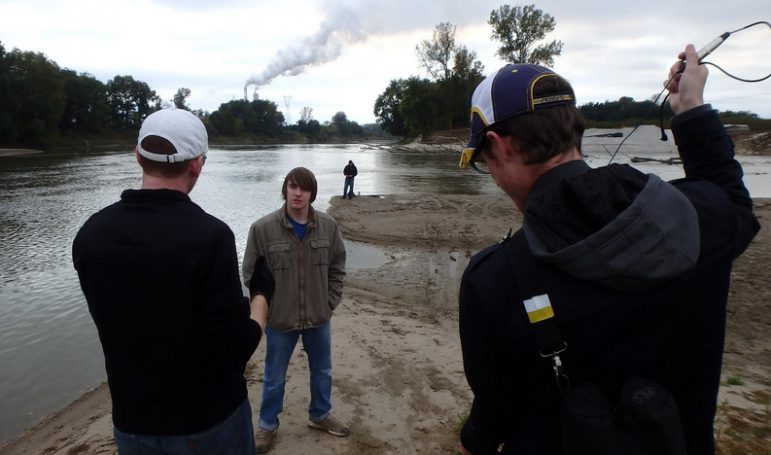 FlatLand worked with some of the state’s Soil and Water Conservation Districts to submit the grant in January.

The grant proposal served as a good way to finish the semester, Kuban said.

“It made for a good assignment, kind of like a final exam,” Kuban said. “They collected all this data, they did all this investigation and exploration, and we put all of their content into a draft of this grant in December. So, we had some time to polish it before we submitted it in January.

Their work paid off. This spring, the Indiana Department of Natural Resources approved the grant and awarded $80,000 for the removal of the three largest, more problematic Mississinewa logjams. An additional $20,000 for the project was donated locally.

Purstha heard the news of the grant’s approval during a shift at his summer job at an AMC movie theater.

“Adam texted me and told me we had gotten the money,” he said. “And I just kind-of, like, yelled ‘YES!’ at work and everybody just stood there and stared at me.”

Purstha and some of his classmates spoke about the research at multiple scientific conventions, including a Geological Society of America Conference in March.

“It was pretty intimidating at first,” he said. “We probably put in about two months of preparing for it before we actually went, but I never realized how nerve-wracking it would actually be. But you know, it’s another one of those big things I’ll be able to say that I’ve done.”

Purstha still keeps in touch with many of his classmates and professors.

“You weren’t really expecting to get close with your professor or even your classmates, but the type of class it was, Adam and Lee were down in the trenches with us while we were working on the project.They went with us to the river to work on these logjams (and) they were in the lab sometimes helping us get through some stuff,” Purstha said. “I don’t think I’ve ever gotten closer to a professor than during that class.”

Kuban and Florea recently submitted a $600,000 grant proposal to the National Science Foundation to expand the course beyond Ball State. Kuban hopes to get other Indiana universities involved — and potentially those in other, nearby states — in creating a collection of students and universities working together on an overarching water quality subject.

“It’s meant to start here and then branch out to the region, and then hopefully beyond state borders if we are ultimately able to develop in a way the NSF grant would allow us,” he said.