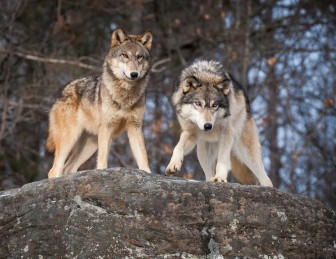 Grey wolves (Canis lupus), can maintain an average territory of about 40 to 50 square miles. Image: Flickr.

Don’t let a wolf pack rendezvous in your yard too often. When it comes to a tug-of-war for their favorite meeting site, they will win.

University of Wisconsin researchers have found that the rendezvous sites that a pack establishes in the spring are tenaciously maintained. These sites are where weaned pups are moved after leaving the den. And once there, the wolves don’t want to leave.

The study, published last fall in the Human-Wildlife Interactions Journal, was conducted by Christine Anhalt for her masters thesis at the University of Wisconsin-Madison. The goal of the study was to see how easy it is to move wolves from their established rendezvous sites, said Adrian Wydeven, a recently retired wolf biologist for Wisconsin’s Department of Natural Resources who helped with the study.

And understanding that question could help wildlife officials better manage this animal.

“Wolf movement is concentrated around rendezvous sites,” said Anhalt, which makes for a “rigorous test of the deterrents to see if they really work.”

Biofences are natural deterrents that attempt to make wildlife move. They can be useful tools for the management of wolves and other large predators. In areas where wolves and humans coexist, there is often conflict, the study said.

Wolves occasionally make a meal out of livestock or hunting dogs, and humans sometimes encroach onto a wolf pack’s territory.

Like most canines, grey wolves naturally avoid conflict with each other by establishing their territory with scent-marking and howling, said Wydeven, the retired wildlife biologist. Researchers included measures that would naturally encourage pack movement using the same social territory pressure that comes with humans and other wolves moving into the area.

The chosen biofences: wolf scent marks and playing a recording of a foreign wolf pack. These methods were tested on three packs of grey wolves in Wisconsin. By walking through the territory of another three Wisconsin packs, they could control for the effect of human presence to make sure that they didn’t play a role in the test packs.

It turns out that it takes more than the simulation of a fake wolf pack presence to make a real one move.

In response to the recording of the foreign wolves, the Wisconsin wolves would occasionally howl back and slightly increase the marking of their territory, but otherwise did not change the use of their territory. However, human activity at the sites may have had an effect on wolf movement, the study said.

“When it comes down to it, it’s a matter of timing,” said Wydeven. Wolves are “tenacious at maintaining and holding onto rendezvous sites, especially early in the season.”

The study suggests that the wolves’ tenacity may be because of the benefits of offspring protection and resource abundance that comes with staying near the rendezvous sites.

There are other deterrents and non-lethal methods to mitigate conflicts with wolves.

‘Flagging’ and ‘crackers’ are two of the most common methods of scaring wolves from livestock in Michigan’s Upper Peninsula, said Ed Golder, the Michigan Department of Natural Resources public information officer. Flagging is the use of bright and colorful strips of cloth on the electric fences of livestock pens. Crackers are any device that makes loud noises that will keep away wolves and other animals with good hearing.

Non-continuous use of these scare-methods is most effective, according to a Michigan DNR brochure.

“People can howl, too,” said Wydeven. It can work as a reminder to the wolves nearby that the territory is occupied by humans. However, it could also challenge the wolves if the area is well established by them, he said.

The study stresses the importance of consideration of wolf rendezvous sites in future wolf management plans, and suggests that further investigation of biofences could be more efficient tools to reduce human-wolf conflict.

3 thoughts on “Study looks at biofences for managing wolves”