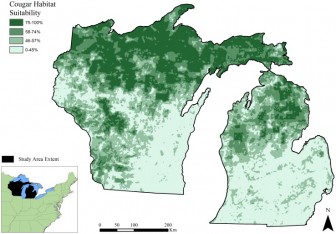 Don’t call it a comeback. Call it a potential comeback.

Habitat is suitable for cougars to recolonize the Upper Great Lakes region, according to a study out of Michigan Technological University.

The study, published last November in the Public Library of Science, says that cougars were driven out of the Midwest by the early 20th century. Since then, they have persisted only in the West.

But the western population has been increasing, causing the cats to expand to the east, the study reports.

This population increase is likely due to more prey availability and the banning of predator bounties and poisoning in the 1960s and 1970s, said one of the study’s authors,  Shawn O’Neil, a doctoral student at Michigan Technological University who studies wildlife spatial ecology. 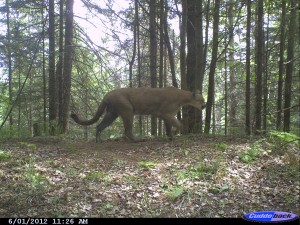 “For the most part, as a society, we’ve moved from trying to control and eradicate apex predators to trying to coexist,” O’Neil said.

O’Neil also credits the expansion to the animals’ instinct to avoid inbreeding. They will disperse long distances in search of suitable habitat and new gene pools, he said. One cougar was even thought to have traveled over 1,000 miles from South Dakota to Connecticut, said the study.

O’Neil and his colleagues demonstrated that suitable cougar habitat exists in the Upper Great Lakes by assessing the region’s capacity to support them. That capacity includes food availability and physical characteristics of the landscape. Among those characteristics are elevation, vegetation, distance to water and roads and if they can avoid people.

The study area focused on Michigan and Wisconsin, and extended a model previously developed by researchers at the Cougar Network, a nonprofit organization that studies the species. After comparing results with sightings confirmed by both states’ Department of Natural Resources, O’Neil and his colleagues estimated that more than 500 cougars could be supported in the study area.

That may sound good for cougars, but if recolonization does happen it will undoubtedly bring political and cultural problems similar to that of the wolf, said Adrian Wydeven, a retired wildlife specialist from the Wisconsin DNR.

Wydeven has long studied cougars and other large carnivores. He was involved with investigating the Connecticut cougar that reportedly traveled so far.

He expects fairly negative attitudes from farmers and hunters. Cougars seem to be more feared by people than wolves or bears, he said.

“It may be that if recolonization occurs slowly it will receive better support, but under current conditions, a rapidly growing cougar population would raise concerns,” he said.

Another debate over using hunting to manage carnivores could  well be around the corner, O’Neil said.

“Several states have cougars living right next to major population centers, and this hasn’t seemed to generate the same divisiveness as wolves have,” he said. “So maybe there is greater capacity for social acceptance.”

A large portion of Michigan’s Lower Peninsula is also suitable for cougars, despite the lack of confirmed sightings in this century. But cats will have a hard time reaching the area because it is surrounded by either water or urban farmland, according to Wydeven. Wolves have yet to colonize the area as well, he said. “My guess is that it will be decades and maybe as much as a century or more before breeding populations of cougars establish in the Lower Peninsula.”

The Michigan DNR has started confirming cougar sightings only since 2008. Not one of those confirmations was female. As a result, the agency’s official stance is that there is no breeding going on in the state, according to Kevin Swanson, the agency’s large carnivore specialist.

Rusz, who has a doctorate in wildlife ecology, has been tracking Michigan cougars for over a decade. He is critical of how state officials have handled cougar sightings, pointing out that the agency did not confirm any sightings until 2008, but has confirmed 28 sightings since.

Rusz testified before the Michigan Senate in 2009 that he has found plenty of evidence of cougar settlement in both peninsulas. Rusz said he believes that the DNR ignores such evidence because it doesn’t want to manage another endangered species.

He said he wants the agency to simply recognize its existence and begin managing for it.

The agency has put together a cougar team to keep up with the increasing sightings. The team is made up of biologists who investigate cougar sightings reported in both of Michigan’s peninsulas.

They have yet to find evidence of a breeding population, Swanson said.

2 thoughts on “Parts of upper Great Lakes could suit cougars”