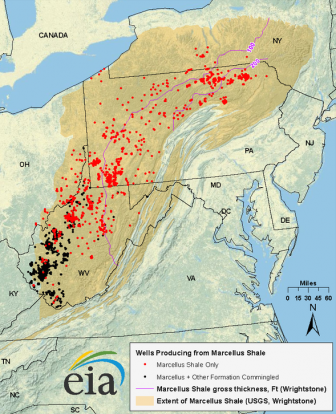 Two chemicals never before considered oil and gas industry contaminants, ammonium and iodide, were found in alarming levels in drilling wastewater discharged into Pennsylvania’s waterways, according to a recent study.

The Duke University study, “Iodide, Bromide, and Ammonium in Hydraulic Fracturing and Oil and Gas Wastewaters: Environmental Implications,” was published in the Environmental Science and Technology Journal. It sparked concern for both human and ecosystem health of Pennsylvania waterways and the fish that live within them, said lead author and Duke doctoral student Jennifer Harkness.

Researchers analyzed water from drilling wells in the Marcellus shale gas region for iodide, bromide and ammonium, she said.

They wanted to assess the variation in concentrations between different geological sites and extraction methods — conventional drilling versus hydraulic fracturing, Harkness said.

“We wanted to then see what happens when that water is discharged to the environment and how those constituents behave in surface water,” she said.

The results showed that ammonium was discharged to rivers at well above the Environmental Protection Agency’s aquatic life criteria, Harkness said. While there are no criteria for iodide and bromide in surface water, she said there is typically a limit to the total volume of salts that can be discharged, which was far exceeded. Iodide and bromide in oil and gas wastewater form salts called halides. Water treatment plants have difficulty removing them, she said.

Oil and gas wastewater in Pennsylvania is exempt from water quality laws, which is why the industry can still discharge it, even though its salt concentrations are much higher than the aquatic life criteria, Harkness said.

Avner Vengosh, coauthor of the study and a Duke professor of earth and ocean sciences, said it is not simply the chemicals like iodide, but rather the solutions they create when they run into downstream domestic water treatment facilities that can be dangerous.

“The iodide itself is not the risk,” Vengosh said. “The risk would be the possibility of the formation of those disinfection byproducts in drinking water utilities that are located downstream.”

The disinfectants meant to clean the water react with iodide to form more toxic chemicals, said Vengosh. This poses huge health risks for the people living downstream of drilling sites.

The ammonium, on the other hand, poses problems as is, Harkness said.

“Ammonium is toxic for aquatic life, so it can impact fish just on its own when it’s very, very high in the aquatic ecosystem,” she said.

Such issues with ammonium and iodide are not restricted to the Marcellus shale formation, but could be present in oil and gas operations anywhere, Vengosh said.

Joe Massaro, field director and spokesman for Energy In Depth, a research and outreach campaign launched by the Independent Petroleum Association of America, questioned the research.

“If you look in the footnotes at the bottom of the study, it’s funded by the Park Foundation — who have come out and openly stated that they oppose all shale development and their goal is to stop any shale development from continuing in any fashion across the country,” he said.

Pennsylvania oil and gas operators drilling in the Marcellus region recycle 95 percent of their wastewater in facilities at the center of their operations, Massaro said. The remaining 5 percent of the water is cycled through treatment and fracturing until it cannot be used anymore. It is then deep-well injected in Ohio.

“There’s a risk in everything — even the environmentalists will tell you that the biggest risk in any point of gas and oil development is just the trucks bringing things to and from the well site,” he said. “Human error can be the biggest thing, and that’s with everything we do in this world.”

One thought on “Pennsylvania study finds contaminants in drilling wastewater”